OOSTEND, Belgium – The largest summer beach festival in Belgium and one of the most popular in Northern Europe, “2 Meisjes op het Strand,” is known for more than just music. Also drawing thousands of fans and attracting a large national TV audience on Flemish network VTM are the breathtaking harbour vistas at the festival site. At this year’s event, Michiel Milbou and his team at Never Fear Shadows did justice to the festival’s music and its surroundings with a stunning stage and lighting design that featured 410 CHAUVET Professional ÉPIX Strip IP fixtures, supplied by Phlippo Productions.

Never Fear Shadows’ design concept for the festival was built around a 60m x 20m translucent stage structure built exclusively from the ÉPIX Strip IP fixtures. The structure provided sizzling visual support for the music of K3, Niels Destadsbader, Gers Pardoel and other stars. At the same time, it also allowed the audience (both live and television) to take in the beautiful scenic backdrop around the festival.

Unlike a black backdrop or video wall, which are the norms on large festival stages, Never Fear Shadows’ radical opaque ÉPIX Strip IP structure provided an interesting visual alternative for festivalgoers and television spectators alike. This was particularly important for TV viewers during sweeping panoramic shots of the festival.

“The long and thin batten shapes of the ÉPIX fixtures functioned as ideal building blocks for the structure whilst simultaneously doubling as the lighting sources,” said Milbou “As a result, we were able to fulfill all practical criteria whilst offering spectators a visually engaging experience. The intense brightness and pixel mappable effects of the fixtures allowed us to fulfill VTM’s wish to create a visually impressive installation – which looked just as good on television as it did live. What’s more, the excellent brightness ensured that we were able to use all of the fixture’s pixel mapping features during daylight hours too.”

Given the outdoor nature of the festival, the Never Fear Shadows team also had to take another important aspect into consideration: the volatile Belgian summer weather. Fortunately, the IP outdoor-rated construction of the ÉPIX fixtures ensured that all-weather operation was absolutely guaranteed.

“In addition to their excellent brightness and pixel mapping capabilities, we chose the ÉPIX fixtures specifically for their ability to perform outdoors,” continued Milbou. “Although the weather over the two days wasn’t as catastrophic as forecasted, it was nevertheless great to have peace of mind and the assurance of knowing that we would be ok if it did rain.”

While Never Fear Shadows’ ÉPIX design was able to fulfill the requirements of broadcaster VTM, the unique nature of the stage design ensured that this year’s festival won’t be forgotten in a hurry.

“The ÉPIX fixtures enabled us to transcend the typical lighting show by constructing a staging structure drawing heavily on architectural design,” concluded Milbou. “We’re very happy with the end result!” 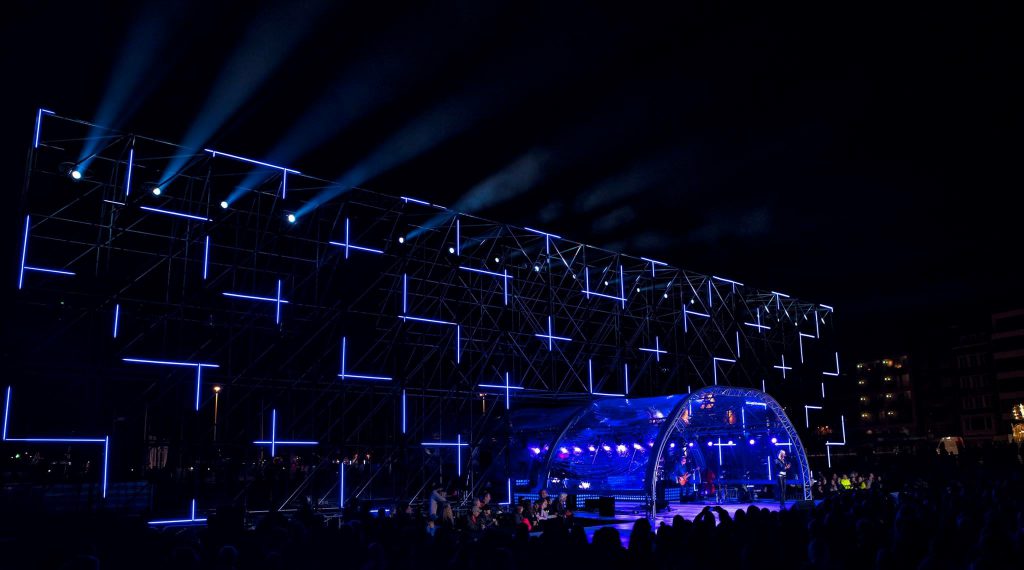