CHICAGO – Karen Zacarias’ “Destiny of Desire, An Unapologetic Telenovela in Two Acts” is aptly subtitled. The raucous, freewheeling “play within a play,” makes absolutely no apologies as it follows the lives of  two Mexican woman (one born to wealth, the other to poverty) who are switched at birth. Parodying the telenovelas commonly seen on TV, the play unabashedly takes audiences on an emotionally charged journey that is at turns, harrowing, hilarious and ultimately thought provoking. Intensifying the myriad of moods that runs through this fast-paced play is a richly textured lighting design by Pablo Santiago that features CHAUVET Professional Rogue R2 Wash fixtures.

Santiago is using 16 of the 285W RGBW moving heads to light the show during its current successful run at Chicago’s Goodman Theatre. He positions the Rogue R2 Washes over the stage in four different electrics from downstage to upstage. Each electric has four Rogue units per line set, dividing the stage into 16 top wash areas. This broad coverage allows him to use the Rogues to fill a variety of roles throughout the play, including stage washing, back and front light specials, strobing effects and soft beam architecture. 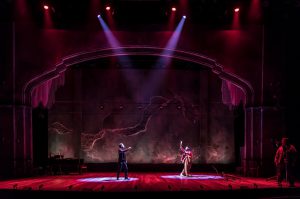 Directed by Jose Luis Valenzuela, “Destiny of Desire” opens with a telenovela being shot in an abandoned warehouse/theatre. The set, which is designed by François-Pierre Couture, evokes the feeling of being in an improvised studio by incorporating playful backstage props like scrims, billowy fabrics and misplaced title cards. The Rogue fixtures help bring this behind-the-scenes feeling to life by washing the scenery in a variety of colors.

“The premise of the play is that a group of actors take over an abandoned theatre and create a theatrical experience with the elements they find there,” said Santiago. “So at times, the lighting has to create the mood of a ‘poor’ theatre. Our director has done a brilliant job conveying this and of transforming the simple movements of such a theatre into operatic gestures. Even the transitions in between scenes were choreographed and timed perfectly. The director had titles for them like the ‘dance of the chairs,’ and the ‘ballet of crystals.’ I had to interpret these concepts visually.”

Weaving lighting into the fabric of the play was key to Santiago’s interpretation of its meaning. “My design is meant to be an alive and overt element in the play and to support the heightened reality of the telenovela,” he said. “This is why my colors are intense, the patterns exaggerated and larger than life, bold and expressionistic.  There are elements of film noir when it comes to the light contrast, light angles and gobo use, as well as the romantic and syrupy feel of a fairytale, in this design.” 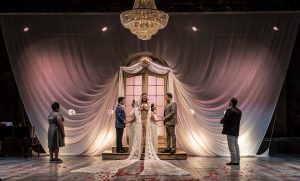 Santiago views his lighting design as part of a larger collaborative effort. “I am in favor of lighting design that has its own dramaturgical point of view so that it can work in with sound, costuming, music, script and acting, etc. This creates a richer experience for the audience,” he said. “John Zalewski in sound, costume designer Julie Weiss and music director Rosino Serrano all contributed to the mood we created on stage, as did my assistant Greg Hoffman and the entire crew at the Goodman. I compare it to music, where a chord will be a richer sound than a single note.”

Like the characters in “Destiny of Desire,” Santiago’s lighting design has evolved and grown. Having collaborated with Valenzuela for six years, he worked on the world premiere of the play at the Arena Theatre in Washington, DC and later lit it for its second showing at the South Coast Repertory in Costa Mesa, CA. He used different wash fixtures on each of those engagements, but decided to specify the Rogue R2 Wash when the play moved to Chicago.

“I missed the flexibility of what the movement and zooming features of the Rogue could give me, compared to what I got with the other fixtures,” he said. “So when we went to the Goodman and the master electrician asked me which fixture to rent for this production, I immediately requested the R2 Wash. I had used the fixture before. I love its flexibility, speed and color subtlety. It’s a light that is certainly up to the challenge of handling the complexities of a play like ‘Destiny of Desire.’” 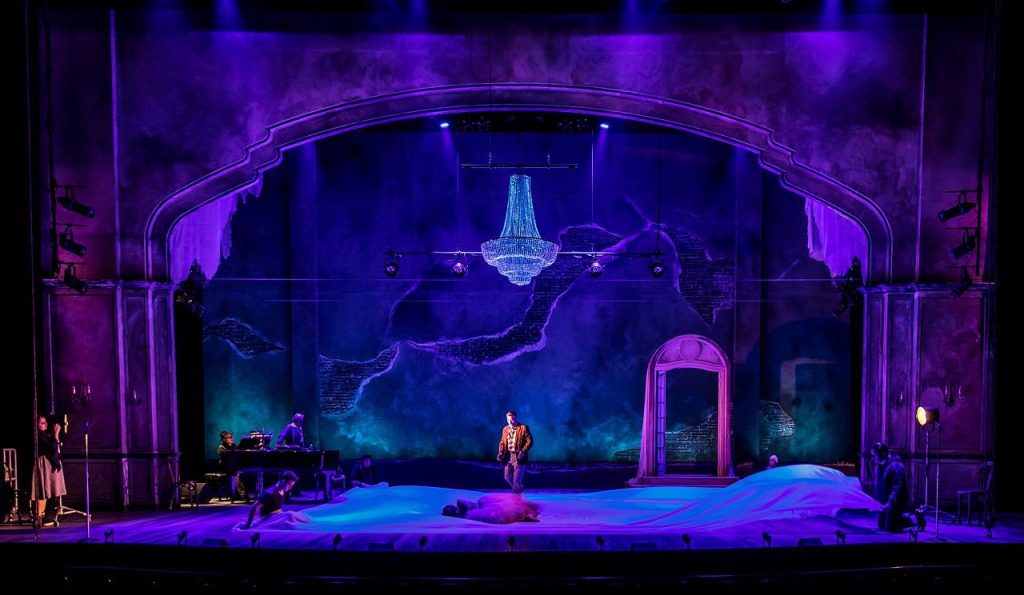