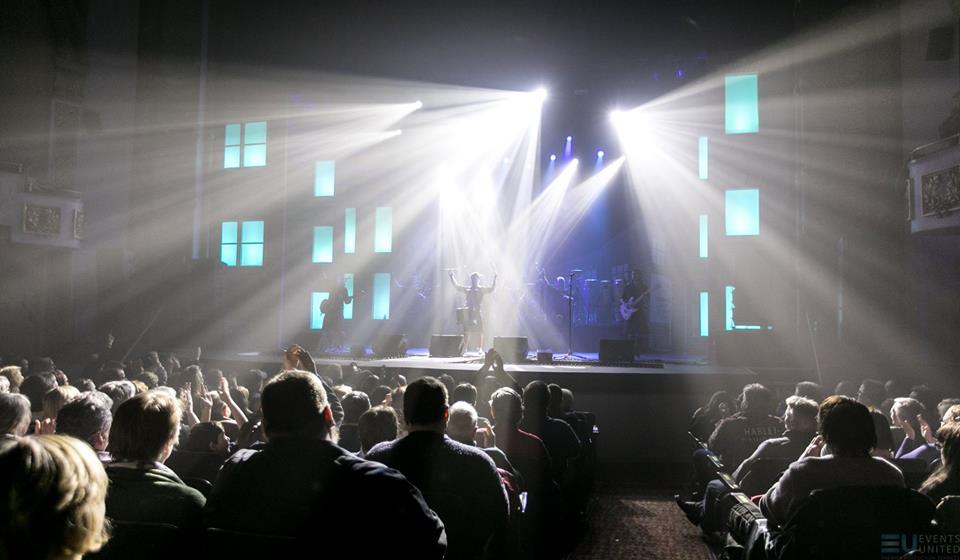 MANCHESTER, NH – Crossing genres in lighting is nothing unusual for Morgan Cerovski. The technical director at the 880-seat Palace Theatre, Cerovski is accustomed to having his rig light theatrical productions on weekends and then turn around with virtually no changes to serve up eye candy for a visiting band on Monday. Such was the case on March 10 when the Palace stage welcomed the Red Hot Chili Pipers after just completing a Friday-Sunday run of the musical Hairspray.

Like the Palace lighting rig, the Scottish “bag rock” band (not to be confused with the Red Hot Chili Peppers), is also accustomed to bending – make that breaking! – barriers.  Praised by none other than Sir Paul McCartney, who calls them “my boys,” the band performs a unique, upbeat fusion of bagpipe and rock music — think “The Hills of Argyll” meets Queen. Keeping pace with their high energy performance at the Palace were 12 fast moving CHAUVET Professional Rogue R2 Spots, purchased from Events United.

A night earlier, those Rogues were performing very different functions as stage lights.  “The Rogues have proven to be very durable and versatile,” said Cerovski. “They are a permanent part of our rig for the musicals that are performed here. However, they make an easy transition to light the visiting bands. All of their components operate at a fast, accurate pace, and they have a wide range of effects and textures. Their 240 watt light source is bright enough to punch though all the other lights in our rig, even with a saturated color or a texture. The diffusion is also an easy way to add another wash option if necessary.”

For the Chili Piper show, two of the Rogue R2 Spot fixtures in the Palace rig were positioned four feet off center on the first electric, while three of the units were on the second electric (one at the center and one eight feet to either side of the center).  The remaining Rogue units were positioned two on the third electric (four feet off the center to match the first electric fixtures), and five on the fourth electric. The fourth electric Rogues were configured to have one unit at the center and the remaining four fixtures spaced evenly at four foot increments.

The first electric Rogues were used primarily for front and down specials, while the second and third electric Rogues were relied on to create engaging angles and patterns in the haze as well as for back light specials and movements. The Rogues in the fourth electric provided back light break ups, movement and a variety of unique looks, all of which are critical to the Red Hot Chili Pipers stage presence. 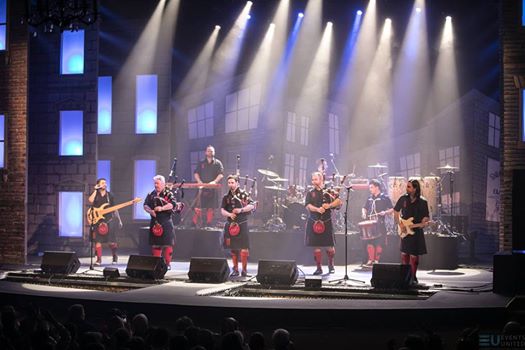 “We use eight of the COLORados in our typical musical rig,” said Cerovski. “They’re versatile, so they fill different roles in these productions. For the Chili Pipers, we had them on the fourth electric as back washes and on booms in front of the proscenium for an angled side light wash– shins, mids and head heights.  The back lights look really cool when they were zoomed at 8 degrees. They almost look like laser beams.”

Although he now takes moving from theatrical production to touring band show in stride, Cerovski admits that when he started at the Palace, he had questions about overnight genre-switching. “I was afraid that working with our rig would be an issue with the touring acts, but they all seem to enjoy the challenge of using what we have mounted for our musicals into their show. Andy Pattern, the LD for the Chili Pipers was great to work with. I think that just like me, he thought the process of moving from Hairspray to this band was a lot of fun.”