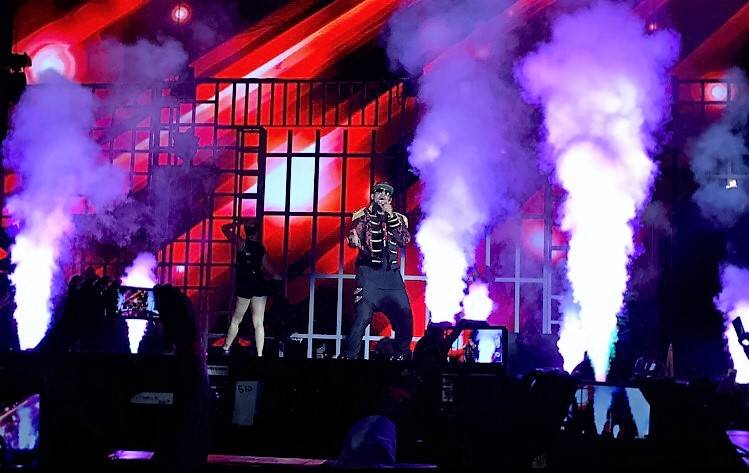 SUNRISE, FL – R. Kelly’s Buffet Tour reflects the drama and transitions that have been such a riveting part of the R&B legend’s life and career. This much is evident right from the concert’s start. Before the multi-Grammy winner even appears on stage, the audience is captivated by a haunting scene right out of a horror flick, complete with scary backlighting, eerie full moon images and a menacing bat-like drone flying overhead. When the star himself finally emerges, it’s as if he’s rising from the stage. Dressed in grim reaper black with large feathered wings, he is made all the more mysterious by shooting bursts of fog that appear to be triggered by his steps as he walks to the lip of the stage.

Russell Armentrout, President of Performance Lighting, came up with the fog burst concept after a design concept meeting with R. Kelly. Performance Lighting made it happen with the help of lighting director Tony Trovato by using a collection of 24 Vesuvio RGBA high-output LED foggers from CHAUVET Professional.

“The concert is really an unfolding story told with music, words, effects and lighting,” said Armentrout, who serves as the lighting and creative designer of the tour. “There are a lot of wildly different elements pulled together here, kind of what fans expect from R. Kelly. The show is all about the transition from evil to angelic, so we rely heavily on effects to set the tone of our ongoing story.” 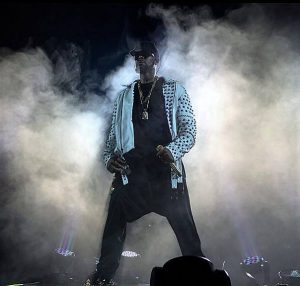 Armentrout has arranged the Vesuvio RGBA units along the stage on both sides and the front. He also uses some of the units on a custom runway and in an FOH toaster that R. Kelly pops out of at one point in the concert. “They’re versatile fixtures,” he said. “We don’t use them only as foggers, but also as replacements for pyro effects and as washes. Interestingly, Rob (R. Kelly) wanted CO2 jets at first, but we convinced him that the Vesuvio would not only be more affordable, but would also allow us to do more. Now he loves them!”

Although all of the Vesuvio RGBA units are run simultaneously when the show opens, Trovato, who controls the large Performance Lighting rig with a grandMA2 full size, uses the LED foggers more selectively at other points during the performance. “We get a tremendous response when we run all the units at once,” he said. “It’s very dramatic. But we also get some great looks when we time code the Vesuvios to come on individually in various sequences. It’s not only evocative, it also creates a sense of movement on stage.”

Changing the color of the LED light that shoots through the plumes of fog also adds impact and emotion to the story that unfolds during a Buffet Tour concert. Early in the performance, when the star is in his “evil” mode singing tunes like “Make It Rain,” the puffs of Vesuvio fog are illuminated in ominous and brooding hues. Later when the two-hour concert moves to a more reflective mode and the star’s silky voice is captivating the audience with a gospel-like version of Sam Cooke’s “A Change is Gonna Come,” the Vesuvio units create a softer look.

“Without a doubt, the Vesuvios are a key part of our show,” said Armentrout. “We use them at six or so critical points, changing colors to reflect the changing mood of the story we’re telling. This show really is different than your standard concert, because it involves a lot of storytelling. Having an atmospheric effect like the Vesuvio allows you to set the mood for the story better than you can with lights alone.”