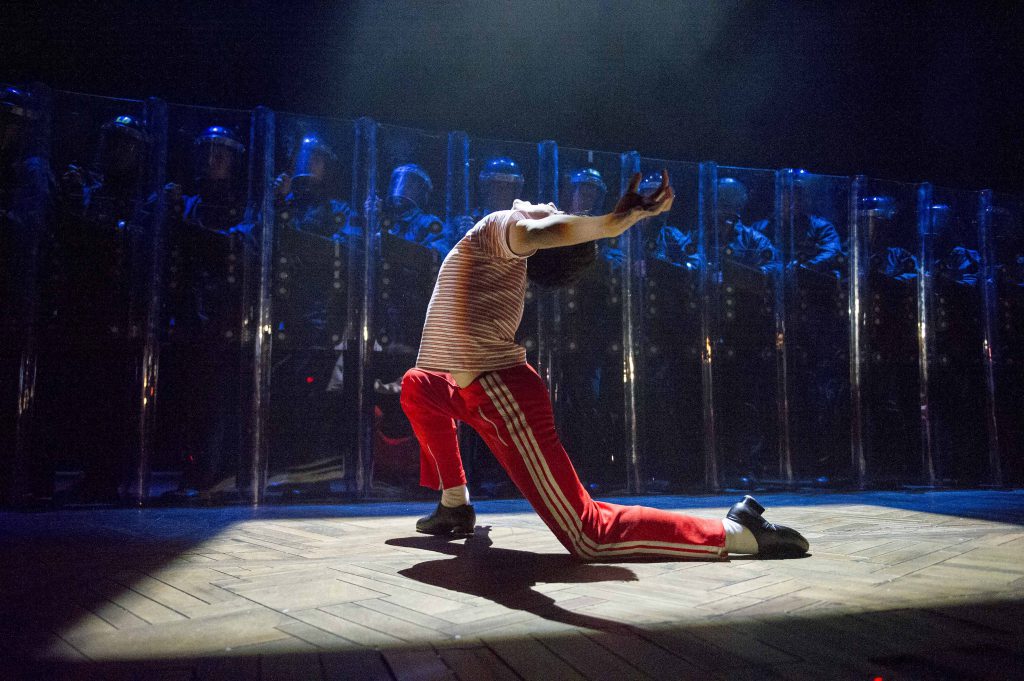 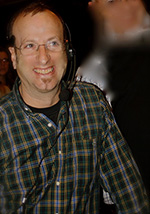 Lighting walks a fine line in this Tony Award-winning designer’s creative process. Although never drawing attention to itself, it must always be engaged in shaping the story that unfolds on stage. At its best, he believes, a lighting design should fit the core meaning of a production so naturally, that it seems virtually inevitable.

Creating contrasts and deepening the unspoken emotions that underlie every narrative, Fisher’s designs quietly, but inexorably, guide audiences on a journey of discovery. Over the past 30 years, he has applied his organic design philosophy to a wide range of genres, from musicals and conventional dramas, to opera and ballet. He’s earned the universal respect of his peers along the way, having won two Olivier Awards in the UK, in addition to his two Tonys and the Enrico Caironi Lifetime Recognition Award at the 2017 Knights of Illumination.

Born in Philadelphia, but a resident of London since the 1980s, Fisher is the former chair of the Association of Lighting Designers in the UK. Speaking to us from his UK home, he shared his insights into the design process, including his seminal work for An Inspector Calls, which has served as an inspiration for lighting designers throughout the world.

You’ve always been unafraid to use darkness in your designs. For example, in scenes like the “Dream Ballet” in Billy Elliot: The Musical, you created some powerful emotive scenes with minimal light. Can you tell us a little about how you view darkness as a tool in lighting design?
“The perception of light is really about contrast, so being able to surround things with darkness just helps the light be more powerful and means you can often use less than you thought. It is often not what you turn on, but what you turn off, that gives the stage picture impact.” 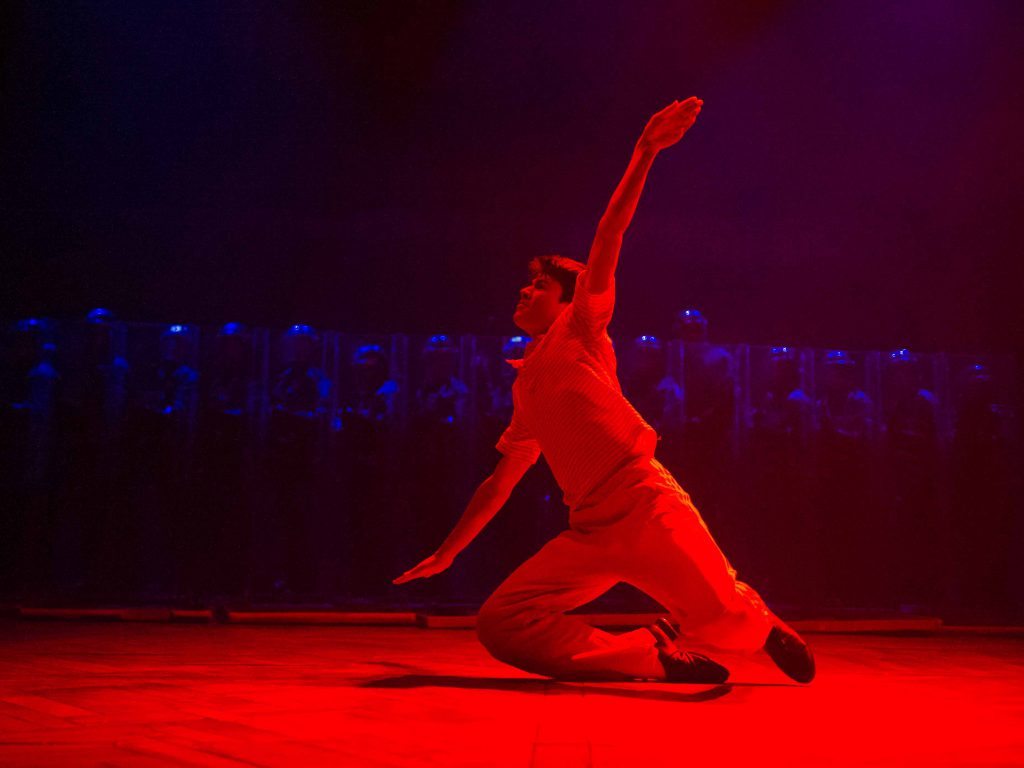 Many concert lighting designers tell us that being former or amateur musicians helps them in their work. You were an actor in college and did some summer stock. Has this influenced or aided you in designing for theatre?
“I think it was more my general crew work that has helped me more. I really value all the different skills and types of people it takes to get any show on.”

You’re known as a wonderful collaborator. What is the secret for working well with directors and set designers?
“I think my background being in different departments and having wanted to be a stage manager before I found that lighting was something I could usefully contribute to the production is what I hope has made me a good collaborator. I hope that others think I am a good collaborator; I am not shy of saying my opinion about any aspect of a production, which some of my colleagues do find hard sometimes!”

When you take on a new project, how do you get started creatively? What are the first things you look at when you begin your lighting designs?
“I still find the blank piece of paper very scary and will do anything to avoid adding the first lights to a plan. I look at where I can deliver different types of light to the stage, different angles of light, different colors (if needed), and different qualities of light to each area of the stage from each area of the rig. I then have the tools that I can select from during plotting and tech sessions. I am really interested in being able to see the performers’ faces clearly, whether in a dark or a bright scene, so I guess I start with how am I going to be able to light the people.”

You’ve done some impressive design work for Covent Garden and the New York City Opera. How does designing for opera compare to designing for theatre?
“Almost always in opera you are in a rep situation where you are sharing a stage and a lighting rig with other productions. I like the challenge of extracting the right lighting for the production out of these standard rigs. But the biggest difference is time. I have been doing operas in Santa Fe for over 20 years. When I work there, the entire amount of time I have with performers on stage under light is 10 hours! That is about one day of tech for a major musical or a play. So that is why bigger bolder strokes are often what you get, and followspots to keep the principals in focus.” 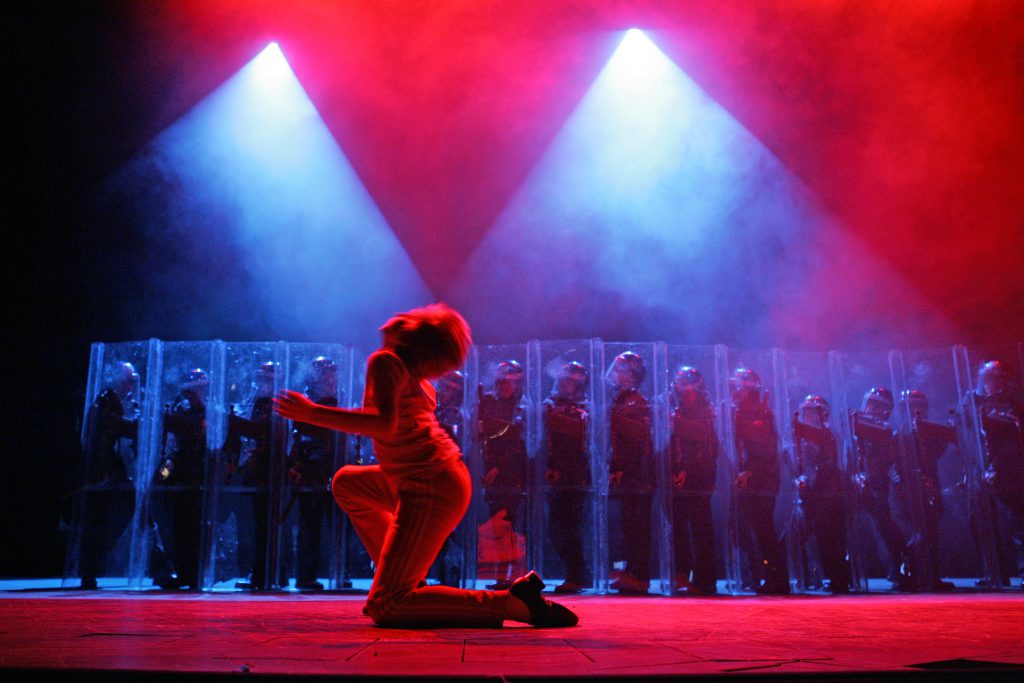 Do you have to like a show on a personal level to do a good job designing for it?
“It really helps to like what you light; you spend a lot of very intense time with each piece. Sometimes you do not know until it is too late that the piece is not to your taste, but that is a luxury sometimes and you still have to light it well.”

You won your first Tony Award for An Inspector Calls. Like Billy Elliot, that play is now regarded as a classic. Can you tell us a bit about how you approached that design project? How is it different lighting a taut mystery like that, as opposed to a comedy or musical?
“Inspector was such a surprising journey and one that I am so happy to have been on. We’re actually hoping for another tour this year. It is a very theatrical version of what might otherwise be perceived as a rather traditional play. The fantastical environment and the director/designer vision allowed us to push the visuals organically, creating what has become a classic, yet still something that feels modern to me. A lot of the design look for Inspector was determined by what looked good on the set, and slowly the show told me how I wanted to light it. Brightly isolating characters in a landscape that felt dark. Inspector uses a lot of modified side light to achieve this look, so it feels as if the actors glow in the landscape and carry the light with them as they move. It was not a conscious goal but more of a realization of what worked and carrying on and refining that look.”

You’ve used some beautifully saturated color washes in shows. What are the concerns you look at when using color? Can you over-use it? How do you balance the use of color on stage with getting the optimal key lighting on the actors?
“I think each lighting designer ends up having a personal relationship with color. I usually light people in a very narrow range of color that goes from just either side of open white to half correction blue. But I do like to add saturated color to the environment when I can. It can add to the contrast of the overall piece, and it can be like a glass of water when you are thirsty. After a lack of color, some saturated color really can refresh your eyes.” 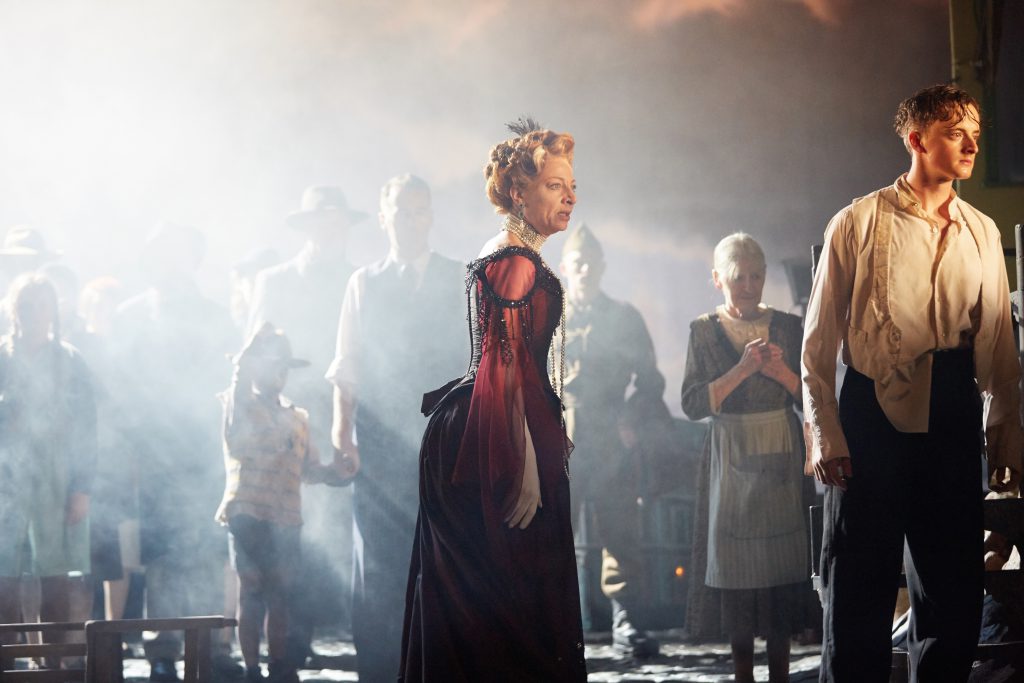 Having designed at many of the world’s most prestigious venues, do you have a favorite theatre to work in?
“Oh, that is like trying to ask you which child you love most. I do love working at the Santa Fe Opera. It’s a beautiful site with some natural light that surprises and delights and a fantastic team of people who really want to create great work.”

How did you get started in lighting design?
“I did everything back stage and found that I seemed to get put on more lighting calls than anything else. It was a lot easier and more fun than building scenery. Eventually small companies started asking me to do the lighting, and I billed myself as a lighting designer, not a stage manager.”

Who were the big influencers in your career?
“There was a fringe lighting designer, Steve Whitson, who was a big inspiration to me and to Paule Constable; he was the first person who made me think that lighting was a real participant in any performance and that lighting and lighting designers could be fun and outrageous. I miss him.” 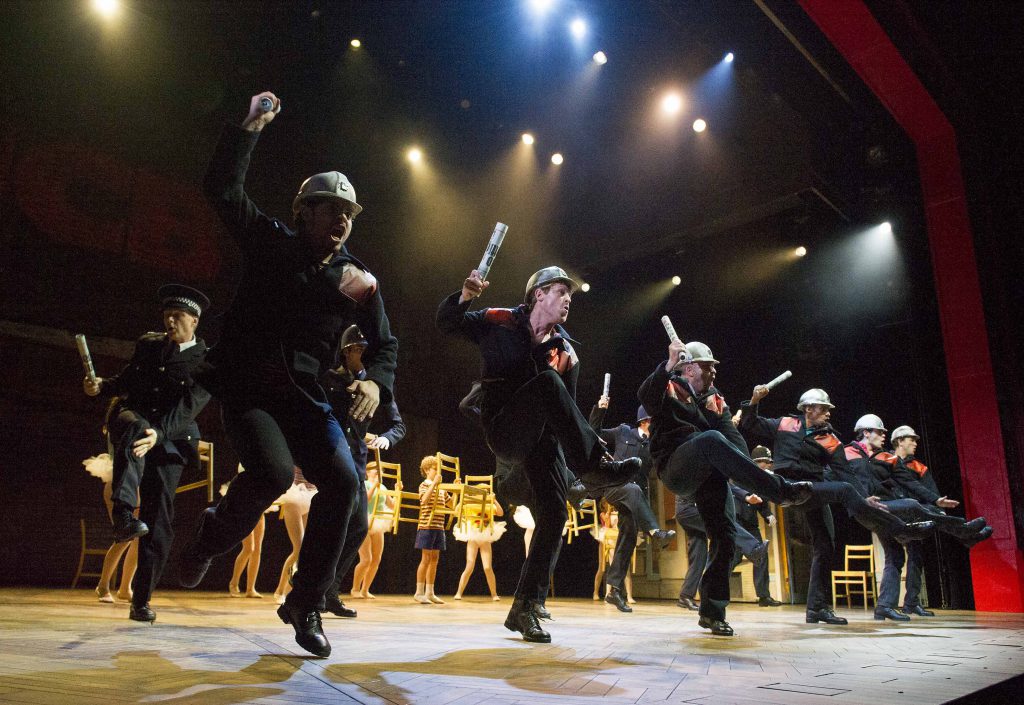 If someone asked you at a party what exactly do you do as a theatre lighting designer, what would you say?
“I would make some jokes about turning lights on and off, but if forced to be more serious I would offer that I hoped the lighting acted as a way into the show, supporting the audience in what to think or feel at any time. The audience should not really have to think about the lighting. It is often said the lighting should be invisible. I prefer to say that lighting should not be invisible (though at times that is what is needed), but it should always look inevitable! Even bold and in your face lighting should hopefully look inevitable like it just had to look like that without any doubts or thought.”

How do you think new technology, such as LED fixtures, projection video and LED video panels, have influenced stage lighting design?
“They just give us more wonderful tools and flavors to play with. Now we can do so much more and have much more choice of how to achieve anything we want. That can be quite daunting, and it is important to not get too seduced by trying to do everything we can. I have strong views of how video should be used, and when it is used well it can be a great tool. This creative use of video is now much more common than some of the mundane scenery replacement role that early video and projection filled. But all of the tools we have should try to be in service to the story we are helping to tell and to spur the audience’s engagement and imagination.”

Is there any one thing that you would like to see changed/improved in theatre productions?
“More time in the theatre to really collaborate and experiment. The lighting time is often the most fraught time, not just for the LD, but for the director and other designers, not to mention the performers and crew. So that tension can sometimes constrict the creative work!”

How would you like to be remembered as a designer?
“I have not really thought about that. I think if some of the images of the shows and the whole shows live on, that would be great — as someone who worked on great projects, was fun to work with and contributed to standing of Lighting Design in theatre, that would be just fine.” 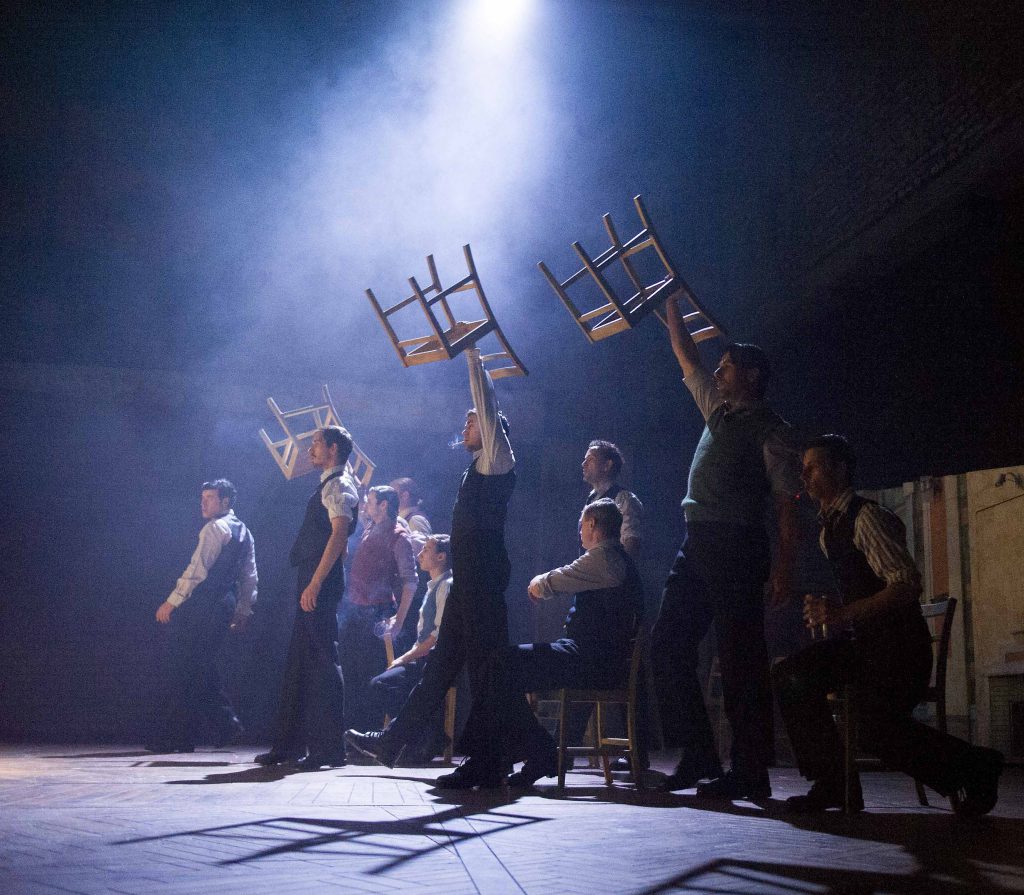