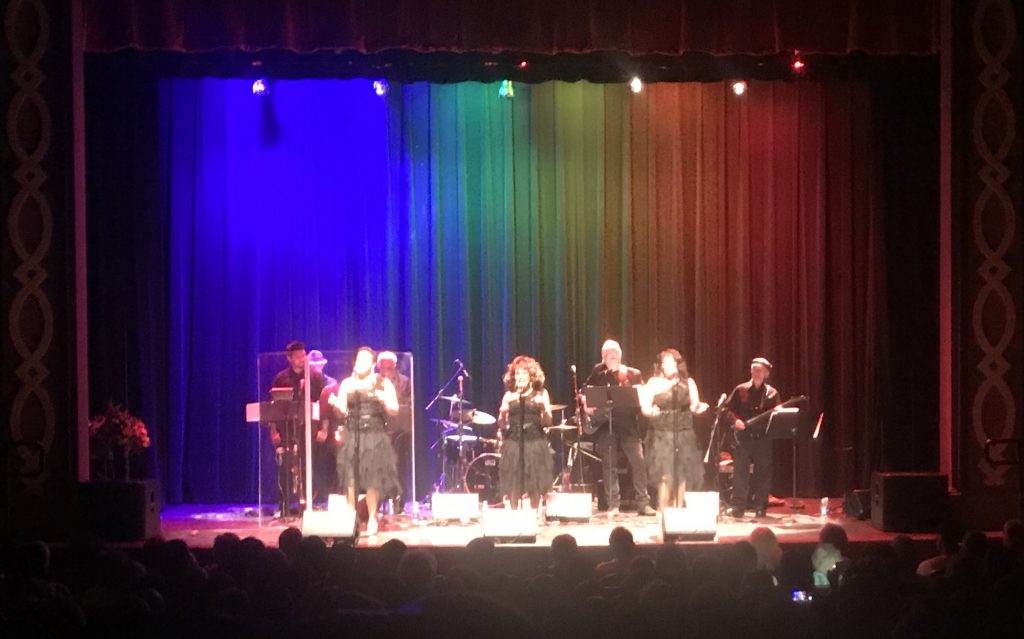 LAS CRUCES, NM – Technological innovation is nothing new at the Rio Grande Theatre. Opened on July 29, 1926, as a silent movie hall, the two-story building was retrofitted three years later with sound equipment, making it among the earliest theatres in its state to show “talkies.” It was also the first business in Las Cruces to be air conditioned.

History repeated itself earlier this year, when the iconic venue, which now hosts a diverse mix of theatrical productions, concerts and special film showings, took a technological step forward by replacing its old stage lighting with a new LED system that features a collection of CHAUVET Professional fixtures supplied by Hubbard’s Music.

“This project involved replacing the existing conventional fixtures that Rio Grande was using,” said Will Sadler, Project Manager for Hubbard’s Music. “The theatre wanted a more flexible lighting system to handle the wide variety of shows it hosts. It also wanted to reduce the heat load in the space and bring down costs. This was not a straight one-to-one fixture trade. The venue’s mission has changed since it last installed a lighting system, so the new system had to represent a new approach to reflect the variety of new uses.”

A look at the theatre’s recent schedule shows the extent of its varied functions. There alongside Purple Rain, a Prince tribute, is a theatrical production of Peter Pan, followed by a classical musical recital, then more shows and concerts of various descriptions. “The space is regularly used to host a variety of small concerts and recitals, in addition to the more traditional theatrical performances and rock concerts, so we wanted to design a flexible rig that would allow the venue to go from the controlled, dramatic effects called for in theatrical performances, to the splashy color chases for rock shows,” explained Leigh Harvey, Project Lighting Designer.

With this in mind, the Hubbard’s Music team installed five Ovation E-160WW warm white ellipsoidals and an equal number of Ovation E-910FC RGBA-Lime color mixing ellipsoidals for front lighting from the catwalk position. This gave the theatre an optimal balance between full color and warm white stage lighting without the use of gels.

“This was the first time I’ve used the E-910FC,” said Sadler. “I am very pleased with the range of intense colors this fixture produces. It still amazes me that we don’t need to deal with gelling and focusing a bunch of extra fixtures just to get a four-color wash anymore. Anyone who has had to climb a catwalk ladder more than once will appreciate how much of a difference this makes. Our lighting designer decided on the OEZOOM 1530 lens tubes for the ellipsoidals to give them the most flexibility to go from theatrical productions to concerts.”

For down lighting, 20 COLORdash Par-Hex 12 wash lights were installed between the first and second electric. “This was a bit of a challenge, since space between the line sets was limited,” said Harvey. “The compact size and high output of the COLORdash made it work well here. We put ten of them on each electric, which provided more than enough down light and evenly covered the stage. One of the big bonuses with the COLORdash is the UV feature; the venue has wanted to use UV in the past and the COLORdash Par-Hex 12 really delivers a great punch of UV.”

On the third electric, six Ovation C-805FC static wash lights were positioned. “The color range of these fixtures adds a great deal of versatility to the rig,” said Harvey. “I know that Chris Linninger, the House LD at Rio Grande, is very happy with this, because he never has to change a burnt cyc gel again!”

To add extra color to selected shows, the Rio Grande rig also includes six Ovation F-915FC Fresnel units, which are moved to different positions depending on production requirements. The motorized zoom and 30° – 85° field angle of this fixture greatly adds to the versatility of the new lighting system, according to Harvey.

A feature in all of the CHAUVET Professional fixtures that has made the retrofit go smoothly is their power linking. “Being able to power link fixtures together really cuts down on how much needs to be done to retrofit electrics,” said Harvey.

“Everyone involved in this project really enjoyed it,” said Sadler. “We’ve heard from people around the community who tell us they can see a big difference in the production quality of the shows since the lighting upgrade.”

Describing the Rio Grande Theatre as a crucial part of the Las Cruces community, Sadler believes that the lighting upgrade is viewed by the local population as an investment in the future of entertainment in the area. Of course, that’s a commitment that the Rio Grande has been reaffirming since it showed its first talkie over 85 years ago.