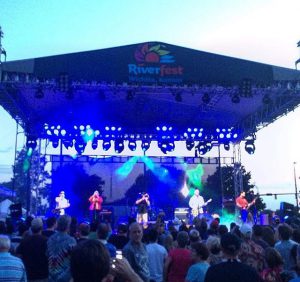 WICHITA, KS – For the first 36 years of its existence, the Wichita Riverfest was held in May. Then in 2011, after rain put a damper on successive festivals, the event’s organizers figured that moving it to June might change their luck. How right they were. Attendance has risen steadily since the rescheduling, ultimately breaking a record this year when a crowd of 450,000 visitors turned out for the nine-day celebration — not a bad draw, considering that Wichita’s population is 390,000.

A key attraction at the festival was the main concert stage, which featured 29 different bands performing under the light of an Erich Meitzner-designed rig that featured a collection of Rogue fixtures from CHAUVET Professional, supplied by Parr Sound and Lighting of Great Bend, KS.

Meitzner positioned four Rogue R2 Beams on mid stage truss and four additional units on upstage truss. He also flew eight Rogue R2 Washes on a truss beam that ran across the entire 40’ festival concert stage. The fixtures were selected for their intensity, color and brightness to be sure, but especially important to Meitzner in this instance was versatility.

Aside from featuring a large number of bands, the Wichita Riverfest stage showcased a diverse range of musical genres, from the city’s symphony orchestra to ’90s rappers Naughty By Nature, to The Roots, Elle King, Fishbone, Violent Femmes and Meat Puppets. 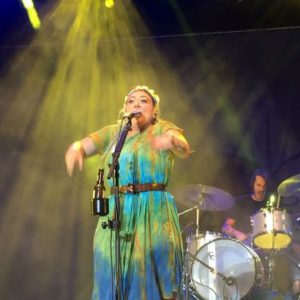 “It was absolutely essential for us to have a versatile rig that was capable of providing different looks for different nights and different genres,” said Meitzner. “Although we had a lot of different bands, not one of them brought their own floor package. So our festival rig had to cover a wide range of moods to reflect the different styles. The Rogue R2 Beams really helped us achieve this versatility. We used its split colors and rotating prism a lot to create some unique looks for all of the bands, so we never repeated ourselves throughout the whole event.”

Meitzner also relied on the intense output of the Rogue R2 Beam for aerial effects and audience lighting at the outdoor event. “Festival lighting calls for a lot of audience engagement,” he says. “So we like to touch the crowd with our lights.”

The Rogue R2 Washes arranged over the downstage deck were called upon to wash the stage in color. “Our deck was 40’ by 40’,” said Meitzner, who ran is rig with a grandMA2 Light.  “We definitely needed powerful fixtures for the coverage they could give us. Color was another key in setting the tone for the different acts. For some of the softer country/folk acts, we bathed the stage in pastels; for others, we ran intensely colored gobo patterns.” 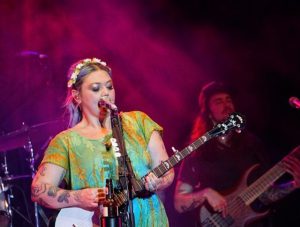 The performance of Meitzner’s rig was not lost on Parr Sound and Lighting’s Aaron Parr, who served as production manager of the festival.  “”Using the Rogue fixtures for the first time this year at Riverfest really helped pump up the level of production,” he said. “This was a year of bigger entertainment for the festival; using Erich and those fixtures was a big win.”

Aside from the impact of its new lighting rig and stepped-up entertainment, the 2016 edition of the Wichita Riverfest was helped by another factor – the weather. “One of the big challenges at this event is always the weather,” said Meitzner. “Normally it rains at least one day at the festival, but this year, not a drop of rain.”