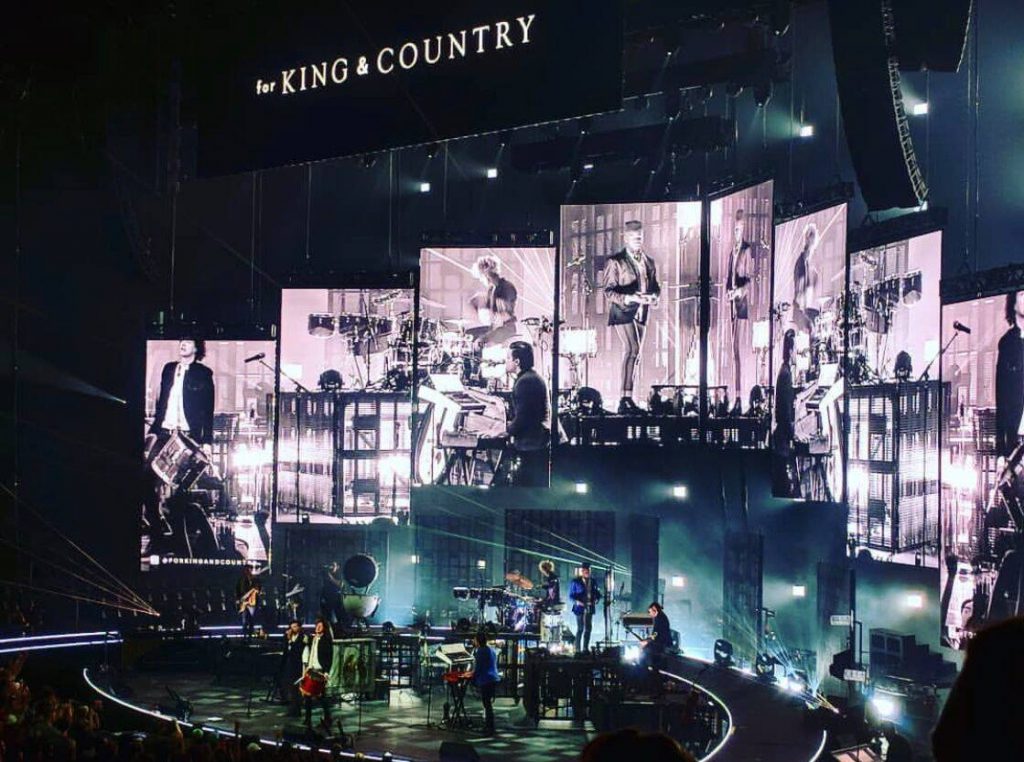 KNOXVILLE, TN – In a good lighting design, every fixture works in harmony with all pieces of the rig to create a unified look that serves a greater goal. Daniel Smallbone, owner of Lumina Design, was looking for a fixture that could help him achieve this kind of balance at the CHIC Unite Christian youth rally held this July at the University of Tennessee.

Smallbone wanted something that had the output to stand up to the massive video walls at the conference, yet was versatile enough to accent a custom-built 55’ deep by 70’ wide C-shaped catwalk, while still providing aerial effects and specials during the five-day event. He found the lighting puzzle piece he was looking for when his lighting supplier, Bandit Lites, recommended the CHAUVET Professional Rogue RH1 Hybrid.

“We knew that with the amount of video we had, we would need something that was brighter than your typical profile fixture,” said Smallbone. “The option we first considered in profiles was bright, but it wasn’t versatile enough, so Shawn Lear at Bandit suggested the RH1. We were impressed with its brightness. Plus, the punch and prisms were a great fit with the edge lights that outlined our catwalk.”

Centered around the branding theme of the CHIC Unite event, Smallbone’s design featured an automated LED system that could move up, down and left on a track. “For lighting, the main focus was enhancing the stage and LED walls, while creating extra depth and width,” said Matt Brewer, who worked with Smallbone at the conference.

Smallbone and Brewer positioned 12 Rogue RH1 Hybrid fixtures on the C-shaped catwalk’s upstage base and used them for aerial effects, side lighting and stage washing. An additional 16 Rogue RH1 Hybrid units were flown on midstage and downstage truss and provided downlighting, specials and audience washing.

Drawing on the dual gobo wheels, tight beam angles and wide zoom range (18˚ to 38˚ in wash mode), the Lumina design team was able to conjure up a seemingly endless variety of looks throughout the conference, which drew 4,500 students from across the United States.

Regardless of which role they played, the 330-watt Rogue RH1 Hybrids had no difficulty showing up against the myriad of video walls. “We had a 64’ wide by 32’ deep stage (plus a bull nose and the custom-built catwalk),” said Brewer. “Running the width of the stage and beyond were video walls of different shapes and sizes. It didn’t matter if we ran the RH1 fixtures in beam or spot mode, they were more than bright enough to show up without requiring us to hold anything back on the video output.”

Lumina Design was brought into the CHIC Unite project by Ethan Pangliaro, the Technical Director of the conference. Along with Executive Producer Angie Wysocki, Producer Greg Dolezal, and Stage Manager Corbin Hand, Pangliaro provided a supportive environment for the Lumina Design team.

As Smallbone noted: “CHIC Unite was an event where everything really came together.” That was certainly true of all the varied elements of Lumina Design’s beautifully balanced lightshow.