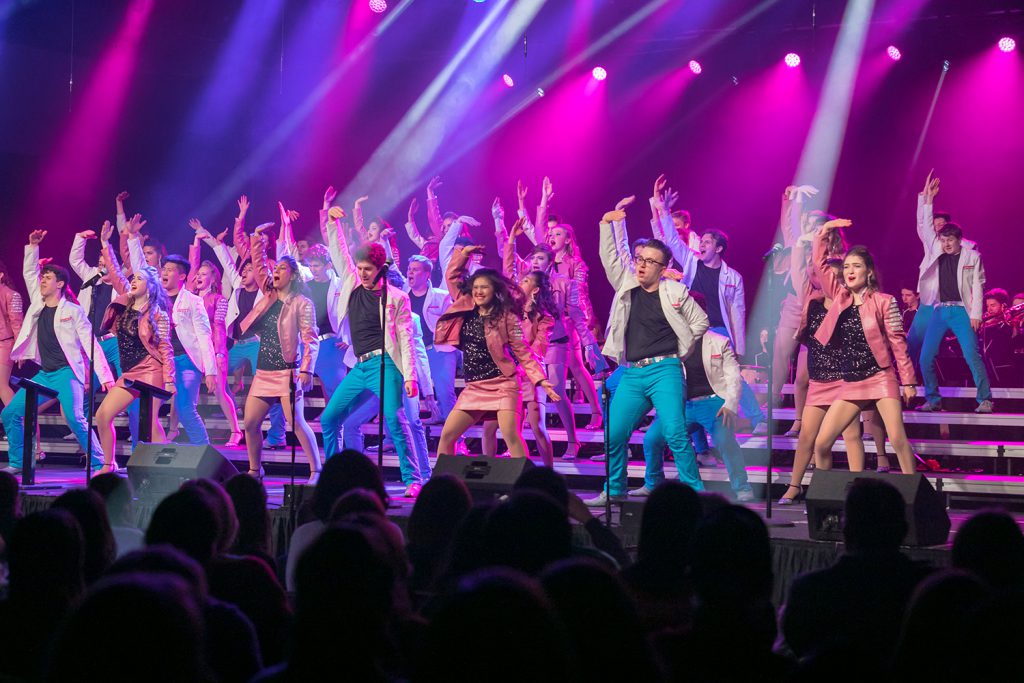 CHICAGO – The stage was set up to resemble a wrestling ring, but the 1000 or so students from four states who gathered at suburban Naperville North High School recently didn’t “duke it out,” they belted it out, in the form of beautifully sung and choreographed musical arrangements. Their spirited performances were part of the third annual “Clash of the Sequins,” a competition involving 22 show choirs from across the Midwest that raises funds for performing arts programs.

Providing a sparkling and rocking high-energy visual backdrop for the day of non-stop singing and dancing was a Garrett Vander Veen-designed lightshow, anchored by 48 Rogue R2 Wash fixtures from CHAUVET Professional. Vander Veen, owner of V2 Productions, covered the entire 48’ wide by 32’ deep stage with his Rogue fixtures, flying eight of them on upstage truss, 24 on the midstage “claw,” and 16 on a downstage truss.

“In the three years since it started, Clash of the Sequins has developed a large following for being very production-heavy,” said Vander Veen. “We decided to embrace this look more than ever in 2018 — and nothing says big production like a 1980s rock show rig, which is exactly what sparked the concept for this design.

“It’s not all rock and roll though, and that’s where having R2 Washes was really nice,” continued Vander Veen. “We could do anything with the Rogues, from creating wide wash looks all the way down to tight ACL looks, and anything in between. The Rogues in the claw also gave us some nice movement on stage without the risk of blinding everyone in the audience. The versatility of this rig in this space is going to be very hard to beat next year!”

The Rogue R2 Washes on the upstage truss functioned primarily as backlight for the choir, in addition to providing some ambient light for the instrumental combo’s conductor, according to Vander Veen. These units also functioned as work lights during changeovers, ensuring that the upstage ramps and deck were well lit for safe transitions. The downstage Rogues were used effectively for washing the performance area with consistent front light.

However, it was the Rogue R2 Wash units flown on the midstage truss that were “the stars of the show,” said Vander Veen, helping to create a diverse and ever-changing array of looks. “These fixtures carried out the majority of the effect lighting for this event,” he commented. “They went from producing theatrical grade top lighting, to rock and roll-inspired ACL looks, and then, in almost no time, flew out into intense aerial movements during the crazy dance breaks.

“By arranging the Rogue fixtures in a grid, we had a lot of options, not only in terms of movement effects and positions, but also regarding intensity and color effects,” continued Vander Veen. “This really helped to keep things interesting throughout the 16-hour competition. Really, even after all that time, we still had some tricks up our sleeves to keep things interesting.”

In addition to its 48 Rogue R2 Wash units, Vander Veen’s rig featured eight STRIKE 4 multi-formatted warm white fixtures that he positioned on the downstage side of the claw. “We had to be careful about how often these were utilized, because the judges need to see every second of the performance,” he said. “We definitely couldn’t ride the blinders throughout the whole show, but we did have some leeway on the big hits and during moments of audience interaction. The impact that the STRIKE 4s brought to the table at these moments was stunning, because we used them so sparingly.”

Although Vander Veen’s lightshow looked as seamless as the most brilliantly choreographed arrangement, pulling it all together involved clearing a number of hurdles, the biggest of which was finding space for his rigging. “Usable steel was not overly abundant,” he said. “We had only about 24’ of clearance to work with. That may sound like plenty, but once you consider the fact that a 6’ tall person could be on a 6’ tall riser on top of a 3’ tall stage, it starts to become an issue.”

Vander Veen addressed this issue by building his midstage rigging upward, with two primary spans of truss supported the six fingers of his “claw.” These fingers were secured to the top cords of the primary spans and supported the R2 Washes, while pipe that spanned across the top of the fingers supported some profile fixtures.

“It took a pretty awesome team to make all this happen,” said Vander Veen. “There were more moving parts than meets the eye, so I have to give a shout-out to Brandon Jeffrey, Sabrina Seaman, Curtis Williams, Neal Ramesh, Elizabeth Patton, Logan Riskus, Emma Hughes and Josh Jansen. Just like a great show choir, we pulled together and created something beautiful.” 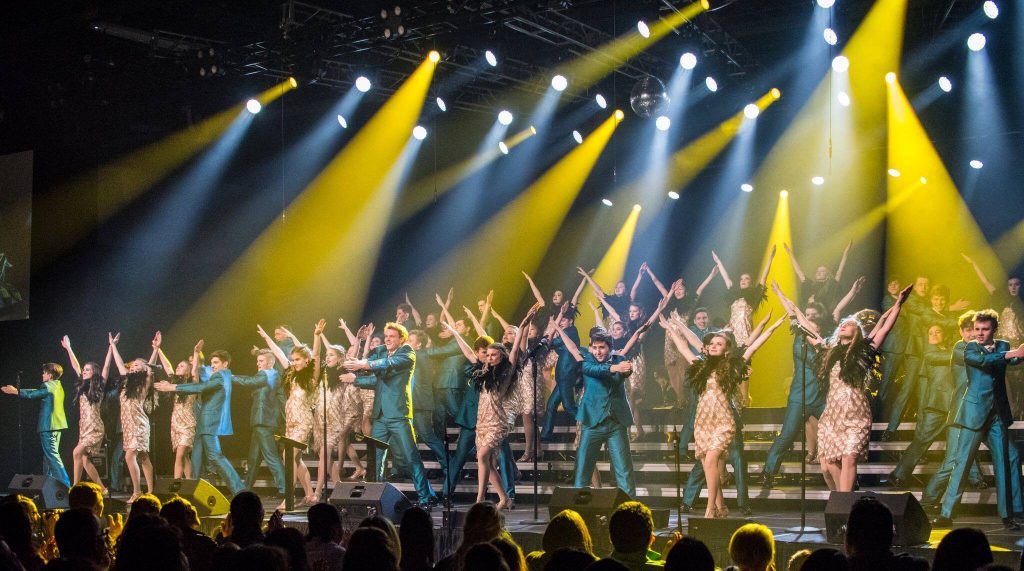