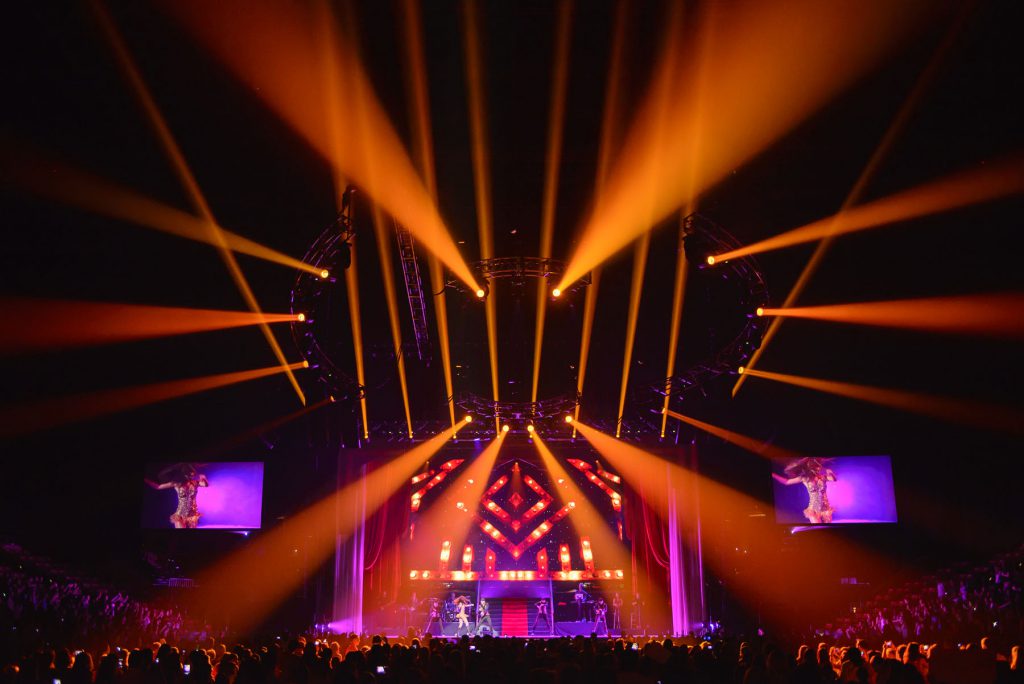 Time was when theatrical and concert tour lighting were like two sides of the same coin. Springing from the same source and guided by the same overriding principles, they nevertheless faced in opposite directions and seemed physically incapable of overlapping. In recent years, however, this coin has undergone a significant transformation, becoming malleable enough to bend, so that now theatrical and concert lighting not only overlap; they also exert a profound influence on one another.

Seth Jackson is very familiar with this convergence and the creative benefits it brings. Having achieved global success as a concert designer working for the likes of Toby Keith, Jason Mraz, Selena Gomez and Carrie Underwood, the Missouri-based LD has reignited his original interest in theatrical lighting. His recent theatrical work includes prominent projects like Manilow on Broadway at the St. James Theater in New York.

Jackson, who also teaches at Webster University’s Conservatory of Theatre Arts, spoke to us about his back and forth journey between theatrical and concert lighting design – and shared insights into how (and why) those two worlds are drawing closer together all the time.

Can you give us a little background into how you got started with theatrical lighting? At what point in your career did you start?
“Actually, theater was first before I ever got started in concert lighting. I had always been hooked on concert lighting since seeing a Billy Joel at 16, but at the same time I also knew enough to appreciate what I didn’t know — which was pretty much everything! So, I went to Webster University to get the kind of hands on training I knew I would need to crack into the lighting business. My Midwestern suburb upbringing didn’t give me a lot ways in into the industry. I was involved in theater in high school, but this involvement got much deeper at Webster.”

Ok, so then what was it about theatrical lighting that drew you to it?
“In addition to the technical training, it was very important to me understand lighting design. Lighting carries a lot of great power over an audience. It can be a destructive tool to the show if you don’t understand the psychology and history of what light does to people’s emotions. You can use any fixture to achieve the result; they don’t always have to bitmapped to work. I find all of this very much comes into play in theatrical lighting.” 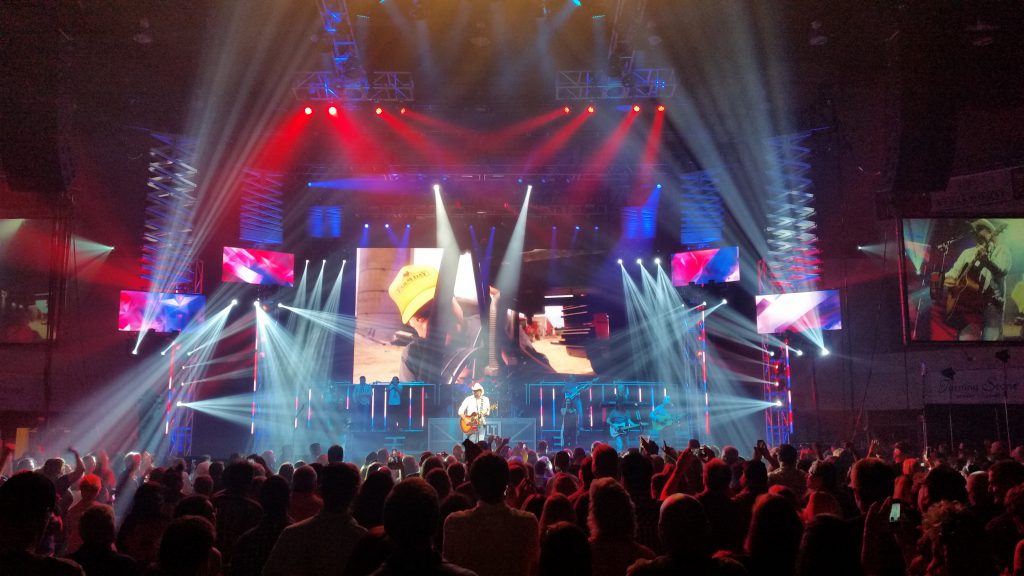 After college, you became very successful in the world of concert lighting. Did your experience in concert lighting help you when you started again with theatrical design?
“When I came back into theatre a few years ago, not only was I more experienced at lighting overall, but I had developed a style and method to my design process which added a great deal of speed and accuracy.”

So now that you’re doing both theatrical and entertainment, do you prepare differently for one type of project vs the other?
“I’m a big fan of working with creative, fun, people that create a work environment of equal participants who come up with something fantastic for an audience. That can happen in all sides of the business, whether it’s in a theatre or concert environment.”

Are you more likely to incorporate entertainment fixtures into your theatrical designs because of your experience?
“Absolutely my experience influences me, but it’s also the way of the industry these days. Moving lights and haze have been ubiquitous in a good majority of musicals for a decade. My advice regarding entertainment fixtures in theatre is to consider what you need it to do for your show, and then find the product that works best and stays on budget. This is true of all lighting projects.”

When you went back to doing theatrical work after success on the concert touring circuit did your background in entertainment hurt or help your credibility with potential clients?
“I think it was my own psyche more than a reality. The first couple of shows I did I was convinced that people were thinking, ‘he is just some rock-n-roll guy who doesn’t know anything.’ I think that was more in my head. Most of the designers I know today have some involvement in areas of production outside their main interest. I think we are all merging.” 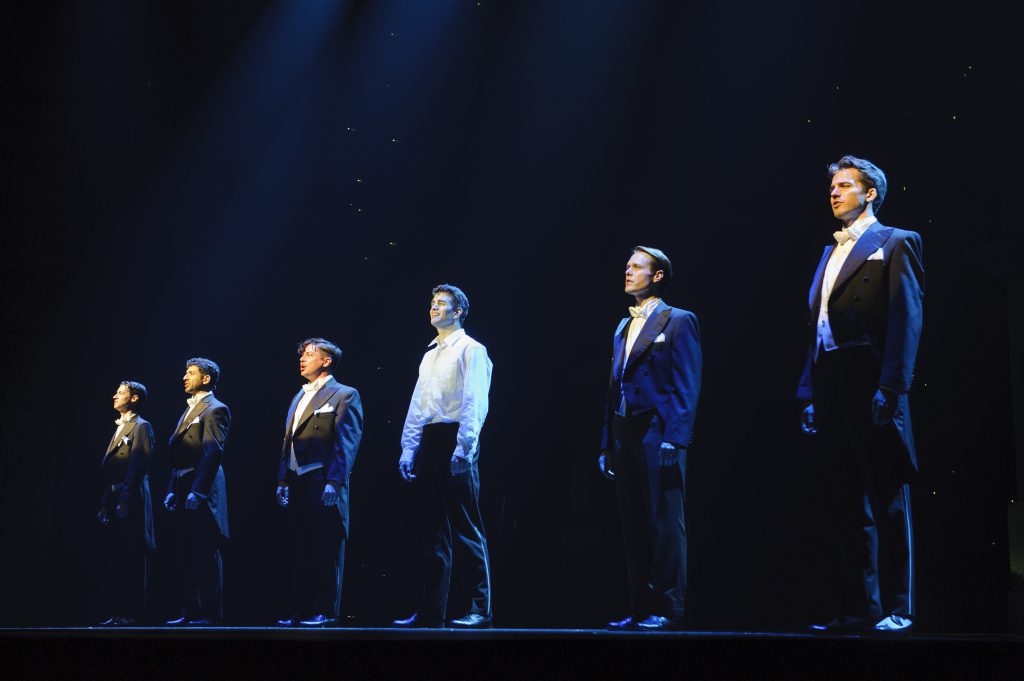 We know you teach lighting. Do you get students who aspire to both entertainment and theatrical lighting careers? If so, is there a difference in the personality types that are drawn to one or the other?
“Webster University, the Conservatory is an immersive place. You have every opportunity to study and grow in any area you want. We always tell the students you can make as much of this experience. You can achieve and grow, or you do the basics and miss a lot. That is the real personality difference I see: some students really want to grow and some just want to get by. Be it theater, entertainment, or even theme parks, if you the spark, you will eventually find something that clicks for you.”

Do you use different design tools when working theatrical projects than you do entertainment projects?
“No, my process is pretty consistent. I draft, but I have an assistant who is these days often a student who does that with me, I study the material, I meet with the team, and then I create a show.”

In theatrical projects you have to deal with a director. Is this an adjustment coming from the concert lighting world?
“Often times it is much easier. In touring, the role of ‘director’ is often filled by someone who is also the star. That can be difficult since the director is producing the overall vision of the show, but still has to then get up there and work the performer side.”

Technology has impacted both entertainment and theatrical lighting. How do these two worlds compare in terms of their willingness to accept new technology?
“I think there is a recognition that things need to be more precise in the theatrical world, and in the television world to be an effective product. Fan noise, the accuracy of the LED color systems, dimming curves and so forth. The more that technology develops it becomes much more open to be used.”

Do you remember your first theatrical project? Is there anything about that project that you would do differently knowing what you know now?
“Well, my first project was my high school play and I had Par38 lamps on track lights with glass roundels for the four colors you could choose from. I also remember the patch bay being something of a death trap. I would hope it would be very different now! I would also like to hunt down that theatrical consultant.”