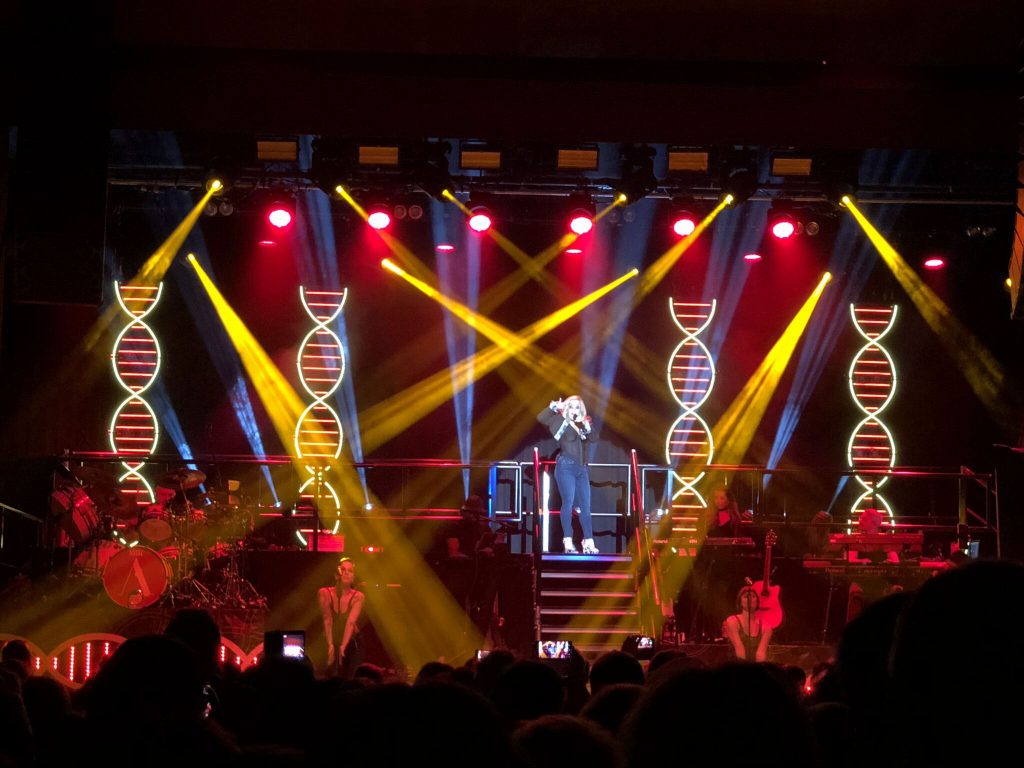 Seeing Simon Horn’s work on Anastacia’s Evolution Tour this summer, we were struck by the alluring backdrop he created for his multi-platinum client. Running across the back of the center stage, his scenic creation consisted of four DNA-shaped double helix set pieces flanked in pixel mapped LED tape with cell blinders attached to their backs. The structure with its “genetic imagery” did more than reflect the evolution theme of the European tour, it also added a sense of depth to the stage, endowing it with an arena-like vibe even at smaller venues.

Impressed with his creation, we talked to Horn about how scenic backdrops can be used to enhance lighting designs. Speaking to us from the office of his company Purple Light in West Sussex, the 2018 Knights of Illumination finalist described how, when worked properly, backdrops can serve both practical and creative needs, allowing a designer to conjure up immersive looks without incurring the expense of big fixtures or video panels.

In Horn’s view, the development of pixel mappable LED tape and strip fixtures has opened new possibilities for designers to create unique backdrops without breaking their budgets. As his work for Anastacia clearly demonstrated, he is one designer who is ready to make the most of this opportunity. 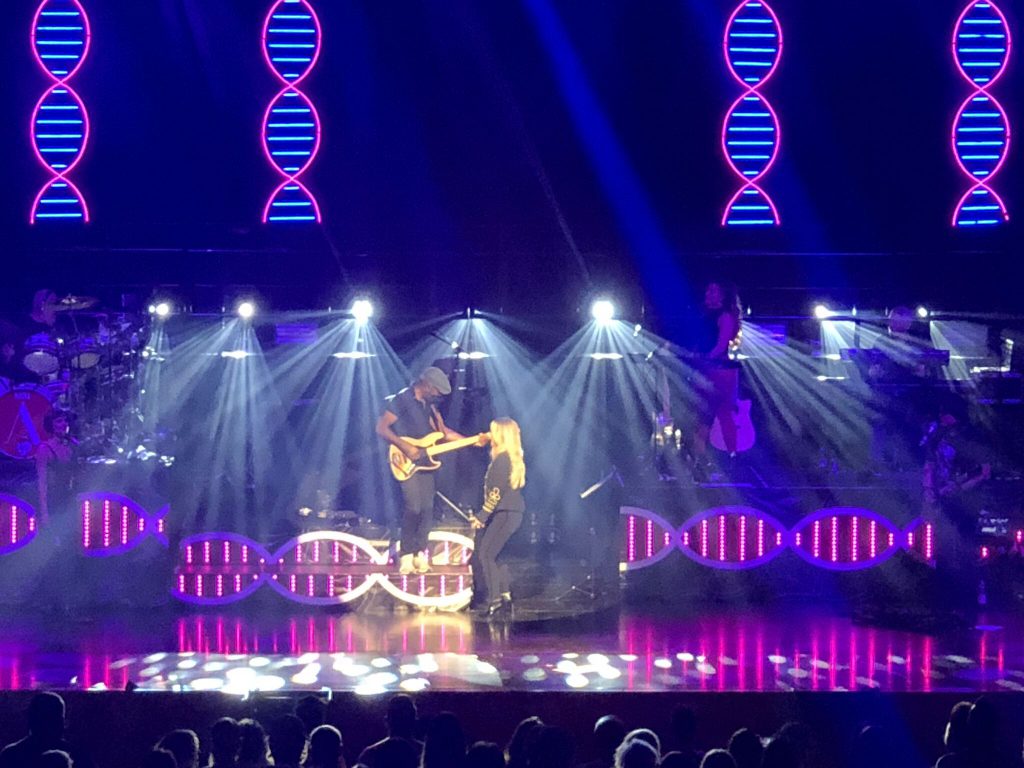 As we all know, shows are more likely to be videoed, photographed and shared on social media now. Has this made scenic backgrounds more important?
“Yes, this has very much been something on my mind when creating both lighting designs and scenic pieces. I want to deliver an eye-catching experience with a consistent identity so that regardless of the published content or how well the artist is in shot, it is instantly recognizable as that brand or act.”

For Anastacia, you created a DNA shaped background in light to reflect the artwork on her album. You didn’t use video panels. What are your thoughts regarding video vs. light fixtures when creating a scenic background? Are there times when you’d prefer to use one over the other?
“I believe more often than not video panels and content are used just for the sake of it. Video hardware and custom content is expensive, and I am a firm believer that when you do something you do it properly, as such to deliver good video to the standard I want would be very costly.

“So, most of the time bringing video in on a small budget pulls a huge chunk of money away from the basics such as lighting and set, as a result you end up with average lighting and average video. I work on getting the lighting perfected and then start adding video as a bonus. So, in most instances it is always my preference to focus on lighting first. But it all depends on the act really.

“In terms of of the DNA pieces for Anastacia, they were a very economical way of delivering a big identity look while granting a canvas in the background to do some cool eye candy effects. Anastacia even commented that in some respects it did look like a video screen when I mapped effects across the whole set.”

In the case of Anastacia, it seems like your background added a sense of depth to the stage. Is this something that you look for a scenic background to do?
“Yes, at the end of the day there was a dark hole to fill, I wanted identity but also an element of enhancing the layers of the whole design. These pieces removed the disconnected look between the floor lights and the overhead rig, so a fairly small set became quite a massive look.” 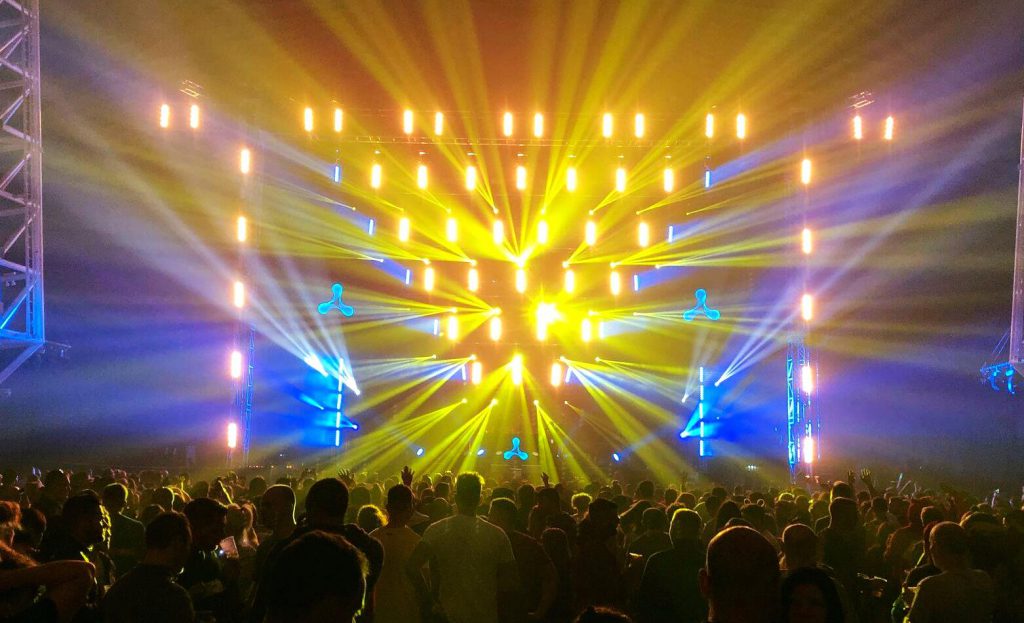 How do you create a compelling scenic background without having it be distractive?
“It is all about contrast and colour match / balancing. I needed the light output of the pieces to shine through without over powering anything but still have their place as eye candy. Diligent programming is key keeping it subtle for the more inclusive ballad moments at reduced intensity and then making things pop brightly during big hit accents. For Anastacia, moving on to the summer festival runs working with different rigs I employed an intensity master on the console that could control the brightness from 0-200% so during the show I would ride that fader to make the DNA pieces brighter or dimmer where needed regardless of what effect or state they were programmed to create.”

One of the things we admired about your work is even though your scenic backgrounds are compelling, they’re also simple. Is it important to limit your objectives when designing a scenic background?
“This goes back to not biting off more than the budget can chew! If you know your limits and the imagery you wanted to achieve, then choose a simple but punchy and effective solution. LED tape is absolutely fantastic for this, it’s cheap and simple but when executed well gives so much.”

Tours often stop at a wide variety of venues. Is it important that a scenic background be flexible, so it can be adjusted for different stages?
“Oh yes, completely. I have to deal with situations where we can’t hang from a house rig and have to ground stack; low roof stages were also an issue. I also had shows where we travel by plane with an artist that is really keen on keeping that identity. So, in the case of Anastacia, I designed the towers to split into 4 modules each that can either be hung or floor mounted along with being a sensible size to put in the checked baggage.”

A lot of designers seem to be incorporating moving fixtures into their scenic backgrounds, so the lights are used for things like backwashing and aerial effects in addition to serving as scenic pieces. What are your thoughts on that?
“It all comes back to contrast, executed well and beautiful landscapes can be achieved as well as immersive beam looks pulling people’s attention to that set piece, but it is important to manage this well and remember people have come to see the artist on stage, and as a lighting designer we are there really to add drama as well as enhance the space around them, but not over power the artist’s hold on the audience.”

Are scenic backgrounds part of most of your designs today?
“This is something I have gotten into in the last 4 years, pixel mappable LED tape and the drivers have come a long way and have opened up a very cheap repository of product to create big impressive components for a show; this is something I intend to expend on and be remembered for!” 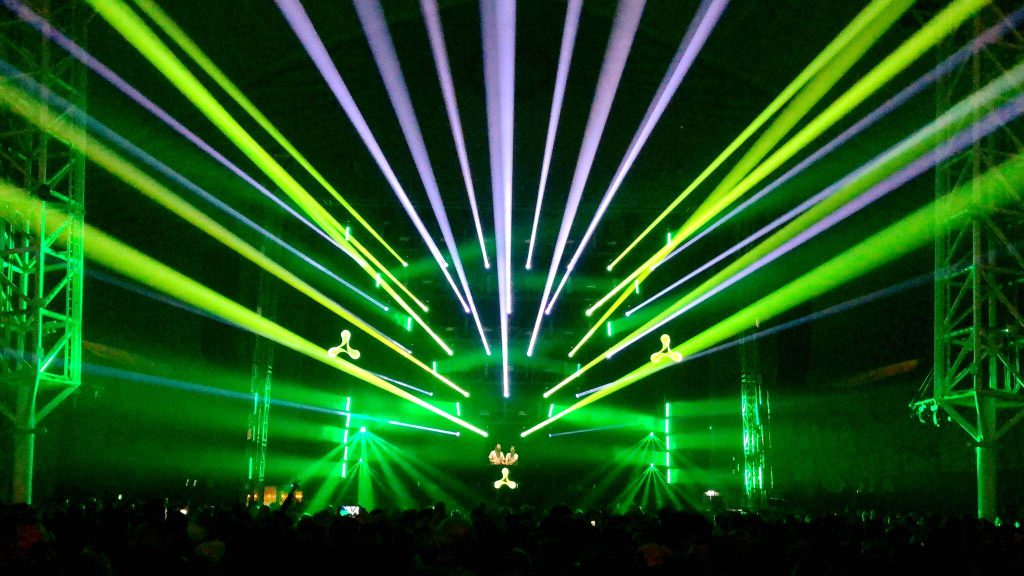