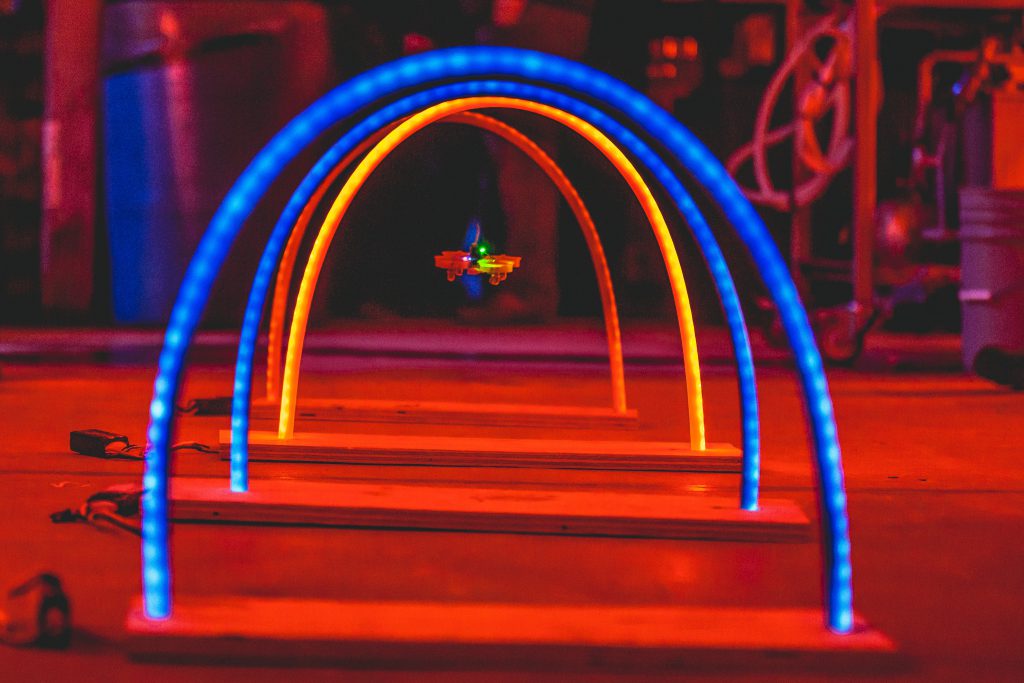 WILLIAMSBURG, MA – S. Jeremy Peters loves piloting small FPV drones. There is, he says, “no rush quite like it.” He and his wife Alison Peters wanted to share their passion for drone flying with a wider audience. As owners of SJP Productions, a lighting and projection company experienced working festivals, they were in an excellent position to do so. Hooking up with a local brewery, they created one of the first spectator-oriented drone racing events, complete with festival-like lighting, atmospherics and live video feeds all controlled with a three universe set up built around ChamSys Software.

“Typically drone races are geared toward the racers themselves without a lot of spectators,” said Peters. “Generally, they don’t have much production. Alison and I wanted to draw on our production experience at festivals like Lockn, Peach, Bisco, Mountain Jam, Taste of Country and Gathering of the Vibes to create an event that engaged spectators, so we could draw newcomers to drone racing. When we approached Brewmasters Brewing Services, they were all over the idea. So four weeks later, we held our drone race/festival at a working brewery. It was a blast!”

Brewmasters Drone Night kicked off at 6:00pm on March 25th.  It was quickly apparent that this would be no ordinary drone race. Peters got things going in high gear with 150 lights and cryo jets at the start gate. Live video feeds from the racers’ goggles and eight camera live switchers trackside put spectators in the middle of the action. ChamSys MagicQ PC software controlled lighting and video using a PC Wing and multiple Playback Wings. Video was triggered via ArtNet using MagicQ. 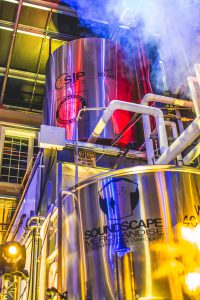 A collection of moving fixtures, including CHAUVET Professional Rogue R2 Beams and R2 Spots along with live music enhanced the festival atmosphere. Pixel mapped LED bars were used to line the building’s stairwell, creating a magical aura. Human “LED hula hoopers” served as obstacles during the race. IP65 rated par-style fixtures were located throughout the course to add color.

The IP65 rating was critical, according to Peters, given the amount of liquid floating around the brewery. “There is a great deal of liquid at the venue due to the brewing and cleaning process,” he said. “Its floor slopes to a long drain, and the tanks are constantly letting off small amounts of liquid and gas. Ingredients are also being mixed which end up on the floor, and the floor has to be very regularly hosed off — especially before having visitors for the event. During the setup, the brewery also pressure washed all their tanks so they were looking spiffy for our guests, which dumped a lot of water on the ground, and on the par fixtures.”

Programming the various visuals of this multi-faceted event was relatively simple, thanks to MagicQ’s user-friendly features. “In general, programming on MagicQ is a breeze,” said Peters.  “Once you know how to program, you can do anything. Pixel mapping on MagicQ is very straightforward, and we use this feature a lot. On this particular show, the LED bars are 36 channels each. We were able to create the pixel mapping effects for them in under a minute.”

“Also, ChamSys pairs very easily with video, which was obviously very important in this project,” continued Peters. “ChamSys works with our video software by treating MagicQ as an intelligent DMX MIDI-style controller, patching faders to opacity control on video layers for camera feeds, so they could easily be controlled from a single interface.”

MagicQ allowed Peters to achieve tight control over his lighting rig. This was especially important given the nature of this event. “Balancing the crazy lighting we had with the racers’ ability to see in FPV, which is very sensitive to light changes, was a big challenge,” said Peters. “The cameras for FPV flying don’t white balance very well, so it’s difficult for them to respond quickly to bright to dark transitions. This can make it hard at least momentarily for the racers to navigate. We minimized this as much as possible in programming scenes to help the racers overcome this challenge.”

In addition to the experienced racers who navigated this course with its varied lighting, Brewmasters Drone Night offered novices the chance to experience drone piloting for the first time. “Newcomers loved the experience,” said Peters. “I’m sure we introduced a lot of people to the hobby. We plan to put on more events like this, and are currently working out the details for us to do smaller drone events with the Boys and Girls Club as well as a local school, focusing on technology and skill training. Who knows, maybe one day drone racing will be the next NASCAR!” 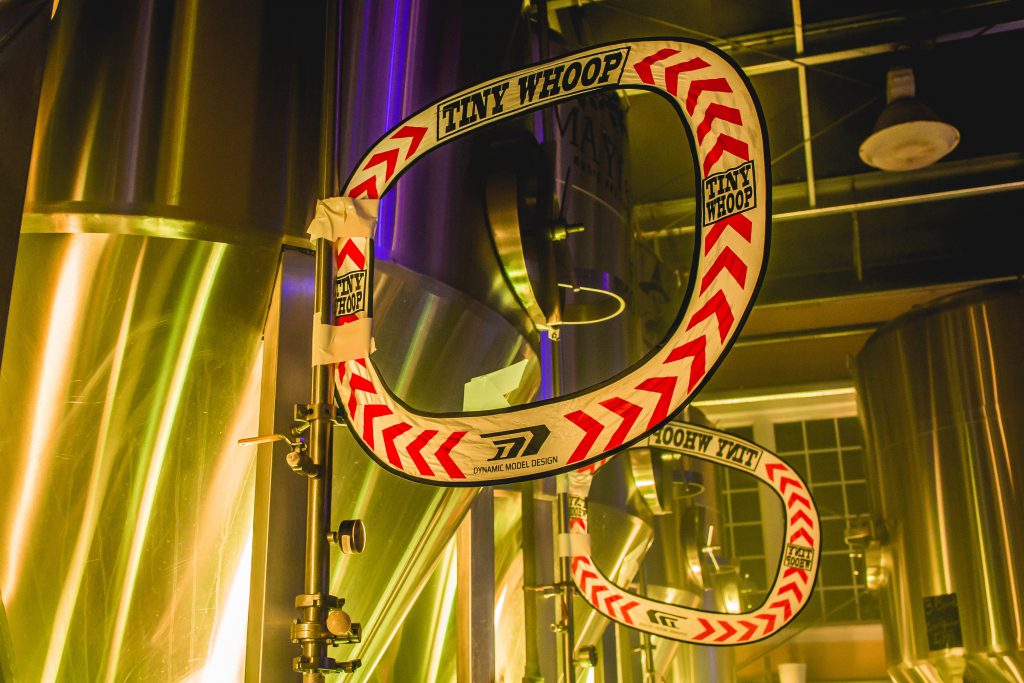