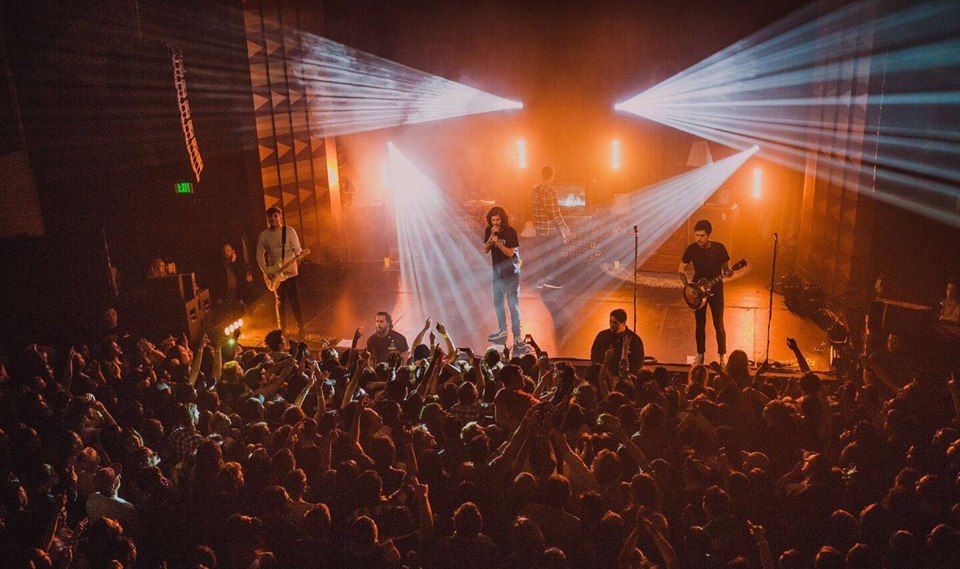 CHICAGO – At a time when some bands are using exotic, abstract and hard to decipher scenic elements on stage, pop punk phenoms Real Friends are taking an entirely different approach. Touring the USA, Mexico and Australia in support of their second studio album The Home Inside My Head, the Chicago based quintet is performing in front of a downright homey set, complete with a family room couch, Afghan blankets and lamps that look like they popped out of mid-century America.

This set is meant to convey the honest connection that Real Friends has with their fans, rather than nostalgia or drowsy comfort. Although there are some gentle acoustic tunes in the tour’s set list, most of the time the band kicks things into raw punk gear with hard driving songs like “Mess” and the staccato “Empty Picture Frames.” Supporting the gentle set and the edgy music is a flexible Steve Kosiba designed lightshow that features CHAUVET Professional fixtures supplied by Squeek Lights. 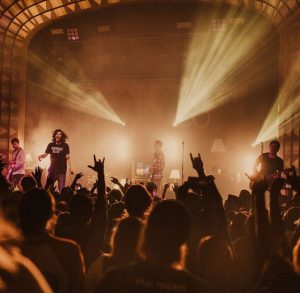 Kosiba’s rig performs a wide range of functions from backlighting and silhouetting the band during sing-a-longs, to warming the stage with side lighting, to creating aerial effects, to highlighting crowd surfers (a common sight at Real Friends concerts).  This versatility is particularly impressive, given the compactness of his rig, most of which is set up on four pipes with tees.

“We have two 4’ pipes and two 6’ pipes,” said Kosiba. “Rogue R1 Spots are positioned on top of each pipe and a pair of Nexus 4×1 bars are mounted on the front of each pipe. Then we have a pair of Nexus units that we use for side lighting. We also use a CHAUVET DJ DMX-4 Dimmer Pack to control the band’s table and floor lamps that are part of their set. The rig is kept compact for transport purposes, but we get a lot of output and a variety of looks from it. For a compact LED mover, the Rogue is incredibly punchy. Plus we can create a lot of stunning aerials with is prism — and we can shape its beams for variety.”

Also coming in for praise from Kosiba were the Nexus 4x1s in his rig. “The Nexus units give us some great moments silhouetting the band,” continued Kosiba. “They’re so much better than a regular halogen blinder, because they allow for colors and chases, yet they can still create a big warm white moment with them when necessary.” 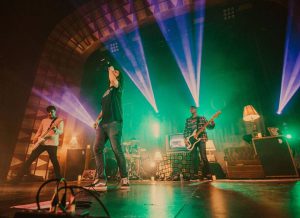 Another reason Kosiba kept his rig simple is that Real Friends is not carrying a lighting director for this tour. “Lighting is still fairly new to them, so they’re growing into it one step at a time,” he said. “They learned about us when they opened for Wonder Years. Now that they’re headlining their own tour, they want lighting.”

Before every show, the band and its techs set up the lights and hook the rig up to backing tracks. The show runs automatically with the backing tracks. A MIDI file plays out of Ableton Live on the band’s computer and sends MIDI notes to lighting software that was provided by Squeek Lights.

“This was the first time we triggered the cues for a show with MIDI notes from the band’s backing tracks,” said Kosiba. “It worked out well –there are Nexus hits that are perfectly in sync with the music because of it! Real Friends lead guitarist Dave Knox was instrumental in getting the backing tracks lined up so I could program with the MIDI notes. He’s also learned how to make changes in the lighting control software, so we can adjust to different venues.  He’s been great at lighting for having never done it before! Now that the group is experiencing firsthand how lighting creates atmosphere, I’m confident their involvement will grow.”