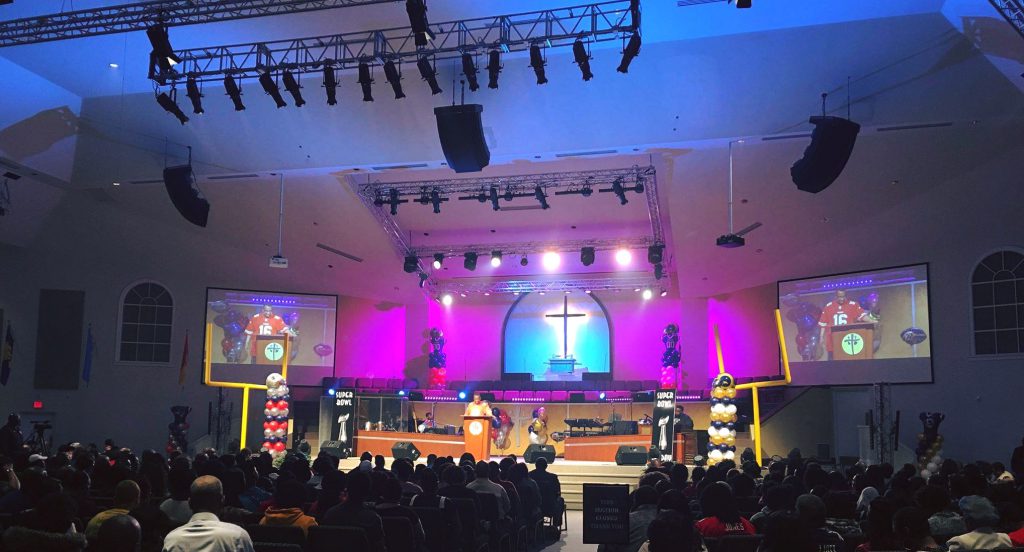 ATLANTA – On Sunday January 27, worshippers who follow live streamed services from the Tabernacle of Praise International noticed something remarkably different about the broadcast they were watching. The colors were more realistic, the shadows were gone, and the dark areas that always seemed to lurk off stage had disappeared, resulting in a program that had all of the energy and vibrancy of a live service.

Many people congratulated the church’s LD Brad Lyons and Director of AV David Patrick on the new lighting system. In actuality, though, the “overnight transformation” in this dynamic church’s broadcast lighting really began two years earlier, when Lyons had the 24 aging incandescent fixtures over the church’s stage replaced with 14 CHAUVET Professional Ovation E-190WW LED ellipsoidal units, supplied by dB Integrations.

“The new lighting system was really Phase Two of a step-by-step plan,” said Lyons. “Like many churches, we had to do a lot of AV upgrading in recent years, first to get to LED stage lighting, and then to create a true broadcast worthy system. This often requires churches to do a balancing act, weighing the cost of these upgrades with the other needs of their ministry. In our case, as in many other cases, the best way to achieve this balance is often with a phase-in approach.”

Like Phase One of the Tabernacle of Praise lighting upgrade, Phase Two was anchored by CHAUVET Professional Ovation fixtures. The new lighting is positioned on three truss structures: a 50’ long line of box truss located 30’ from the stage, flanked on either side by a 30’ section that is 20’ from the stage. Using a mix of new fixtures and LED units from the previous Phase 1 rig, Lyons is able to deliver a smooth, even field of warm white and richly colored light that recreates the feeling of a live service environment on broadcasts.

“Back in 2015, Phase 1 was done to transition the stage lighting from incandescent to LED and provide a solution that would enhance the worship experience with creative, concert-style lighting,” said Lyons. “The focus, at that time, was to address the primary need, which meant lighting for the stage. We planned the broadcast expansion for a later date.”

Although the new system resulted in vastly improved stage lighting (not to mention a more comfortable environment for choir members in the loft backstage), it still wasn’t up to Lyons and Patrick’s standards for broadcast applications.

“We got good looks on our live streams, but we wanted to do better,” he said. “The stage was well lit; however lighting on the floor and in the alter area had some inconsistencies. It also dropped off quickly to the sides. Around the sides of the stage the only lighting on the floor was from the in-ceiling house lights. On camera this lighting was virtually non-existent. As a broadcast ministry striving to re-create the experience for our online and television viewers, the inability to see what is going on due to lack of lighting was a real issue.”

To address this issue, Tabernacle of Praise used Trusst CT290-430S 9.84’ box truss to have the 50’ line of truss installed across the stage. Lyons installed 20 Ovation E-190WW ellipsoidal fixtures for front key lighting on this truss. Joining the ellipsoidal units on the center truss structure were three Ovation F-165WW Fresnel fixtures.

Additional Ovation F-165WW Fresnels were hung one apiece on the side truss structures to provide key lighting to the front corners of the stage for broadcasts. “The Ovation line of LED ellipsoidal and Fresnels give me amazing quality, versatility and punch,” said Lyons. “Plus, they’re very efficient. Due to their low power consumption, I can daisy-chain several fixtures over a single powerCON run for ease of installation and quality of appearance.”

In addition to the Ovation luminaires, the Tabernacle of Praise rig includes four Rogue R2 Spot fixtures and six Q-Wash 560Z movers (from the earlier rig) that are flown on the center and side truss structures and are used to focus on different band members, as well as to create special concert looks on the walls and ceiling. The Q-Wash fixtures serve added duty, being turned around toward the congregation to provide additional fill lighting for broadcasts.

Rounding out the rig are six COLORado 1-Tri Tour units, as well as CHAUVET DJ SlimPAR QUAD 12 IRC and SlimPAR Tri 12 IRC units for colorizing the stage — plus six Intimidator Spot 355Z IRC moving fixtures positioned three apiece on the side truss structures for side lighting and specials.

The key to making the new system work, according to Lyons, is the seamless integration of all facets involved in the design. “Our church is fortunate that we not only have a team of guys who are professionals in the AV world, but also that our pastor T.J. McBride and First Lady Shunnae McBride have a solid appreciation of technology,” he said. “Working together we discussed our needs and the solution to them in-house. I then drew everything up in WYSIWYG and submitted that to dB Integrations.”

According to Lyons, the tech-savvy Tabernacle of Praise team isn’t resting on its laurels. They already have plans for Phase 3, which will see the addition of more ellipsoidal fixtures to create an even more harmonious balance between live and broadcast lighting.