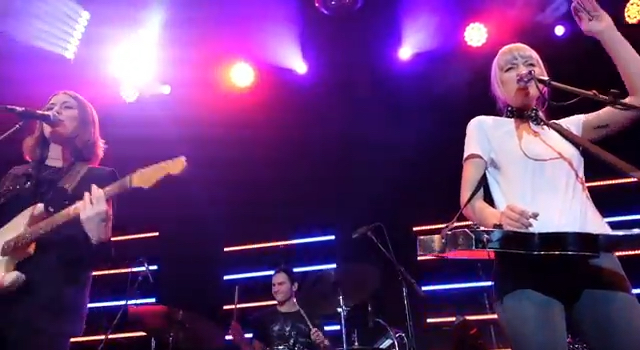 NEW YORK – Last year, Tony Caporale was working the boards for his client Keith Urban’s New Year’s Eve Show in Nashville. Sitting in the FOH booth with his wife Jessica Caporale, he wasn’t expecting anything in particular when opening act Larkin Poe took the stage.

However, all that changed in the flash of a growling guitar riff! Listening to the fiercely intense performance of sisters Rebecca and Megan Lovell, Caporale turned to his wife and said, “I’d like to work for them.” This November, he got his wish, as the Atlanta-based duo, who have been described as the “little sisters of the Allman Brothers,” kicked off their global Venom and Faith Tour supported by his lighting design.

“The look of this show isn’t a typical one,” said Caporale. “When the band, management, and I got together, we all agreed that we wanted this show to be heavily saturated and moody. We didn’t want to take the approach, ‘Here are two pretty girls, so let’s have everyone look at them in bright key light all show long.’ Rather, we have two fierce rockers up there on stage ready to melt your face! If you listen to the music, you’ll know presenting them this way makes absolute sense and totally fits their vibe. Rolling out the Épix on selected shows accentuates this feeling.”

Not surprisingly, Caporale keeps a tight lid on colors throughout his lightshow, often illuminating the stage in white or monochromatic hues. The rows of tubular Épix units, with their diffused light (the result of filters placed on them), cast an edgy glow on the two stars and evoke an old-school industrial mood.

Arranged in five rows of six units each, the Épix Strip Tour fixtures formed an inverted V formation on the Bowery Ballroom stage. This resembled the band’s new neon logo, while also adding depth and texture to Caporale’s lighting design.

“I wanted the Épix to serve as a hardcore rock-and-roll background for the girls that could do a lot of lifting for the show,” said Caporale. “Not only do the strips give off a neon look, they also add energy to the stage as a result of the intricate pixel mapping we do to match the beats of the songs.

“The pixel capabilities were crucial to us,” continued Caporale. “The Épix Strip had the most versatility pixel-wise of all the linear products I saw. I could get 50 instances out of these rather than 40 or less I saw in other models, so I was sold.”

At the same time that he created this sense of movement with this pixel mapping, Caporale also relied on the diffused light from the strips to reflect the mood of the band’s music at the Bowery Ballroom. “Mood is really at the heart of this group,” he said. “When I first saw Larkin Poe, I knew I wanted to light for them because of the intense reaction they evoked. Now I hope that the lighting we’re creating is bringing that mood out even more.”