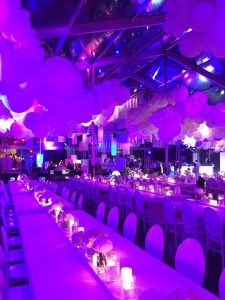 STELLENBOSCH, SOUTH AFRICA – It has often been said in different times and in different languages that great art takes nature as its model. At few places is this as evident as it is in South Africa’s Dylan Lewis Sculpture Garden. Situated on the slope of Stellenbosch Mountain, a short drive from Cape Town, the expansive garden, with its winding paths, natural fauna and stunning vistas, serves as an inspirational setting for 60 works by internationally acclaimed South African sculpture Dylan Lewis. Done in bronze and woven into the park grounds, the sculptures summon the power and ancient rhythms of Africa’s land and life forms, bringing all who view them closer to nature.

This spirit was beautifully reflected at a prominent wedding recently held at the Dylan Lewis Sculpture Garden, thanks in large measure to the event’s well-balanced, harmonious design and a skillfully deployed lighting rig by Jean-Pierre Wilson of Unfazed Productions that featured CHAUVET Professional Rogue R2 Wash fixtures and CHAUVET DJ par units used as truss warmers. 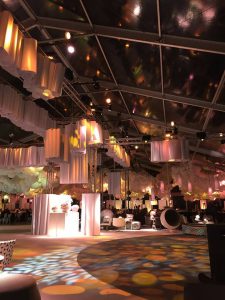 Coordinated by Anne Mann Celebrates and designed by Chris van Niekerk, the wedding took place in a spacious tent-like metal frame structure on the garden grounds. The transparent material used on the roof and sides of this structure engendered a connection between those celebrating the wedding and their natural surroundings.

Wilson, who was retained by SMD Technical for truss and lighting design, was able to accent the wedding’s festivities without taking away from its natural feeling. Using 240 meters of truss, he built an overhead bar running the length of the structure, as well as crossing bars running its width, to hold lighting fixtures, soft fabrics and balloons. He also created a circular structure for accent lighting positions, and arranged truss towers around the dining area to hold lighting fixtures that were used for washing. 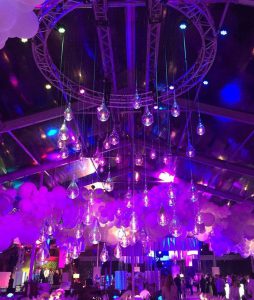 “There was a balance in lighting this wedding,” said Wilson. “We wanted to accent the interior and create some extra excitement for the festivities, but at the same time we didn’t want to diminish the connection between the wedding and its natural surroundings. The Chauvet fixtures helped us do this, thanks to their color rendering capabilities and their focus.”

During much of the wedding, Wilson used his fixtures to produce soft ambers, golds and lavenders to complement the surrounding landscape. At a few key moments, however, he went with bolder colors to add extra excitement. He also relied on gobos projected onto the dancefloor to create a sense of depth.

Wilson singled out the RGBW Rogue R2 Wash with its five zones of LED control for its color rendering capabilities. “The color mixing was very smooth with these fixtures,” he said. “We were able to get very subtle gradients of color, which helped support the elegant balance between art and nature that characterizes this site and characterized this wedding as well.”