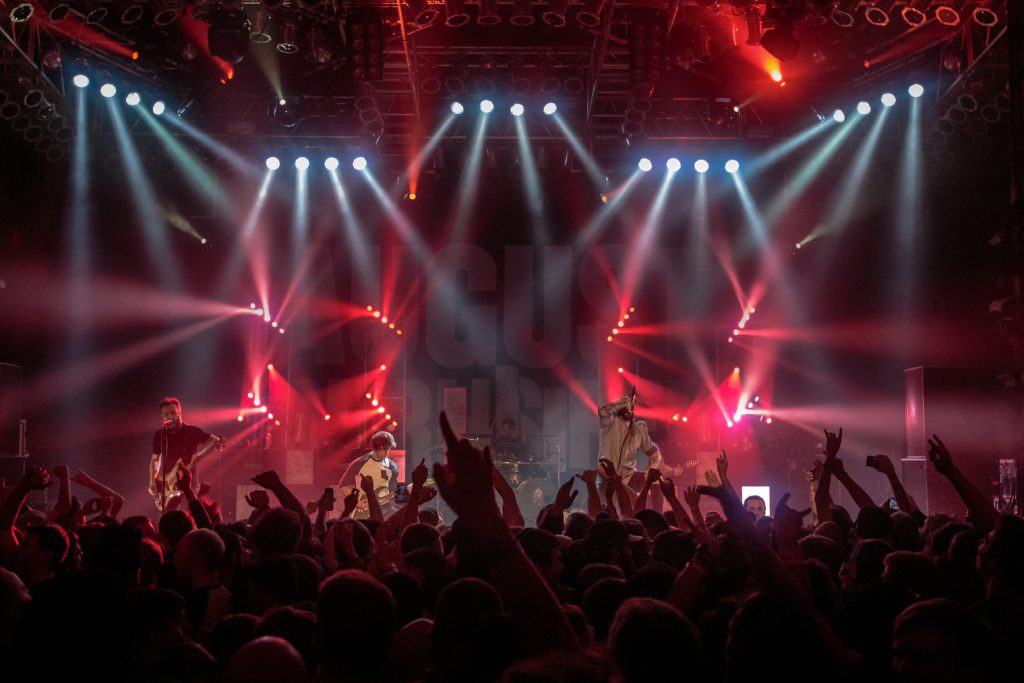 NEW YORK – In 2007, August Burns Red blazed a new path when they put a new twist on the metalcore sound.  A decade later, the Grammy-nominated quintet marked this milestone by kicking off 2017 with a celebratory coast-to-coast “Messengers 10-Year Anniversary” tour. The group plays its bold upfront Messengers album front to back on this tour, treating its audience to an unbroken succession of musical peaks.

Creating a nonrepeating variety of exciting looks for this tidal wave of sound without being over the top presented a challenge to lighting designer Victor Zeiser of Squeek Lights. It was one he is meeting quite beautifully with help from a collection of Rogue R1 FX-B and Rogue R1 Spot fixtures from CHAUVET Professional.

“In my view, every single note doesn’t need a cue to go with it, even in metal music,” said Zeiser.  “So for this tour, I set out to create a show that captured the energy of the music, without being visually overwhelming and exhausting to the audience. At the end of the show I want the crowd to be exhausted from moshing too hard, not from being blinded by strobes for 75 minutes.” 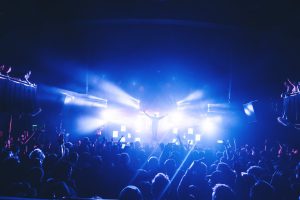 The Rogue FX-B fixtures in his rig were critical to achieving a rich variety of looks, according to Zeiser. “They were a tool I could use to create a bunch of different looks that are all exciting and really capitalize on the evocative moments in August Burns Red songs, without being trashy,” he said. “Our show is really based around the unique looks that I can only get out of the FX-B fixtures.

When you’re able to hang eight compact fixtures and get 40 beams of light to fill your entire space, it’s really an amazing thing.”

Zeiser complemented his eight Rogue R1 FX-Bs with an equal number of Rogue R1 Spots. “The two fixtures play very nice together,” he said. “The R1s create a nice layer of light for the FX-Bs to pop though with their multi-faceted looks. Together they create a very full and powerful impression. Gobos from the R1s play off nicely against the beams of the FX-B. We also create some great moody moments during the show with just the Spots on.”

The Rogue R1 FX-B and Rogue R1 Spot fixtures are both arranged on a custom-designed aluminum ladder system.  A pair of FX-Bs are mounted on each of four ladder structures. A single R1 Spot is positioned between them, and a blinder is located at the bottom of the ladder. Each ladder has adjustable cross bars, making it easier for Zeiser to space the fixtures exactly to his specifications and maximize the number of looks he is able to create.

“Steve Kosiba of our Squeek Lights team dreamed up this aluminum ladder system with custom bases,” said Zeiser. “We’re using this setup on the entire tour. Each base is 65 pounds with the case handles, which is very manageable.  I have had many stage hands go for those instead of moving a normal pipe base, even when these are 10 pounds heavier. For transporting from venue to venue, I jam about half of the cases into our bus trailer; then half of the gear rides with our opening act Protest the Hero, which we’re also lighting.”

Working his different Rogue fixtures in coordination, Zeiser is able to achieve the range of looks he wanted to create for the richly textured music of August Burns Red. A case in point is when the main set ends with “Redemption,” the last song on the Messengers album. “I think this is a really special moment in the show,” he said.  We end in this great big beautiful amber look from the Rogues, which is tasteful, but feels really powerful.” 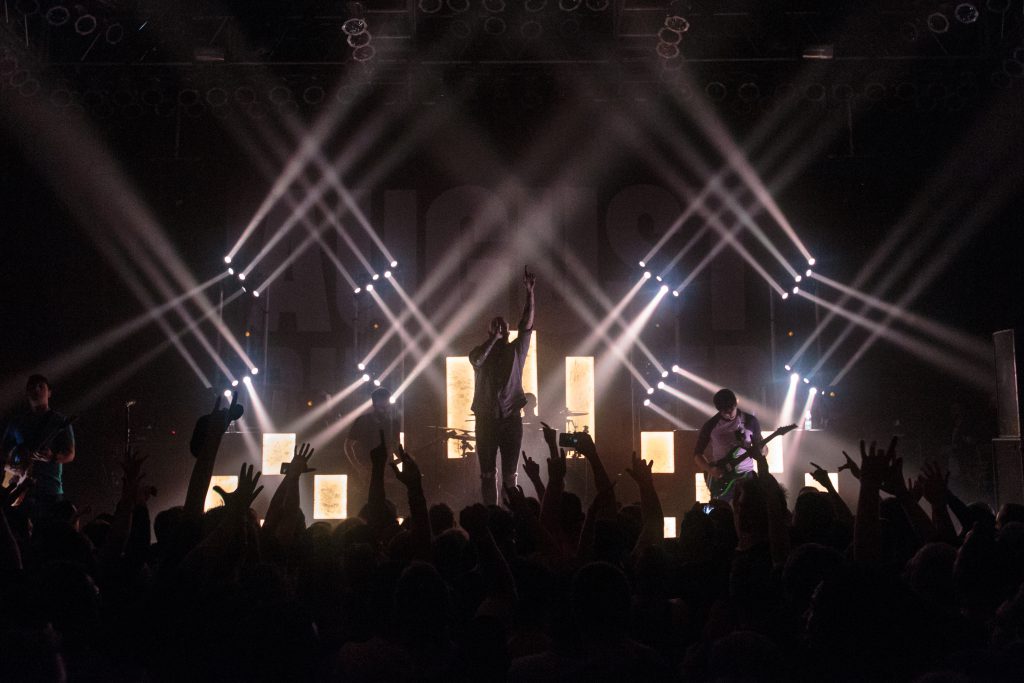 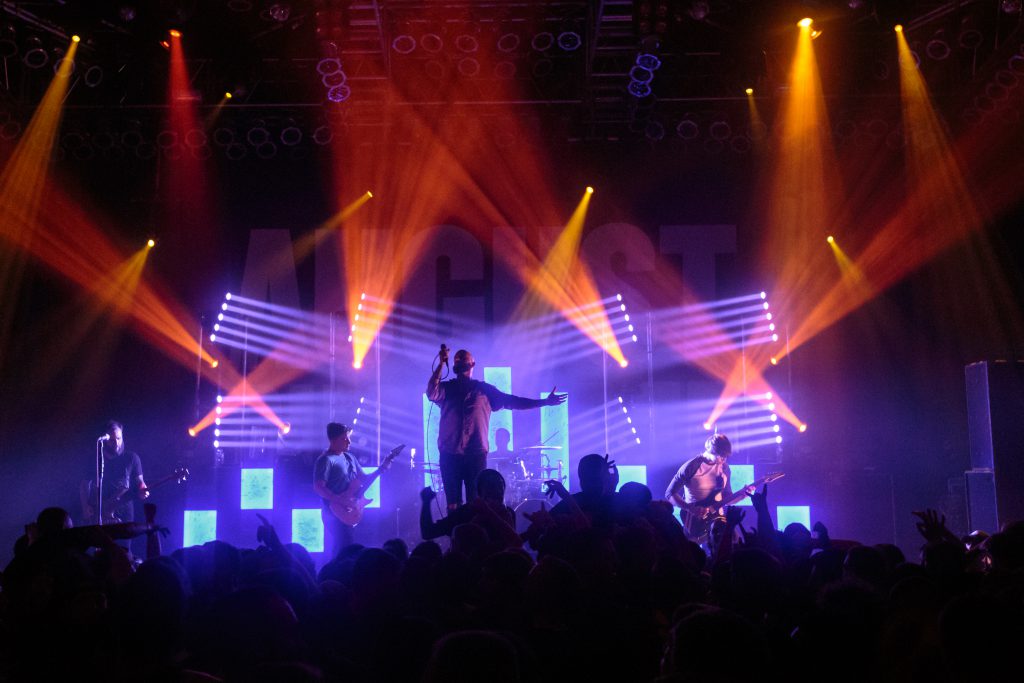 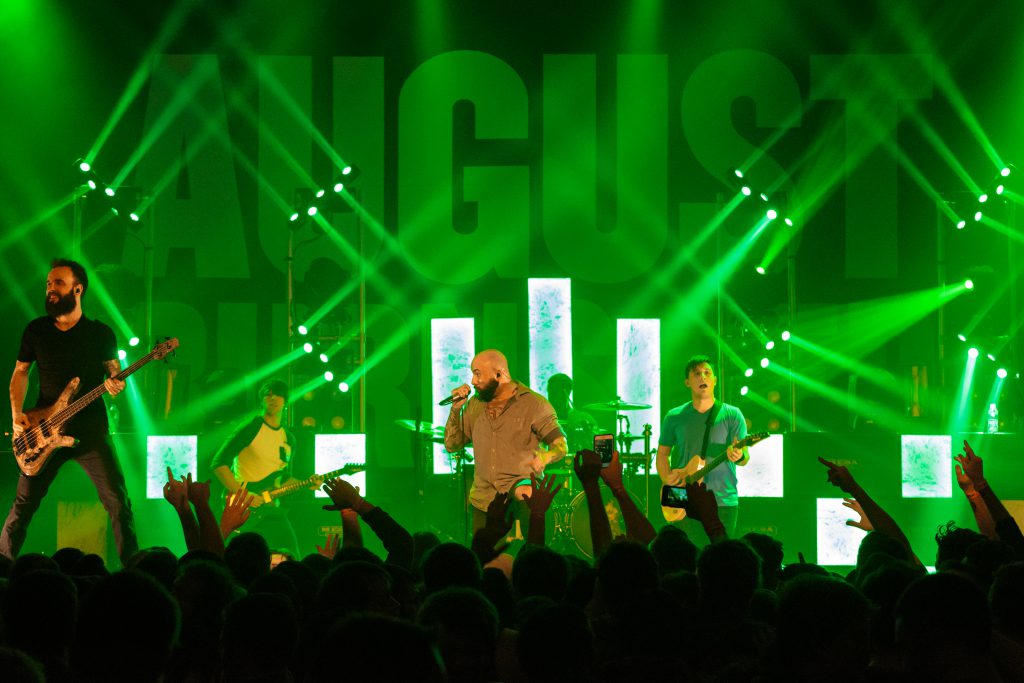 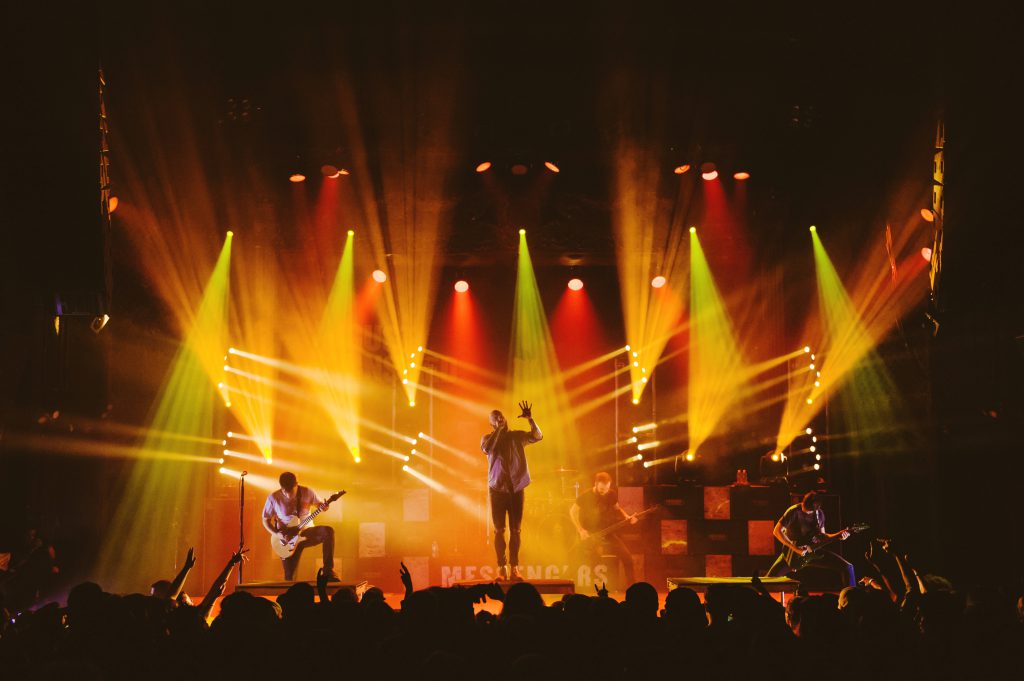 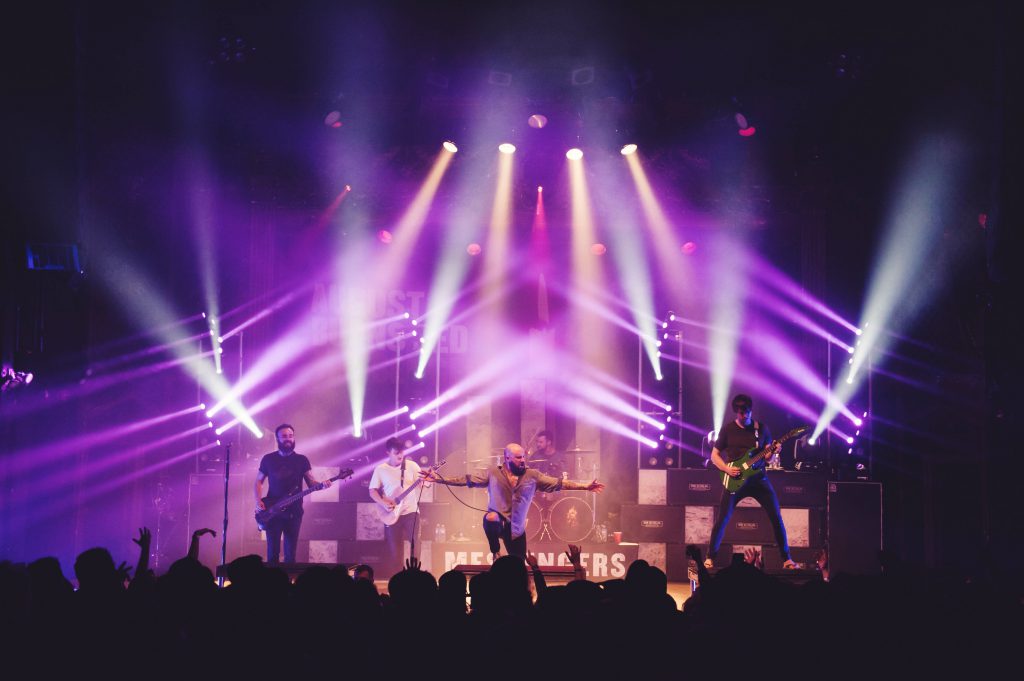 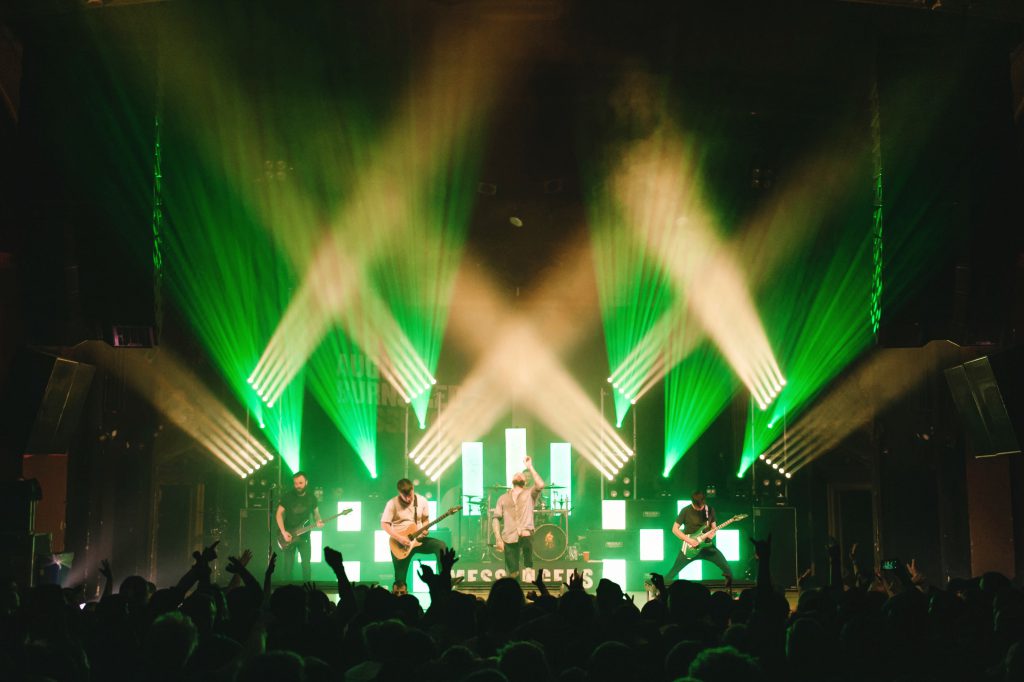 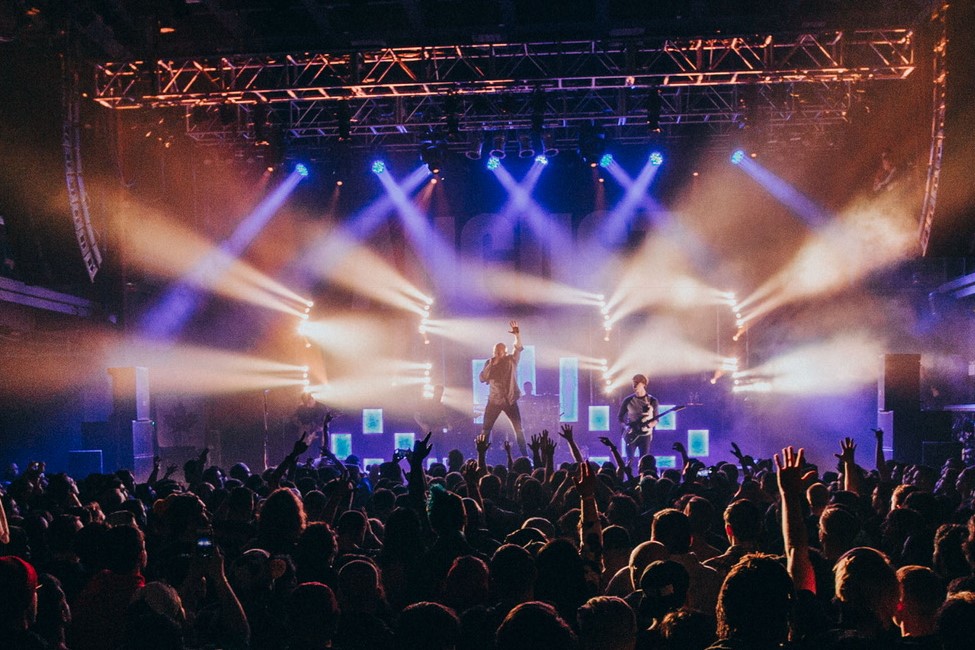