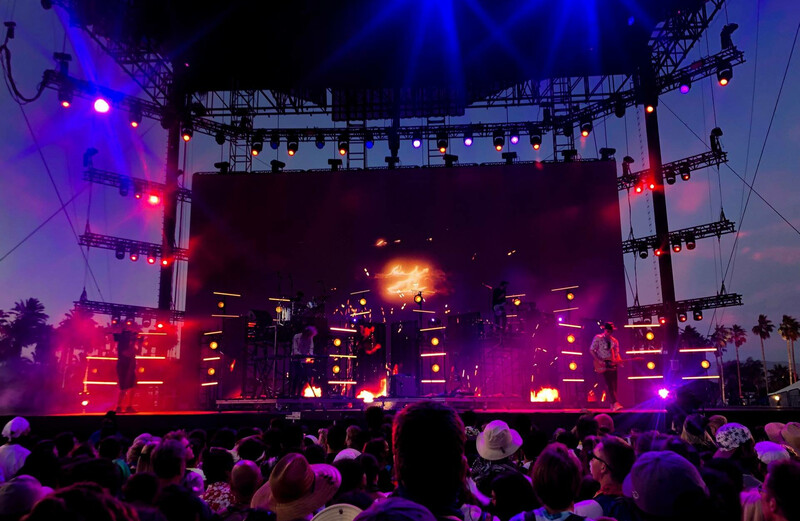 A lighting design, particularly one done for an outdoor festival never takes place in a vacuum. Enveloping the stage, and extending far beyond its reach are its surroundings. They may be rural or urban, aesthetically beautiful or unnervingly jarring. They may even be nothing more than wide open space and sky. One thing is certain though, these surroundings should never be ignored.

Will Chandler recognizes this, which is why he pays careful attention to the expanse of space beyond the stage when creating his outdoor designs. Channeling your surroundings and weaving their visuals into your design not only endows your show with a greater sense of balance, believes Chandler, it also expands your reach, making the visual panorama you create larger and more meaningful to people who may be sitting far from the stage on the festival grounds.

The wisdom of this design philosophy was made beautifully clear to us when we saw Chandler’s stunning design for Bob Moses at last year’s Coachella Festival. Leaving his “blow through” rig deliberately open, he created magical moments by playing off his
warm white and delicately colored light against the sun as it set behind the San Jacinto Mountains.

Impressed with transcendent blend of design and nature, we caught up with Chandler to talk about the harmony of light and place. 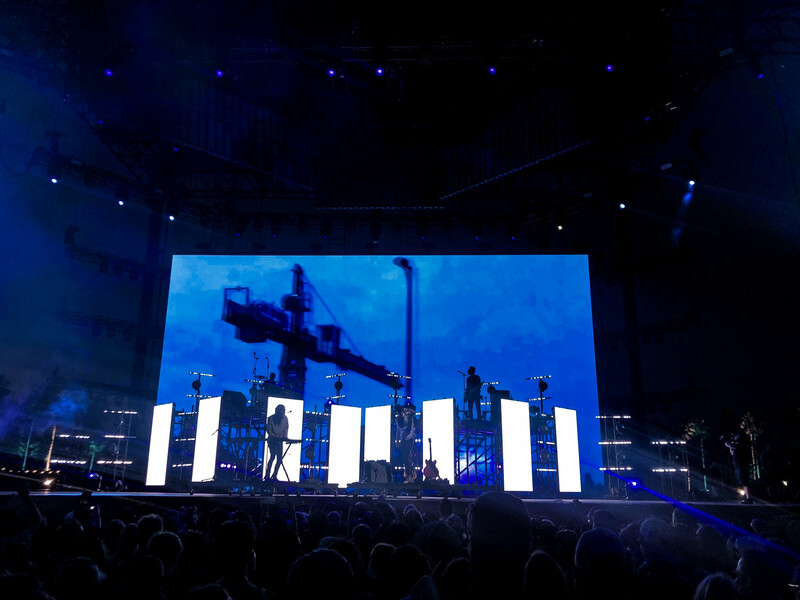 We were impressed with how you played off your design for Bob Moses at Coachella with the setting sun. Can you explain what you did to harmonize the looks you created on the stage that evening with their surroundings?
“The Coachella sunset is definitely iconic – and very well documented on Instagram, with many of the festival goers taking advantage of ‘Golden Hour.’ One thing that ended up really working with the Bob Moses setup in conjunction with the sunset was the use of our warm white lights. They added a raw tungsten aesthetic to the set which complemented the hue of the sun setting behind the stage. We created accents of contrast to this with the video content and the LED strips which were built around cooler colors in order to cut through the washes of warm light.

“Another thing that was important to me was to keep the set as skeletal as possible. We didn’t dress the risers – the understructures were left fully exposed. And all of the video tiles onstage were blow through. The LED strips and blinders were mounted onto single vertical pipes rather than bulkier truss. This turned the set into a sort of blow through mesh, allowing moments for the surroundings to bleed into the stage while also leaving options open to create impactful lighting moments with the fixtures during other parts of the show. Given that Bob Moses’ set started while it was still light outside, I wanted to embrace the surroundings, and keep them visible as part of the show rather than trying to hide them. The same idea went for the color temperature of the sunset tying in with the color of the blinders in the rig, with accents of contrast from other fixtures.”

How do you tie a stage into its surroundings without having those surroundings distract from the artist on stage?
“I think finding a contrast to highlight the artist is most effective in a festival setting, rather than trying to hide the surroundings. For instance, with Bob Moses, I used a lot of backlight in cooler or more saturated colors, which carved the band out from the warmer sunset. I also tried to place some of our lighting fixtures and video screens at head/torso height behind the band members, so that it was possible to create some bright silhouette moments even with the sun still up. The eye naturally focuses towards brighter light or contrast, so finding moments of video content or lighting effects to place around the band helped to draw focus to them without hiding the surroundings.”

Outdoor festivals take place in all types of settings, from beaches and forests, to valleys and urban neighborhoods. So, when you design for an outdoor festival, does the type of setting it’s in influence the type of lights or color scheme you choose?
“I think so, especially if we don’t have the luxury of video wall on the stage, or if there’s really beautiful scenery behind the stage. In these cases, I’d try not to block the surroundings. For instance, Bob Moses recently played an outdoor show in New York with the Brooklyn Bridge in the background. That gave us way cooler visuals than any video wall would have, so we built thin ‘fingers’ of blow-through video wall and LED strips into the set to create a dynamic show, while keeping the background completely visible behind. 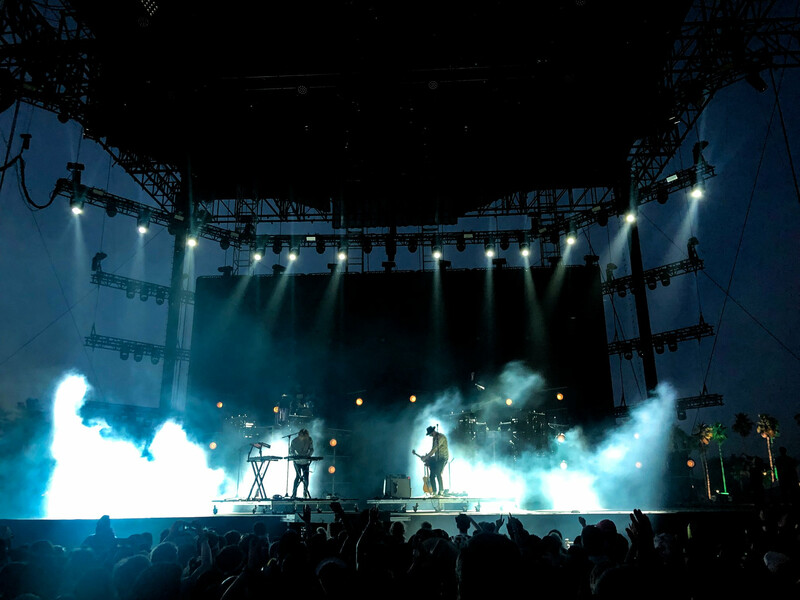 “Generally, there is an overall theme and aesthetic to an artist’s show that should remain consistent, but there’s no reason not to customize the rig brought to each show in order to complement the setting and what naturally works with it.”

Does the type of music a client plays influence the extent to which you will try to blend the stage with its surroundings? So, if you have a hardcore rock band and they’re playing at a festival in a pastoral setting will you try to minimize the connection between setting and stage?
“Every artist is different, and fits a different aesthetic. The rig that was used for Bob Moses was totally different from something I would send out with other artists. I think what worked well with their show is that we were going for a relatively raw, almost industrial look – it was okay that people could see the structure of the risers and see through the video into the background. This raw aesthetic in turn created a sense of darkness and mystery.

“I think it is important to embrace where you are playing. You should try to find ways to account for the surroundings in your show design, while fitting in with the overall aesthetic of the artist. Maybe there are some parts of the surrounding setting that you can highlight and use to your advantage, and even mimic in the production design. Then too there may be some parts of the surroundings that you want to pull focus away from. The important thing, in my opinion, is to keep in mind the aesthetic of the show, and then use pieces of your surroundings to the show’s advantage.”

Can atmospherics play a role in blending a stage with its surroundings?
“Yes. Hugely. Especially with the Bob Moses show, there were times during the show that I wanted to pull focus in toward the band and block out the background. We had a bunch of foggers built into our staging structures that created kind of smoke screen moments and also enhanced the backlighting, helping pull everyone’s focus in toward the band. Atmospherics can be a really useful extra visual layer when constructing a show and are often overlooked.”

Do you ever consider the surrounding environment when you busk? So, if there’s a particularly beautiful sunset going on, will that influence what you do with your lights?
“Honestly, I don’t busk too many shows. A lot of it is cued out, or at least different options are planned out and built into presets. If busking though, I think there are still effective ways to match colors, textures, etc. If there are trees or other natural surroundings around the stage, lighting those and bringing them to life can add a lot more to the show than having a few extra fixtures hitting the stage. It’s always worth stepping back for a moment and looking at the surrounding environment to see what it can bring to the show. It’s essentially free production design. There might be cool ways to tie it into the show that no one thought of before getting to the site.”

What is the most important thing to consider about your surroundings when designing for an outdoor stage?
“Among other things, it’s very important to look at where everyone in your audience is watching from, and considering what people all the way in the back row are seeing – they might not see much of the stage and the artist, but if you can find ways to extend the stage into the rest of the setting it makes the visual playing space way bigger and more immersive for the entire audience.

“This could just be as simple as cloning some backlight fixtures and throwing them towards scenic elements. It’s hard to visualize these extra elements of the show completely before arriving onsite. Actually being there and walking the space opens up so many more ideas. It’s important to consider the angles from which the audience will see the show, and what they’ll see behind and to the sides of the stage.”

When all is said and done, what’s the benefit of blending a stage with its surroundings?
“It’s sometimes easy to forget that not everyone is standing at front of house. Some people are packed in at the front row, and some people may be hundreds of feet from the stage. Blending a stage with its surroundings can help to create an overall more immersive experience for every concert goer as it creates a production that is much larger than the stage itself. It also creates a unique one-off experience that fans would not be able to get anywhere else, which really highlights a value of going to festivals and concerts in itself.”