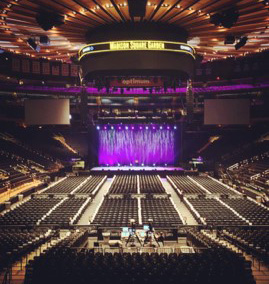 NEW YORK – Lighting designer Zach Bunner admits that some of his LD brethren might think that designing an arena tour for a two-time Grammy winner “without a rig full of beams and profile fixtures” would limit the looks of a show. However, Bunner proved otherwise by creating an intimate and immersive club-like feeling at venues from The Forum in Los Angeles to Madison Square Garden with a rig that relied heavily on the Rogue R2 Wash and STRIKE 4 multi formatted fixture from CHAUVET Professional.

Bunner of Showtime Sound worked his magic on the just-concluded Louis C.K. summer tour. The multi-talented comedian-actor-director, who has won six Emmys and a Peabody Award in addition to his pair of Grammys, wanted a lightshow that engendered the feeling of a comedy club or small theater, despite his tour’s outsized venues. Aerial washing from the Rogue R2s was instrumental in creating this environment.

“We used a small number of other movers, but the Rogues were the heartbeat of my rig,” said Bunner. “We positioned them everywhere. The Rogues made the show. They created the mood and the atmosphere around the arena so the audience could enjoy a night of great comedy as if they were at a club. This was the look Louis wanted for his opening comedians, as well as for his own act.”

Bunner had 24 Rogue R2 Washes in his touring rig. He positioned four of the units on the upstage deck, using them to wash the air above the artists. The remaining washes were positioned on overhead truss that ran across the middle and sides of the stage. These fixtures were used to colorize the stage and wash part of the audience.

“We set the mood with the Rogues,” said the LD. “Louis loves the feel of a New York style improv club. He’s not about the flashy strobes and the elaborate gobo and beam lighting looks a lot of other large name comedians have. He wants the artist to be the star. The Rogues were perfect for creating mood lighting all around the arena by washing the air, the stage and the audience. The Rogues performed flawlessly to create moods.” 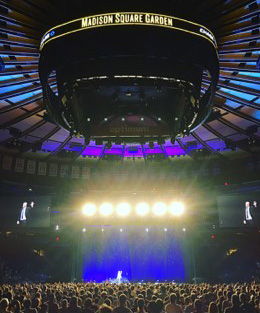 Positioned on downstage truss, the four STRIKE 4s in Bunner’s rig filled a variety of roles. Their most conspicuous function was to serve as audience lighting during the introduction and exit of Louis C.K. and the show’s opening acts.

“Louis loves being able to see the large crowds that come to his show,” said Bunner. “With the STRIKEs being so bright, they easily light up the whole arena. The power of the STRIKE 4 as a blinder engages the crowd. Then we get some nice mood looks when we use the fixture as a warm white wash.”

Bunner credits tour manager Beth Thomas with playing a big part in developing intimate stage presentation. “Beth helped make a lot of these looks happen,” he said. “It was a real accomplishment. We went to some of the biggest venues in the US and created a club feel that was truly intimate, just as our client wanted.”