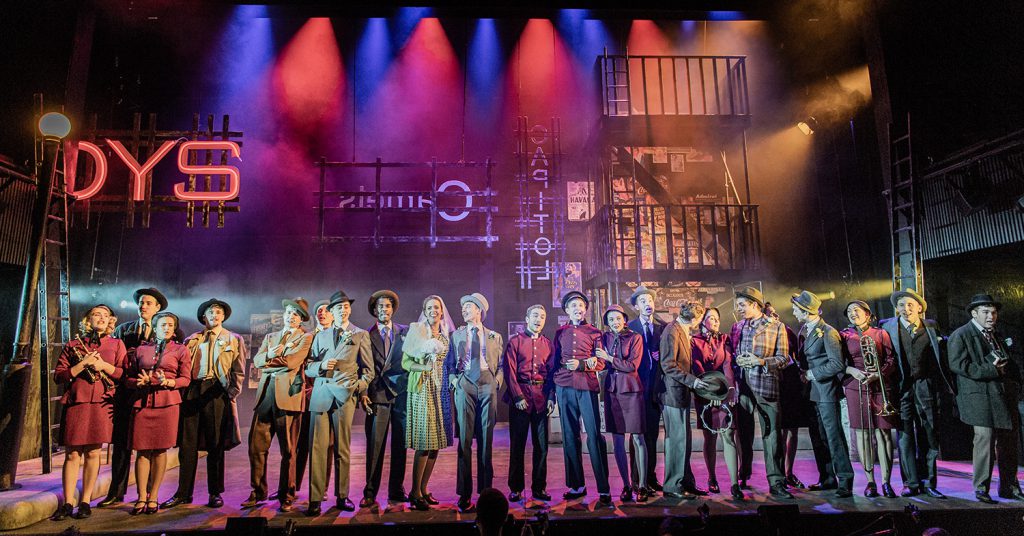 LONDON – Laurence Olivier called Sam Levene’s portrayal of Nathan Detroit in the original 1950 production of Guys and Dolls the greatest stage performance he had ever seen. More than two decades later, Sir Laurence himself was eager to play the role of the irrepressible rogue with a heart of gold in a 1971 revival of the play at London’s National Theatre.

That production never saw the light of day, due to an illness that befell the great star, but Guys and Dolls would go on to have more than a half dozen other major revivals in New York and London in the ensuing decades.

It’s easy to understand why even someone with the stature of a Laurence Olivier would be so taken with this Frank Loesser musical about the edgy underworld life of old New York. The rich and supple Damon Runyon inspired dialogue, colorfully jumbled mix of good and evil forces, and evocative portrayals of the Manhattan streets and Havana clubs that run through the play provide fertile ground for an actor’s talent to flourish. 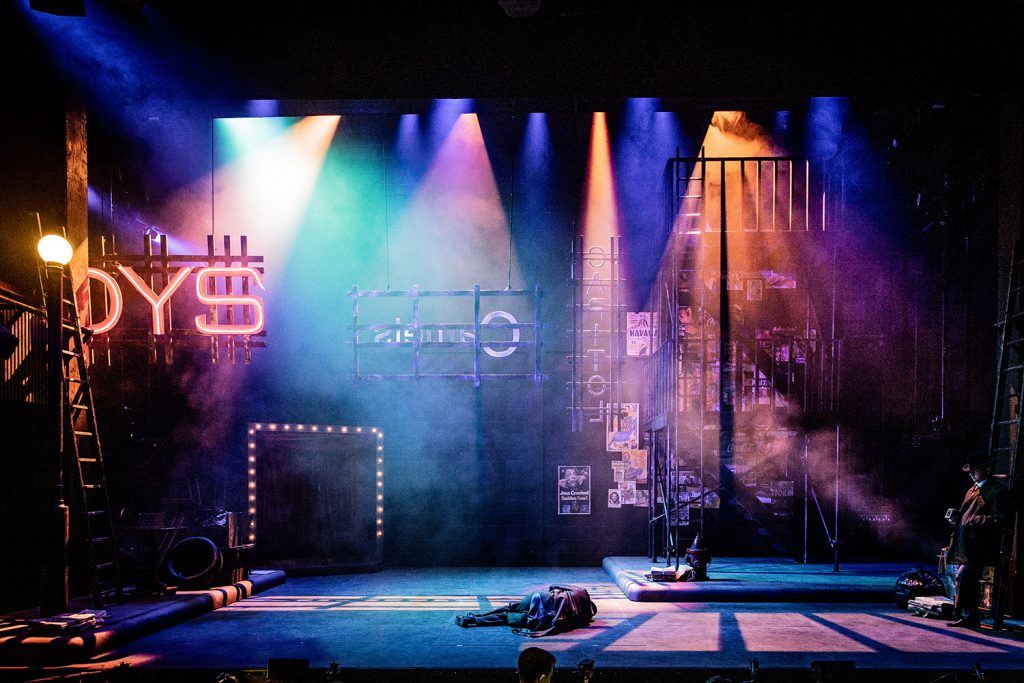 The same factors also make Guys and Dolls a creative dream-come-true for lighting designers. Mountview Alumn Adam King demonstrated this in a colorfully convincing fashion just before the COVID-lockdown put a temporary halt to live theatrical performances, when he lit a production of the multiple Olivier and Tony Award winning show at Mountview’s recently completed new location in Peckham, south London.

Helping him in this endeavor was a lighting kit that featured over 40 CHAUVET Professional Ovation LED fixtures supplied by White Light. King was very familiar with the potential of that kit, having been involved in the evaluation process that led to it being installed at the school.  He was eager to use the kit to light Guys and Dolls when he learned the theatre would be producing the play.

“I heard from a fellow creative that Mountview was considering this show,” said King. “It’s a great musical and a favorite of mine, so I approached Mountview and asked if they would consider having me light it.”

Given this opportunity, King embraced it with alacrity, creating a dynamic design that moved seamlessly in sync with the play’s many changes in scenery and emotional tones. Working with a set that was relatively open, he coordinated his lighting with key pieces of furniture and props to reflect changes in scenery.

“Some of the trickiest transitions were taking us from New York to Havana, or from a Manhattan street corner to its sewers,” said King. “This is where having an extremely versatile rig came in very handy.  We also never wanted to go to a black out in the show, so we had to transition smoothly to each location.  Using LED fixtures allowed me to do smooth live color changes to make this all possible.”

Indeed, color changes were critical in aiding the transition from scene to scene. King was happy with the range of colors, from soft pastels to bright saturates that he was able to get from his kit, noting that it would have been virtually impossible to create this palette with tungsten units. 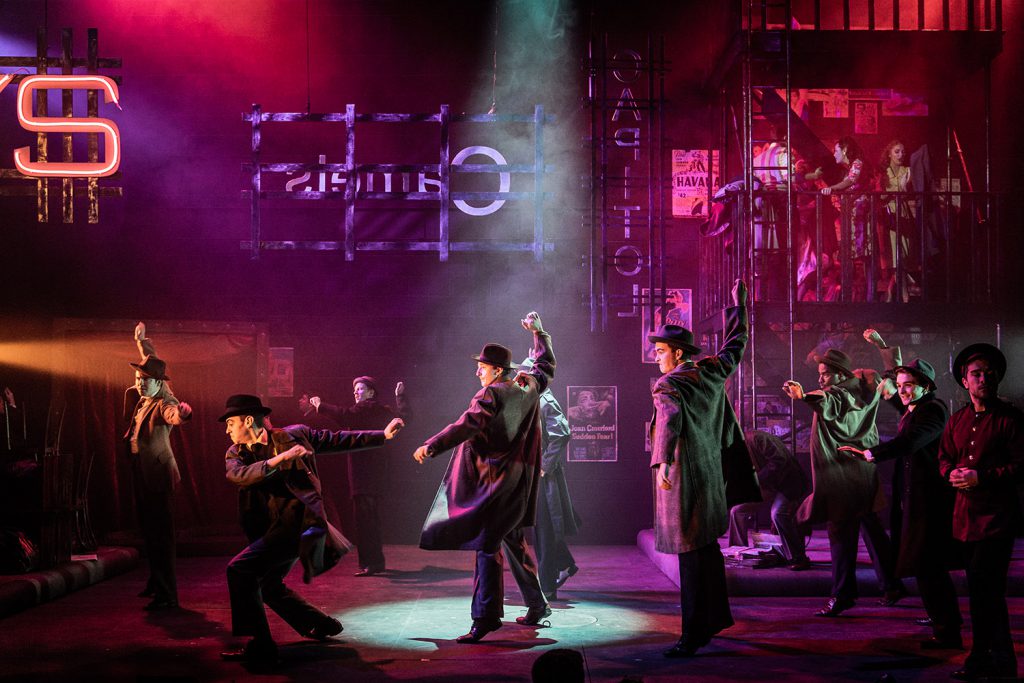 Key to creating these colors were the 15 Ovation E-910FC ellipsoidal fixtures in the kit, most of which were placed head-high on booms with the remaining units located in FOH positions.  The RGBA-Lime fixtures served as the main key light for actors’ faces, and were also used for texture and color on large group scenes.

Further contributing to the color-scape were Mountview’s 16 Ovation F-915FC Fresnels.  These fixtures were placed in three different positions: nine used as overhead top lights, six arranged on ladders and serving as high side lights, and one located FOH to provide a full stage color wash for dance numbers.

“The Mountview Production Arts staff have a bit of a joke suggesting that I never rig any direct front light and this Fresnel unit was the only one on this show,” said King.  “In actuality, I like to use much more sharp angles as it’s a lot more interesting.”

Rounding out the Ovation fixtures in the kit were eight B-2805FC batten and two B-1965 Batten fixtures. “The B-2805FCs had two positions – the first was a bar flown right out almost to the grid to allow the units just to skim down the back wall. These units are really punchy and I don’t think they ever needed to go above 10-percent,” said King. “The second position was actually above the grid. We had scenes set in the sewers and I wanted to get an effect of light shining through grates so I rigged two units above the grid to achieve this.

“As for the B-1965 batten, they were on booms at stage level and uses to get bold colors into the US set items and create some fun shadows,” continued King. “When you put the quality of our kit with the professionalism of our team, we had a winning effort.  Programmer Alex McManus helped me get through hundreds of cues in a very limited amount of time! I also owe a great deal of thanks to the rest of the LX Team: Production Electrician, Dan Foggo, LX Crew, Josh Rooney-Walker, and Followspot Operators, Conor Thornton & David Pughe and of course, the Mountview Production Arts staff team.”

Coming off this successful production, King is eager to get back to theatre again, which he undoubtably will once the lockdown is lifted. When that happens, as King moves on to light other plays, Guys and Dolls will inevitably be produced by another theatre. Then a new group of lighting designers will discover a wealth of creative opportunities in this timeless musical. 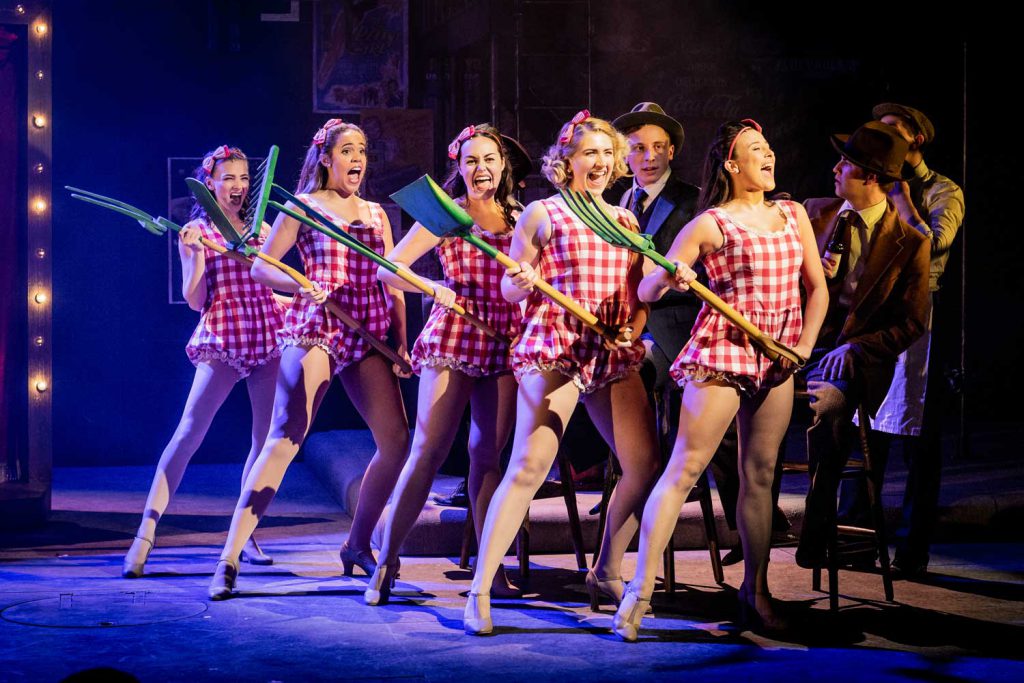