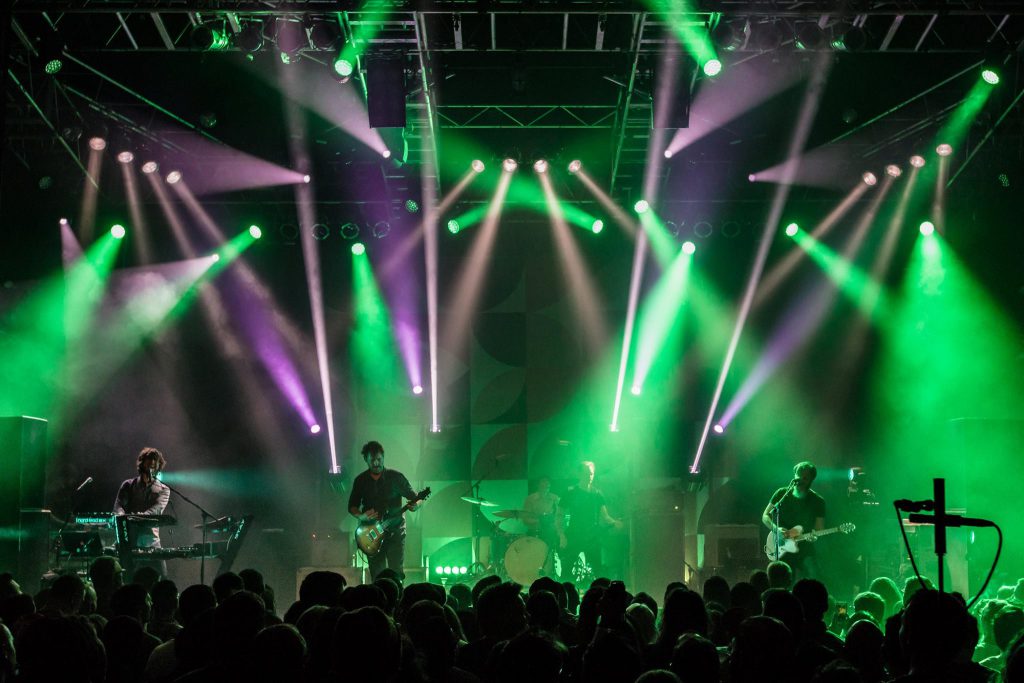 NEW YORK – It has been quite a run for Minus The Bear. Drawing their name from an inside joke about a 1970s TV series, the Seattle quartet never took themselves too seriously (part of their enduring charm), but their incredibly sweet guitar taps and over-the-horizon time signatures had a serious and very positive impact on indie music.

Now, after 18 years, six albums and 12 EPs, Minus The Bear is closing the book on their influential musical odyssey with a 32-city coast-to-coast US tour that runs from October through December. Providing an evocative visual background for the emotional tour is a Ben Jarrett lighting design that features CHAUVET Professional Rogue and Nexus fixtures, supplied by Squeek Lights.

With its arc of overlaying colors from lights that are positioned higher as they move upstage, Jarrett’s design creates a deep, multi-layered sense of space and time that accents the powerful memories that the band’s music calls forth. This is especially impactful when he selects palettes that tie into Minus the Bear’s history, such as when he has blue, yellow, orange and green chase across his Rogue R1 Wash fixtures during the seminal song “My Time” from the band’s Omni album.

“Generally, I am partial toward cooler colors, but on this tour, I shook things up and used more greens than I normally would,” said Jarrett. “I tried as much as possible to tie my colors into the history of the band as represented by its album art.”

In addition to using color, Jarrett relies on dimensionality to underscore the powerful emotional currents running through the farewell concert. This spatial component is enhanced by his arrangement of the eight Rogue R1 Wash fixtures in his rig.

“My lights are positioned to create an arc-like impression around the band,” said Jarrett. “Starting downstage right, the R1s are top-hung on pipe and base. The furthest downstage units are 2’; and the remaining lights increase in height the further upstage they’re placed, with the highest being at 8’. The first two washes and last two provide the bulk of my side light, while the remaining four function as my primary backlight.”

There are also eight Nexus 4×1 fixtures in Jarrett’s rig. He positions six of these units on the upstage deck to uplight the backdrop and relies on the other two to light the drummer and drum kit.

Jarrett, who began working for Minus the Bear in 2015 on their 10th anniversary Menos El Oso tour as their lighting director, is using cue stacks for the bulk of his lighting of each song. However, he also busks during key moments.

“The band gives me lots of freedom to design and make choices based on how I see their music,” he said. “Most of their input relates to the practical aspects of the tour. For example, the band makes extensive use of looping samples of their guitar riffs, which they quickly (and quietly) record in between songs. Because of this they ask me not to black out the stage for long, so there’s enough light between songs for them to see their pedal boards.

“Since this is the ‘Farewell Tour,’ I also took care to make sure there were plenty of big well-lit moments in the show for photos,” continued Jarrett. “The band has a lot of very loyal fans, and we wanted to make sure they had something good for their memories.”