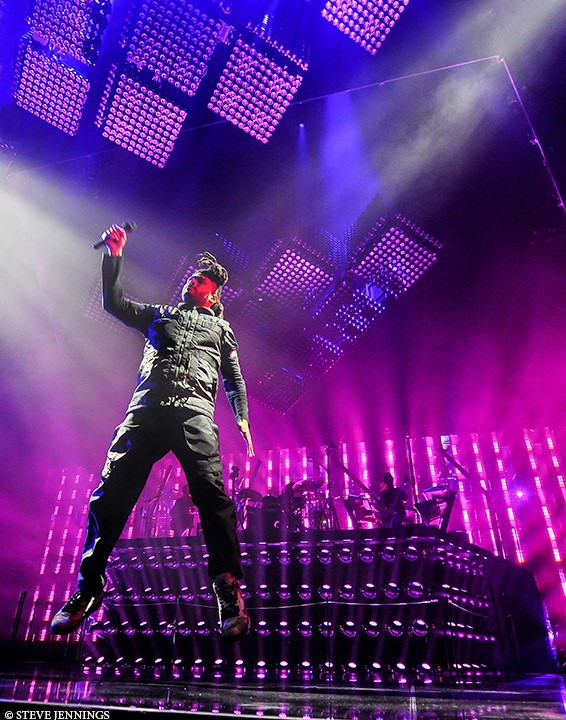 Steve Jennings on Concert Photography
Although he is known throughout this industry for his uncanny ability to distill the essence of even the most elaborate lighting design in still images, this acclaimed California-based photographer does not see his work – strictly speaking — as taking photos of lightshows. Defining his mission as photographing concerts, not lighting designs, Jennings goes beyond simply showing fixtures and effects. Instead, his concert tour photos balance the lighting and set design with the artist’s performance to capture a powerful moment in time.

Jennings’ holistic approach to photographing concert lighting has earned him a large and loyal following among designers and industry publications. His portfolio includes tours by artists like Madonna, Bruce Springsteen, Selena Gomez, U2 and many more. Outside of the lighting industry, he has counted Columbia Records, Sony, MCA, Epic, Warner Bros., Lucasfilm, and Disney as his clients.

Jennings sat down with us recently to talk about photography, his own career, why some colors of light are more difficult to photograph than others, and the fun of capturing the moment at concerts.

What was the first concert you ever photographed?
“It was probably Elton John back in the 70’s. After that first show I was hooked. I looked at Rock N’ Roll magazines, saw photos of musicians I liked and thought, that would be fun to get photos of these artists I like, but for myself — as I’ve always been a very visual person.”

We’ve always liked your photos because you have a knack for showing the lights without sacrificing the context that they’re being used in. Any advice on achieving balance in lightshows?
“Even if I’m shooting for a lighting magazine or lighting company, the artist or band on stage is always my top priority. Yes it can be about the lighting, but for me if the artist is not artistically lit, well exposed, looking good, I won’t use or submit the photo. Because lighting can and does change at a moment’s notice, I am always aware of the changing scenes as they happen. I go on instinct, am ready to change a setting on the camera at a moments notice, as I’ve always shot manually, I have to keep on my toes.”

When you go into a concert to photograph it, what is the first thing you look at?
“I look to see what the production is: big or small. I like to see what I might possibly expect – because I don’t always know in advance.”

Even though video has become ubiquitous, people still want photographs of lightshows. What is it about a photograph that you can’t get with a video?
“Capturing a moment in time is what it’s all about for me. Be it an artist jumping in mid-air, a production moment that shows the mood of the song, or anything that makes you then remember a specific part of the show. One photo can tell a story I think, bring memories of what you experienced. Video doesn’t do that the same way for me like a still image.”

Do you have a plan about how you’re going to approach photographing a concert before you get there? Do you know the set list? Are you familiar with the light plot?
“I will try to find out in advance what the production will be on a tour. I’ll get in contact with the lighting designer and/or director to get an idea what the design is, but many times I don’t see anything in advance and it’s just going on feeling.

“I do get set lists here and there, but to be honest if a lighting director gives me one and sometimes makes notes on it, after I’ve looked at it once, I don’t really refer to it again. It will be in the back of my mind, but I’ve always worked on the fly, relying on instinct of what’s going on or what may be coming up. I rarely know the light plots other than say casually talking with the LD pre show and he or she shows me something on their monitor in conversation about the design.” 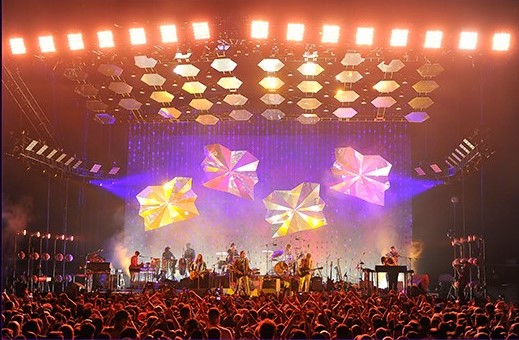 A lot of designers will punt during a concert. Based on what you just said, we’re assuming that doesn’t create challenges for you – correct?
“Yes, correct – No challenge whatsoever. Like my shooting style, it’s instinctual. As a self-taught photographer having done this most of my life it’s kind of second nature.”

Lightshows often unfold so quickly, do you try to anticipate where the show is going so you get a head start when taking photos?
“Because I’m seeing a show for the first time, maybe having only seen some pictures of the tour online, I don’t really know what to expect. Many times the music dictates what the design is going to be like. There’s nothing better than when I go into a show not knowing what to expect and walk away saying what an amazing show that was! That designer really nailed it! Also, when I’ve seen tours with minimal production but been impressed with how a designer used what they had been budgeted. Sometimes less is more and when you have a designer who really knows how to think outside the box, you can get great looking shows.”

Generically speaking what is the most difficult type of light to photograph in action?
“When you have a tour where say, the LD has been instructed by the artist for no follow spots or all back lighting, that’s always a challenge. When there’s just one color dominating the scene, say all red, or blue lighting, then the show can look like dark mush from a photographic standpoint.”

Do you have a favorite position you like to take when photographing a lightshow? Or do you like to move around?
“It’s all about what access I’m given per the artist or their management. It’s usually a standard first 3 songs in the front pit for press and then they are escorted out. More and more today, the press are shooting their 3 songs from the soundboard with increased restrictions.

“Since I get All Show Access, my position can be a combination of pit, the FOH soundboard position next to the LD or roaming. It all depends on what access I’m given. Some artist tours are very strict and some are very loose to roam around. Having long relationships with these touring production people who trust me gives me an advantage.

“The FOH position is favored for full stage production shots, but sometimes the pit is great for that wide angle look. Roaming is always nice to get a variety of different angles, such as the upper levels for that overall perspective. Each show’s stage production can dictate where I want to be at any given time, or if say it’s a show in-the-round.”

Is it easier to photograph lightshows for some types of music than others?
“Pop/Rock music is my favorite because those artists usually have budgets for fantastic lighting, staging, video and possibly additional FX such as lasers or pyro in their production. Next would be hard rock/heavy metal bands, as those artists tend to like BIG lighting for impact. Country music is so big it’s replaced so many rock bands (so sad) in terms of popularity, so they have budgets to put on great big shows with a lighting design that is usually impressive.”

Are certain colors harder to photograph than others?
“When ALL red (par can or moving light) or blue (moving lights) are used as the sole lights on a subject or stage scene it will almost always look muddy photographically, and many times to the human eye. Yet they are the primary colors used in rock n’ roll shows. It’s without the addition of fill lights, front spots, or side lighting that you lose detail in any features because the color bleeds. You’ll see this in film, digital form or video. As a back light, artist hair light, or accent light it’s fine, but nothing but ALL red, ugh!” 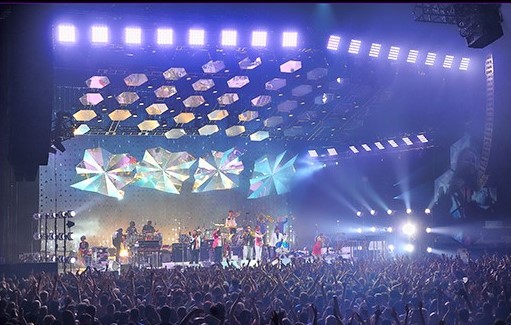 How has the emergence of LED video wall influenced your work?
“It hasn’t so called influenced my work. I love it when the LED video is used as a light source more than when it’s just used to show giant close-ups of an artist on the screen. It’s amazing that it’s almost limitless when you want to use it to project scenic imagery, abstract images, and seeing the LED panels in all kinds of different staging configurations in a production design.”

Being that they are visual people, do lighting designers ever critique your photos? Do they say they learn more about their own work by looking at your photos?
“It’s nice when I hear positive feedback from LD’s. I strive for the best every show I cover and so it’s great when I do hear nice words back. I can’t say LD’s really critique my photos though. It’s funny when I sometimes hear an LD say they have no photos of their tour except maybe crappy cell phone pictures so they’re happy I’m covering it. That can also be attributed to my sometimes being the only photographer allowed to shoot such and such tour because of a lockout on photographer coverage, much less the whole show access. I’m very happy to say I’ve met and become friends with some 800 or so lighting designers, directors, production and tour managers over the years and it’s always fun to see them on their new projects/tours.”

Earlier you mentioned your experience photographing the Elton John concert. Can you give us a little more background about how you got into photography?
“I started photographing concerts in the mid ’70’s when I was around 16 because I wanted to photograph my favorite bands that I saw in music magazines. After years of doing it strictly for my own enjoyment, in the ’80’s I tried to get my photos published in those same magazines. My first published photo was in Rolling Stone. After years of up and down my success grew from there. I sometimes wish I had taken photography courses but being self-taught, I’m happy to say has not hindered me from doing what I love, and later a career. When it came to the lighting side of concert photography, in the early ’90’s I discovered Lighting Dimensions, which was the king of lighting production magazines. I approached them with examples of my work and the next thing I knew I was shooting for them and then numerous other lighting magazines over the last 25 years.”

What’s the most important thing to remember when photographing a lightshow?
“Enjoy it when it’s good and don’t get too bummed out when it’s bad. Ha ha…”

Is there a “Steve Jennings style” of lightshow photography?
“Hmm…I don’t think I have a style, but that may be better asked by someone other than myself as one looks at their own work sometimes differently.”

Do you ever go to a concert an ordinary fan without your camera and without thinking about the lightshow?
“I always have a camera if I’m at a show. I’m a fan of most shows I shoot. It would be hard to enjoy a show as much if I wasn’t shooting it because I’d be thinking the whole time about the shots I could be capturing throughout. I can separate and enjoy both the job and the personal fan experience but at the same time.”