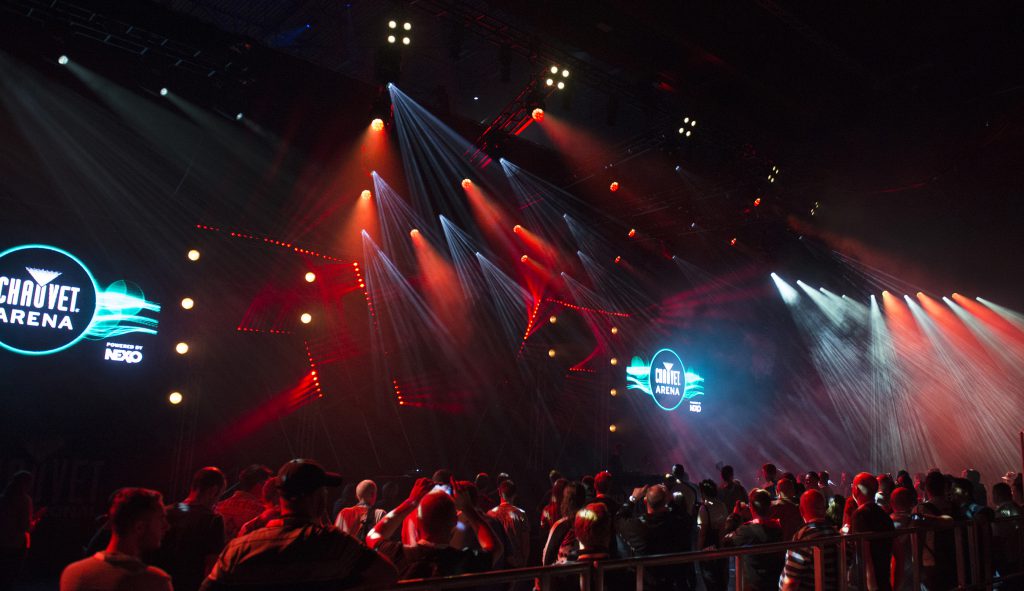 BIRMINGHAM, UK – The CHAUVET Professional Arena has always been a crowd pleaser at the BPM | PRO Show, but this year it broke all records for popularity. Aside from taking place at a new, larger and more impressive facility – the 16,000-capacity NEC Genting Arena – the event featured a stunningly bright and fast-moving lightshow programmed by the Above & Beyond LD Dave Kyle. The lightshow did justice to the new arena location with a stadium-ready production that featured a collection of new CHAUVET Professional fixtures like the Maverick MK2 Wash and MK2 Spot, STRIKE 1 and Rogue R1 FX-B.

According to CHAUVET Professional European Product Specialist Sam Bowden, the new arena presented the team at CHAUVET Professional with an ideal opportunity to exhibit some of the company’s latest and most exciting fixtures in their natural habitat. “When we learned of BPM | PRO’s expansion plans for the CHAUVET Arena, we realised we could create something on an entirely different scale this year,” he said. “As a result, we went for a lighting concept worthy of any large stadium tour. The CHAUVET Professional fixtures we chose to install reflect this.”

Whereas in previous years, the Chauvet Arena was characterised by a central LED panel screen, this year, two large screens consisting of 96 PVP X6IP screens were installed on either side of the central lighting core to award the arena with a true stadium feel. This arrangement simultaneously drew attention to the impressive central show design, consisting of 28 Rogue R1 FX-B moving heads and 36 x ÉPIX Bar Tour pixel-mapping 1-meter LED bars

“The central array of FX-B moving heads provided mesmerising looks, thanks to the tilts, pirouettes and rainbow like effects of the individually controllable LEDs,” commented Bowden. “Also cementing the central visual spectacle were ÉPIX Bar Tour fixtures, which accentuated the impressive capabilities of the Rogue arrangement whilst drawing attention to the central element on stage, thanks to the strip effects of the ÉPIX.”

Surrounding this selection of fixtures were 12 STRIKE 1 audience blinders. Currently launching in Europe, the fixture’s tungsten emulating light source created the kind of classic blinding looks to support the stadium style concept of the lightshow. To further support this theme, additional trusses were positioned on the sides of the stage to create a wraparound expanded feel. A collection of 16 Maverick MK2 Spots on these truss structures was used to light the room from multiple directions.

“It was really important for us to show what the MK2 Spot is capable of in this kind of large-scale installation,” continued Bowden. “The response to this fixture was amazing. The cutting beams and the brightness of the spots really attracted a lot of attention and surprised a lot of people. This fixture really took the show to another level.”

Thanks to this year’s enlarged venue size, five spreader trusses protruding over the audience could be installed to add to the larger stadium feel. In addition to 13 Rogue RH1 Hybrid and 11 Rogue R2 Wash fixtures, 18 Maverick MK2 Wash fixtures were positioned on the truss. “The MK2 Wash, simply put, was stunning,” commented Bowden. “Fantastic zoom and saturated bright colours ensured that Kyle’s lightshow looked and felt incredibly vivacious.”

The organisers of BPM | PRO were equally as enthusiastic about this year’s CHAUVET Arena. Mark Walsh, BPM | PRO founder and CEO of Marked Events, commented: “The CHAUVET Arena was a highlight for all visitors of the show.” He continued: “The selection of fixtures within the rig gave the visiting DJs and acts the ultimate platform to perform in the stadium environment. We can’t wait to see how it’ll develop further next year!”