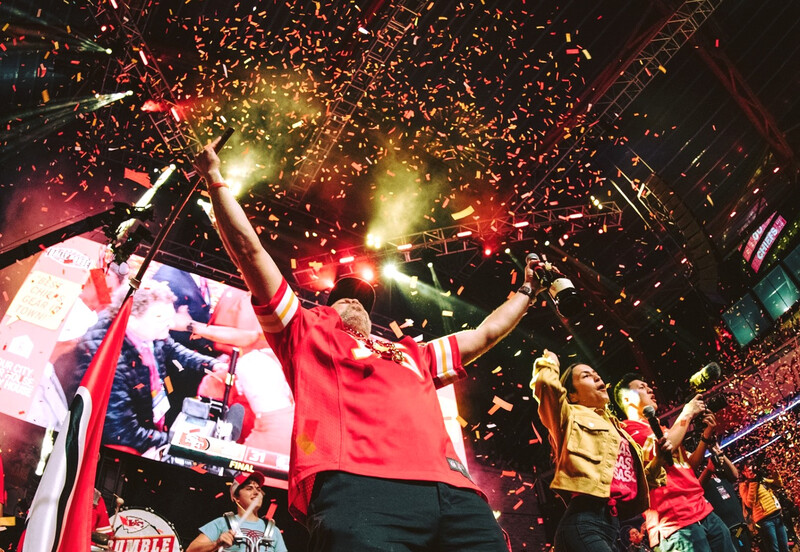 KANSAS CITY – Sunday February 2, 2020, 9:11 pm Central Time. . . Everyone in Kansas City will remember precisely where they were, and what they were doing, at that exact time. It was then that the game clock at Miami Garden’s Hard Rock Stadium struck zero, making it official that the Kansas City Chiefs had won their first Super Bowl in half a century.

In the heart of downtown, at the iconic Kansas City Live! Block, a deliriously happy group of 10,000 fans soaked up the moment in a sea of wild cheers and streams of confetti, accented by brilliant displays of light and colored fog created with CHAUVET Professional fixtures and atmospherics.

Jason Bradley, the Director of Entertainment and Production at the Kansas City Power & Light District, that houses over a dozen restaurants, bars, and nightclubs, recalls the unforgettable experience. “It was something special to be a part of,” he said. “Adam, Pete and Taylor from Harvest Productions, my technical staff for the event, put in some very long hours to make this vision a reality.”

With the hometown Chiefs trailing 20 to 10 at the start of the final quarter, it looked as if the anticipated celebration at Kansas City Live! might never take place. But Bradley and his design team never lost faith. When the Chiefs capped off their remarkable fourth quarter comeback with a victory, they were ready to unleash their visual extravaganza.

“Our guys were well prepared,” said Bradley. “We had a great cue made for the win to highlight the victory. Pounds and pounds of confetti were shot off. This is where the punch of the R2X beams got to shine, lighting up the confetti, the crowd, the venue and everything else in brilliant color. We also knew Fox Sports was going to come back to us for their live shot after the win, so we used our STRIKE 4 fixtures to illuminate the crowd for the cameras.” 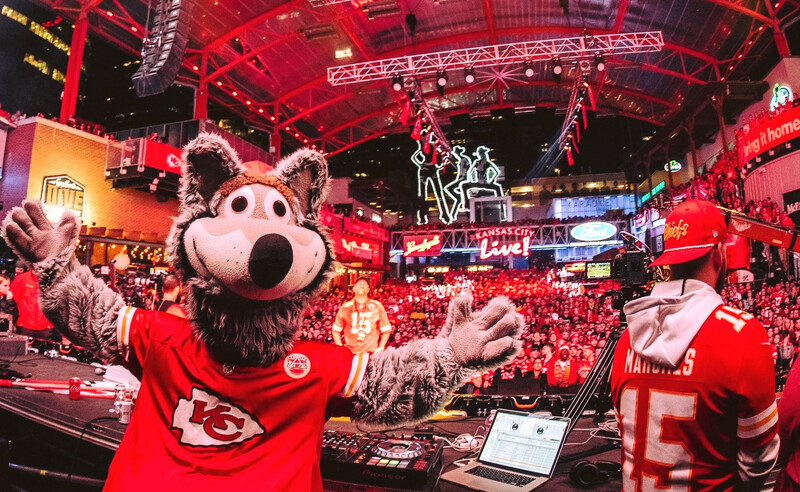 “We had 70 CHAUVET Professional fixtures for the watch party,” said Bradley. “On top of that, we had hundreds of CHAUVET Professional fixtures inside the different venues at the Kansas City Power & Light District. We covered the area with red and gold for the Kansas City Chiefs, and also used some of our Rogues to project the team’s gobos up on the roof.”

The fixtures that Kansas City Live! rolled out for the Super Bowl Watch Party represented only a portion of the lighting arsenal that Bradley and his team work with during the course of the year at their versatile and multi-faceted venue. 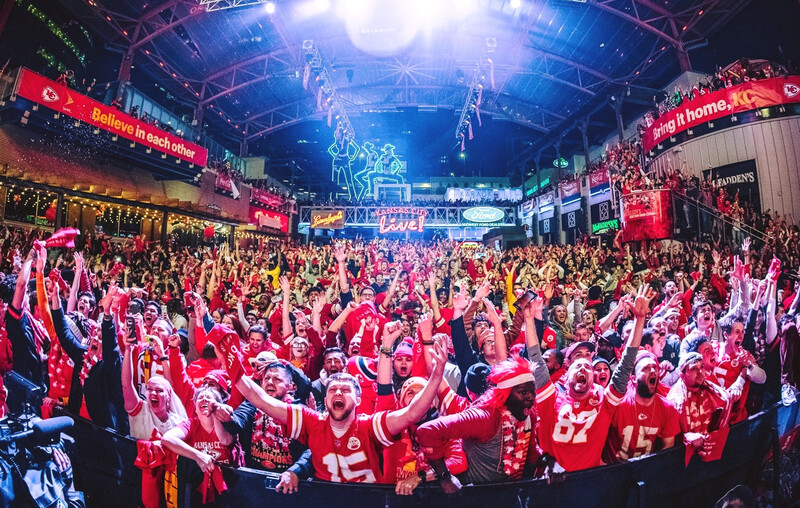 “We actually would have more fixtures than this out for our concert season,” he said. “We feature a wide array of music outside from country to EDM, so I try to design a lighting system that once deployed, can mostly stay in the same configuration and be adaptable for all guest LD’s and tours. The MK2 spots on the up and midstage are great; and country artist love them for the more classical use of a spot fixture.”

To light EDM acts, Bradley relies on its Rogue R2X Beam fixtures. “These are great fixtures for EDM shows, because they offer that extra eye candy,” he said. “You also can’t beat the STRIKE 4s when it comes to a great audience blinder. New to the rig for this season will be 24 COLORado Solo Batten 4s. We will be using these more as eye candy and audience blinders/strobes, as they will be faced to orient the crowd. Also, we have added 6 MK2 Spot Profiles to the downstage.

“Out over the crowd, we have added two 50-foot trusses that will contain Rogue R3 Wash and RH1 Hybrid fixtures,” continued Bradley. “We’ll also have R3X units will be replacing all stage wash fixtures. We have a 40-foot 3mm LED wall upstage, and we need all the punch we can get from our stage fixtures to help cut through their light.”

Bradley notes that he and his team have great plans for their expanded rig. But on this early February night, they, like the rest of Kansas City, weren’t thinking about the future. They focused instead on celebrating a very special moment.