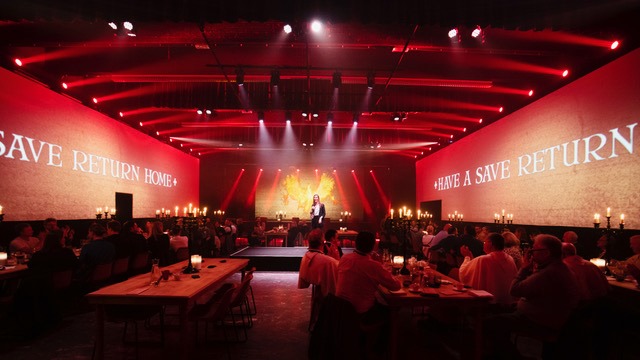 GRIMBERGEN, BELGIUM – A new chapter was added to the rich and widely heralded tradition of Belgian beer making recently thanks to the discovery of a medieval manuscript. Hidden away by monks of the Grimbergen Abbey in 1798 to avoid advancing French revolutionary troops, the recipe, written in Latin and Old Dutch, was unearthed about four years ago in the monastery’s archives.

This May, after much painstaking research, the monks were ready to release their resurrected brew to the world. (The original Grimbergen beer is so legendary, it is still used to brand the products of modern breweries.) Rolling out such an iconic beverage after a 220 year hiatus, calls for a special celebration, which is exactly what the Grimbergen Abby monks created, putting on Grimbergen Experience Days, a debut event for their business partners and beer connoisseurs from around the world.

Adding an appropriate level of visual excitement to the proceedings was a lighting design by Thomas Boets of LDP who was retained by Fast Forward. Boets’ rig featured a collection of CHAUVET Professional LED fixtures and video panels that included 60 Rogue R1 Wash, and 16 COLORdash Batten-Quad fixtures as well as F4IP tiles supplied by Steven Lagaisse of SVL Rent. 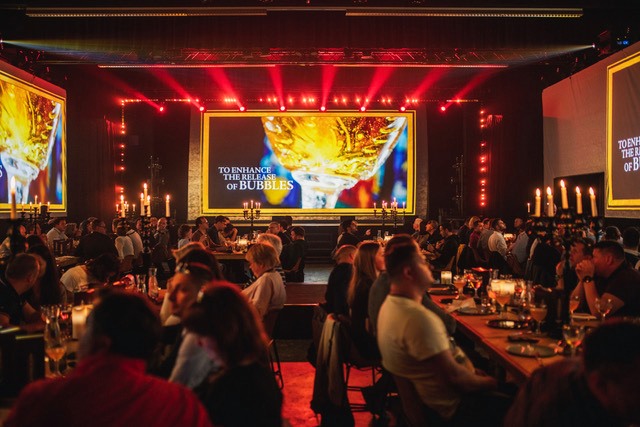 Stefan Uyterhoeven of MOJUICE was the content and show director for the event, which was completely wrapped with textile projections, and took place at Pheonixcourt (Fenikshof), the future site of the micro-brewery that will produce the beer.

Through his employment of 60 Rogue R1 Wash fixtures positioned from a number of different trussing positions, Boets was able to highlight the contours of the architectural space through subtle use of the fixture’s saturated wash effects. Furthermore, through use of the lights’ vivid red color output, he evoked a sense of fire and flames, a poignant and immersive tool to embellish the image of the Grimbergen Abbey.

Boets also relied on the Rogue R1 Wash units to usher in a number of different supporting atmospheres for the evening’s varied program of events, which included a dinner, presentations and musical performances. Quick color changes from the Rogue fixtures worked to alter moods and provide a useful counterpoint to the projections. This allowed Boets to create smooth changes in atmosphere without having to introduce new decorative elements to the venue. 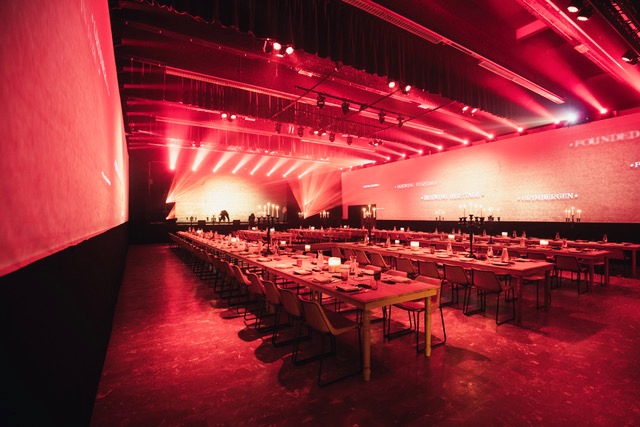 To accentuate the contours of the actual stage area, Boets utilized 16 COLORDash Batten-Quad 12 fixtures, which he positioned above and to the sides of the stage. To ensure a harmonious look with the rest of the venue, the fixtures’ linear LEDs were employed to create a saturated glow around the stage as well as key light during presentations. Thanks to the relatively compact footprint of both fixtures, they were able to blend into the surroundings, ensuring distraction was kept to a minimum, even when subject to the relatively tight confines of the low ceiling.

The LED screen made of F4IP tiles was used as a teaser in the entrance hall of the location. Visitors to the main room sat in the middle of a 270° projection screen that displayed content showcasing historical events involving the monastery along with presentations and performances. The projection screens served as integral décor elements to give guests the feeling of being part of an immersive installation.

With Boet’s immersive lighting concept providing a thematic link between the beer and the historical space, Grimbergen Experience Days succeeded in drawing the world’s attention to the history and prowess of Grimbergen brewing. Hopefully, with a little bit of luck (and a couple of 10.5% beers), the Grimbergen phoenix will be staying around for at least another 220 years – and beyond.