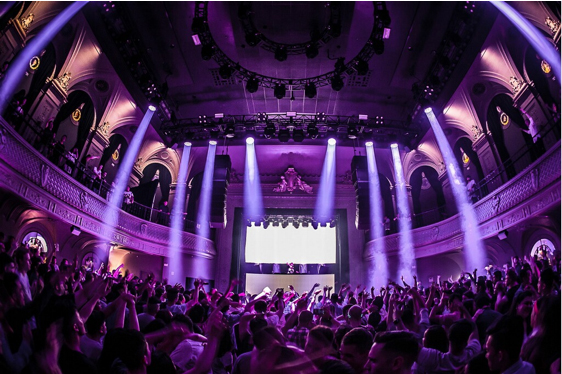 SAN FRANCISCO – August Hall is following in some giant footsteps. Opened this spring in the heart of Union Square, the 1000-capacity club is only a short distance from legendary music halls like the original Fillmore West, as well as leading current day entertainment sites like the Bill Graham Civic Auditorium, The Masonic, and Great American Music Hall. Building on this tradition, while adding next-generation lighting and sound technology, the new venue, which has a partnership with Live Nation, is hosting artists from every musical genre as well as comedians and corporate events.

Providing visual support for the diverse mix of performers that appear on its stage is a flexible lighting rig installed by Don Lynch of Commercial Audio Video Solutions, Inc., that features a collection of over 100 CHAUVET Professional fixtures and LED panels.

“We worked closely with house LD David Belogolovsky of OwlVision, LLC., to design a very rider-friendly rig that could work as well for an EDM artist as a rock band or spoken word performer at a corporate event,” said Lynch, who was also responsible for installing the hall’s audio, video, surveillance, and networking systems. “Our lighting rig had to be bright and punchy enough for some of the most intense acts, while still being able to provide subtle washes when needed. At the same time, of course, it also had to fit within the budget of a venue this size.”

After evaluating different options, Lynch and Belogolovsky put together a rig that includes: 16 Maverick MK3 Washes, 38 Rogue R2X Spot fixtures and eight STRIKE 4 warm white blinders. This collection of fixtures can easily fill the entire hall with light, in addition to creating an endless variety of looks on stage. Also included in the rig are 52 F3 LED video panels configured in an impressive double center stage rectangle formation.

Lynch and Belogolovsky hung six of the Maverick fixtures in their rig on the upstage truss and an equal number on the downstage truss. The four remaining units were flown over the audience area.

“We use the Mavericks for washing artists on stage and for general lighting effects,” said Lynch. “Their wide selection of macros really provides us with the flexibility we need. Also, their intense output gives us the coverage we want from a relatively small number of fixtures, which helped keep us within budget.”

According to Lynch, the wide (7˚ to 45˚) zoom range of the Maverick MK3 Wash helped his team meet the challenge of lighting the venue’s relatively shallow stage. “The depth of the stage and space available for a lighting truss behind the proscenium meant that washes with a very wide zoom, high output, and compact footprint had to be specified and placed strategically to ensure a full wash of the stage,” he said. “The MK3s were the right fixture for this application.”

The Rogue R2X Spot fixtures in the rig also contribute to its flexibility and efficiency. Lynch and Belogolovsky have 24 of the Rogue units positioned on two concentric circle trusses that can be raised and lowered above the dancefloor. Another eight fixtures are hung on 20’ house left and house right truss runs. The final six units are part of a portable floor package.

“We selected the Rogues for their value and their LED light source, which saves the venue on lamp replacements,” said Lynch. “The fixtures on the circle trusses are used for geometric lighting effects, while the remaining fixtures are great for gobo projection.”

Positioned on downstage truss as well as on house left and right linear trusses, the eight STRIKE 4 fixtures in the rig are used as blinders. At times, they are also called upon to add an extra dimension to lightshows by displaying some unique chases created by Belogolovsky.

At the center of many shows are the two levels of center stage video walls. The upstage wall, which is made up of 39 panels, serves as a digital backdrop for the stage. An additional 12 panels are designated as part of a removable floor package and are typically used in front of a DJ booth or for corporate events. The multi-level video walls add a great sense of depth to the stage and work with the moving fixtures to create an immersive look throughout the entire room.

“We’ve gotten excellent feedback from the visiting LDs who have worked here,” said Lynch. “Our package of fixtures and panels is helping them create dynamic visuals, regardless of the type of performance they’re lighting.” 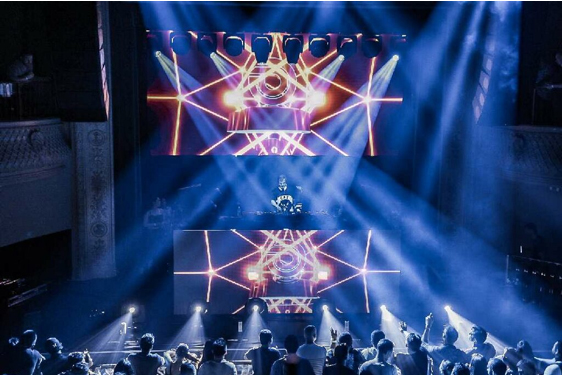