With the Midnight Mafia organisers promising to deliver “the biggest event to date,” the pressure was certainly on LD Arian Yegenah to come up with an entertaining visual concept to delight the expectant 7,000 partygoers. To award the 5,400 square metre space with an added visual dimension, Chameleon Touring Systems Australia acquired 14 CHAUVET Professional Vesuvio RGBA fixtures from Australian distributor Showtools to provide Yegenah with illuminated fog effects to fill the hugely impressive event space.

Yegenah placed two Vesuvio RGBA fixtures on each of the seven moving truss arms suspended from the rafters 22 metres above the ground, which could be elevated and lowered to present the overall event space both with kinetic fluidity and changing aerial dimensions. To the delight of the partying audience below, the full ferocious intensity of the Vesuvio RGBA with its 40,000 cubic feet per minute atmospheric fog output was unleashed during climatic moments throughout the festival, giving Yegenah a key tool to deliver a versatile array of effects.

“The Vesuvio’s lush plume effects created a visual spectacle for the clubbers,” commented Yegenah. “The thick billowing fog that the Vesuvio is able to produce is quite impressive, and even the most cavernous of spaces like the Sydney Showgrounds are lost in haze in a matter of seconds.”

The combination of the Vesuvio’s ferocious fog output and RGBA LED intensity allowed bursts of fog to disperse onto the crowd at various stages of the festival and produce differing illuminated effects during the various artists’ sets.

“Thanks to the RGBA LEDs of the Vesuvio, the atmospheric fog effects are brought to completely new levels of intensity,” commented Yegenah. “Specifying the Vesuvio gives us something really unique: we have all the advantages of a conventional fogger with the added benefit of a wash fixture. It’s an extremely versatile tool to have in one’s arsenal.”

Given that the festival lasted the best part of 12 hours, one of Yegenah’s key logistical considerations with regards to the choosing a suitable fog machine was durability. “The Vesuvio’s 2.5 litre tank offered ample fog supply,” commented Yegenah. “We didn’t have to worry about the Vesuvio’s tank running short even after a whole night of heavy use; nor did we have to worry about reliability. The fixtures performed flawlessly.”

The reception of the latest Midnight Mafia outing was extremely positive, with fans enjoying the visual atmosphere as much as the energetic music. “Admittedly, we weren’t using the Vesuvios every single second of the event, but we found that we were able to induce fantastic moments of euphoric energy at key points in the sets when the Vesuvio was employed,” concluded Yegenah. “For those of us who love this kind of music, building those peaks and troughs is what it’s all about. To this effect, the Vesuvio was indispensable.” 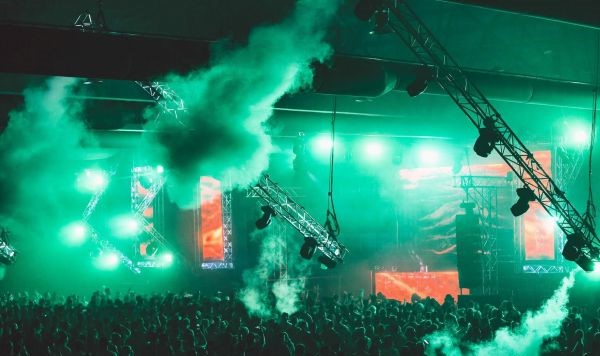