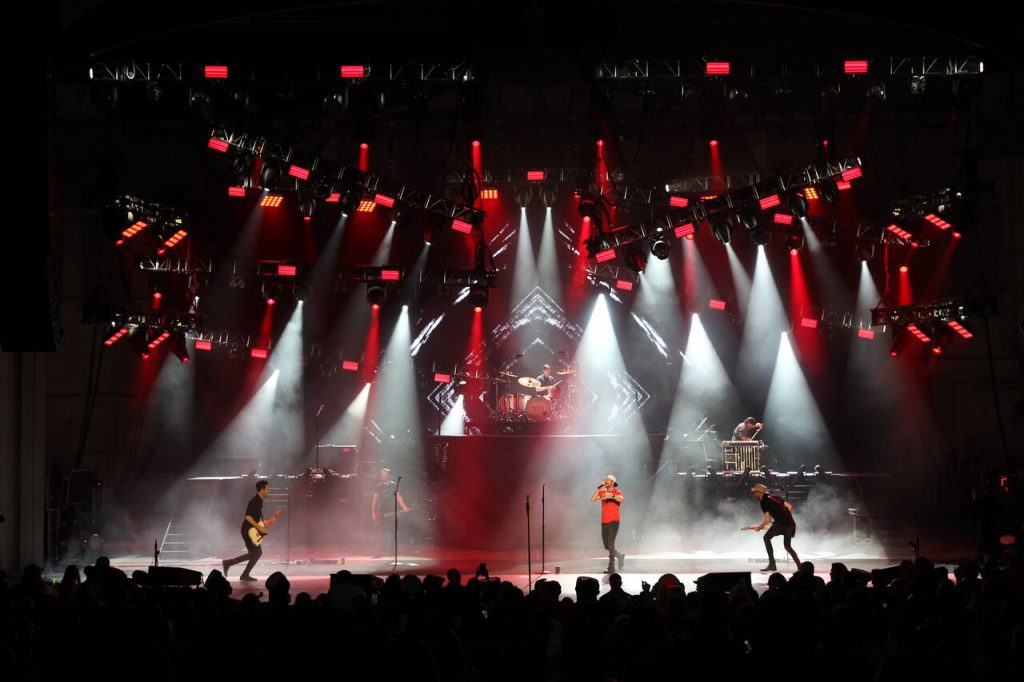 NASHVILLE – No sooner had country superstar Dierks Bentley kicked off his winter “What The Hell” tour, than he announced he would be extending his road show into the summer in order to reach more fans at outdoor venues. It was a wise move. The Arizona-born and Nashville-based star is currently riding atop the Billboard Hot Tours chart, playing to more than a half million fans this year. Supporting him every rollicking step of the way is a Chris Reade-designed lightshow that features 26 CHAUVET Professional Nexus 4×4 panels supplied by Christie Lites.

Reade is flying 14 of the panels on diagonally-oriented truss structures that vary from roughly 12’ to 24’ in height. The remaining 12 Nexus units in Reade’s rig are underneath a B stage, located about 200’ from the main stage.

Arranged in a web-like pattern on the overhead truss, the mainstage Nexus panels form a matrix of light over the performers. “The panels create what I call a halo effect,” said Reade. “Basically the stage is surrounded by the Nexus units, so they give me coverage, regardless of what else is happening with the other fixtures. In this sense, they are the workhorses/ safety net of our rig; they give us more confidence to do different things.”

The light halo created with the Nexus panels also ensures good views of Bentley, one of the more animated live performers on the touring scene, as he jumps, swivels and runs across the stage in his trademark fashion. When they aren’t serving as a visual anchor, the fixtures help juice up the star’s harder rocking songs and party anthems like “Drunk on a Plane” with their vivid colors and intense output.

“We are getting some great eye candy from the Nexus,” said Reade. “We run the panels at full brightness and full DMX – and they really pop. They are lovely instruments. They look fantastic to the eye, in photos and in video. I’m very impressed with them.”

Like the mainstage units, the Nexus panels on the smaller B stage are serving multiple functions in Reade’s lightshow. In addition to enhancing the sense of intimacy in the closing moments of the concert, the fixtures help the LD adjust his design to accommodate the outdoor venues that have been added to the summer leg of the tour.

“The Nexus units under the B Stage are used primarily for eye candy in arenas where the crowd is much higher, and they work very well,” said Reade. “In sheds, they are just lit while Dierks is on the B stage, so we can fill out our look, since most amphitheaters cannot reach the B Stage with the followspots. Whatever we ask of them, the Nexus fixtures deliver.”

Designing for a successful tour is always fun, says Reade, especially when you have such cooperative gear, as well as supportive teammates. “I can’t say enough about the people involved in this tour,” he said. “Production designer Bruce Rodgers and Rod (‘Red’) Gibson and Huntly Christie from Christie Lites have been amazing. So have Scott Scovill from Moo, Marc (‘Chainsaw’) Wuchter, our head rigger/lighting crew chief, Sebastien Richard, Jacob Alexander, Tim Lighthall, Andrew Williamson, production manager Jay Ballinger, tour manager Tom Addison and especially Dierks. Everyone likes working together, and I think that comes off, not only in the music, but also in the visuals we’ve created.”