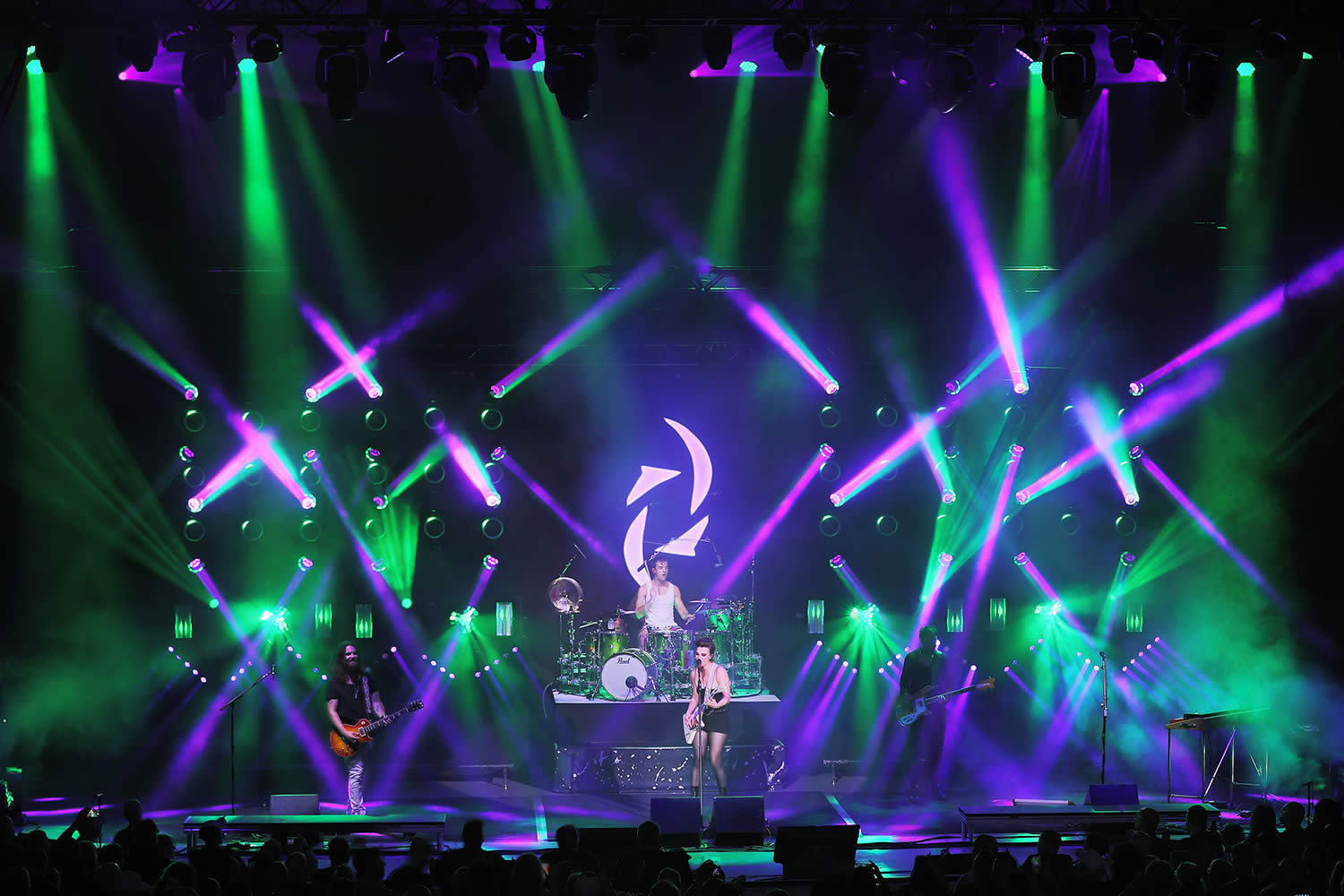 NASHVILLE – Craig Richter believes in coming out of the gate fast when lighting a concert. “When the first song hits, I like the audience to get a full immersion of sound and light all at once,” he said, explaining his approach to design.

Richter’s philosophy was on full display recently when he lit Grammy-winning rockers Halestorm on their coheadline tour with Alice Cooper. As soon as singer Lzzy Hale belted out the first notes of the band’s opening song, the audience had its collective head blown back, not just by the raw power of the music, but by a sudden and ferocious outpouring of light from a rig that featured 52 CHAUVET Professional fixtures, supplied by Bandit Lites.

“This is an intense, no-nonsense rock band, so I wanted our show to match that feeling in terms of its power and directness,” said Richter. “The overall idea was to create a big massive look. I always aim to give the crowd a wow moment multiple times during the show, but I also don’t want to distract from what the band is doing on stage. People paid to come see Halestorm not me. So, for this design I wanted an old-school look with a big wall of light behind the band, kind of like back in the par can days, but at the same time I needed more versatility than what par cans can offer.”

Although Richter’s show crushed the senses with its massive and powerful looks, his rig was put together with some strict practical concerns in mind, given that his client was touring with Alice Cooper. “The biggest challenge was in the beginning with stage space needed,” he said. “Cooper had a new large set and lots of props that took up a good amount of room. Thankfully, the Cooper camp is super friendly and were willing to accommodate us in any way they could. We designed the Halestorm system so it could go on and off stage quickly, while still looking like a headline system.”

Almost all of the fixtures in the rig were held on custom-built set carts made by Gallagher Staging to expedite the setup process. Most of them were on a mast in a grid pattern that cranked up to 14′ high. Richter coaxed big looks out of this very mobile system through his adroit use of the rig’s versatile fixtures. A good example can be seen in how he deployed the 12 Rogue R1 FX-B units in his rig. 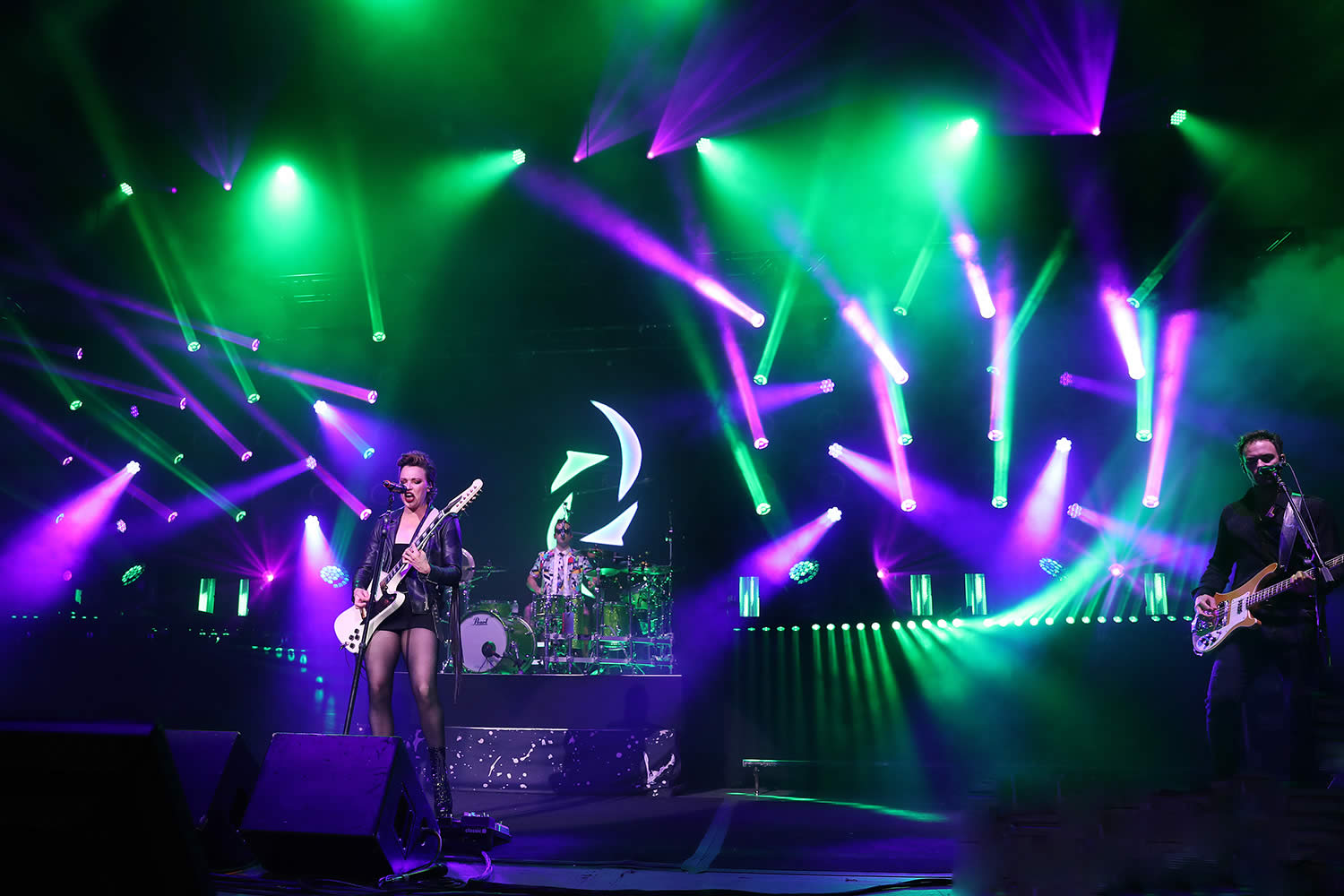 Hung on the base of the set carts, the Rogue R1 FX-B fixtures were yoked out 90° to take full advantage of their continuous pan and tilt feature. “I positioned the FX-Bs as low as I could to save space, but high enough to have an impact,” he said. “Their intense output allowed me to get away with doing this. Having them at 90° even at that level gave me some excellent movement. Really, the FX-Bs were an easy choice for me. I have used other similar fixtures on past tours, but none seem to be as punchy. Plus, having the ability to tilt each cell is a game changer.”

Also adding an extraordinary level of versatility to Richter’s lightshow were the 32 Maverick MK Pyxis fixtures in his rig. Mounted on the upper sections of the set carts in a grid pattern, the Pyxis units worked with the Rogue R1 FX-Bs and other fixtures to create a captivating matrix of crossing patterns on stage. At other times they were used to provide intense downwashes on band members. They also served as eye candy by displaying varying patterns from their outer rim of pixels.

“I heard about Pyxis from Jake Tickle at Bandit and was super interested,” said Richter. “Then I got a chance to see them at LDI and was very impressed. So, at the beginning of this year I knew I had to have them, because they fit so well with the existing look I was going for with Halestorm.”

“The center dot part of the Pyxis really punched through when mashed up with any other fixture I was using, be it from local production as well as with this Cooper system,” continued Richter. “The outer ring of the Pyxis gave a unique look for a fixture, and it could really flare out the stage if needed or create a different style beam.”

Richter also was innovative in how he used the eight Nexus 4×4 panels in his rig. He positioned the LED panels under the grated drum riser, so they could serve as uplights. “This may not be the conventional way of using these panels,” he said, “but I departed from a lot of conventions on this tour.”

Of course, there was one rule Richter didn’t depart from: he started his show with a visual roar—and once underway, he never looked back.