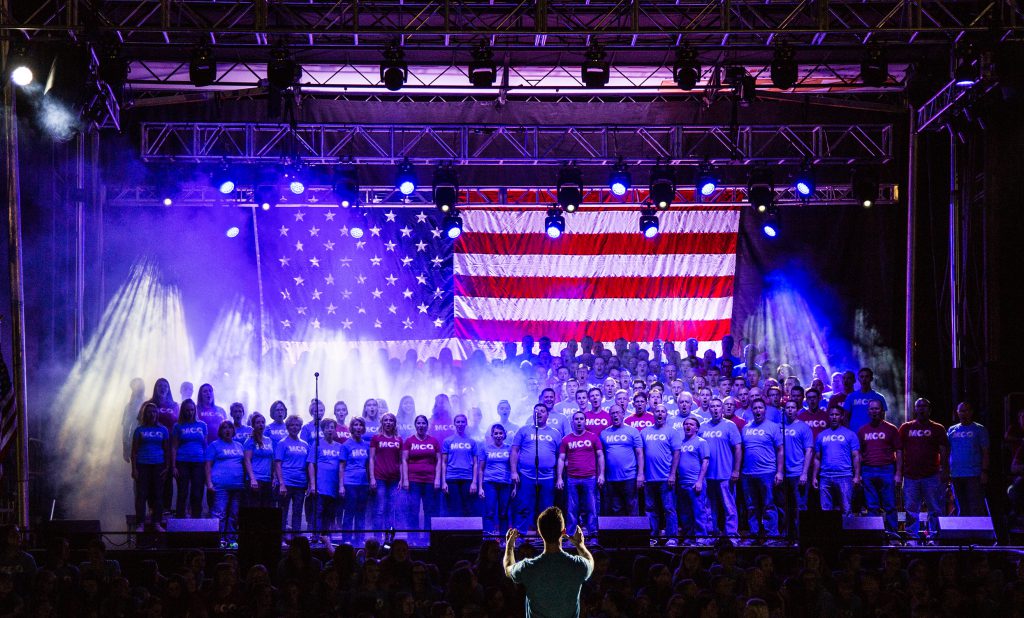 GILBERT, AZ – On August 2, 1956, US President Dwight D. Eisenhower signed papers that enacted “Constitution Week.” Since that time, communities throughout the United States have used the occasion to commemorate and honor the 4,543-word document that has served as the framework for the country’s legal system for the past two-and-a-quarter centuries. In most communities, these celebrations pass in relative obscurity, but not in Gilbert, Arizona.

Located 22 miles southeast of Phoenix, Gilbert holds what is widely regarded as the largest Constitution Week celebration in the US, complete with food, fireworks, theaters, live music, flyovers and educational programs. A highlight of this year’s event was a stirring performance by the 700-voice Millennial choir that was illuminated by a collection of CHAUVET Professional fixtures supplied by Creative Backstage.

John Garberson, owner of Creative Backstage, who served as the lighting designer for the event, used eight Maverick MK2 Spot and 24 Rogue R2 Wash fixtures, as well as four STRIKE 4 multi-formatted warm white fixtures, in his rig, which was arranged on a Stageline SL320 stage measuring 72’ wide with added decks.  The CHAUVET Professional fixtures did double duty — lighting the key performers on stage as well as those assembled in front of the structure.

“The lighting had to create a unified look between the stage and that area in front of it where we had the conductor and a group of performers,” said Garberson. “We had to make sure that the conductor was brought into the picture with light, since he was obviously a very important part of things. The fixtures we used had the output to pull the whole scene together both on and off the stage.”

Garberson relied on the intense output of the Maverick MK2 Spot to pull the stage and the area in front of it together. He flew all eight of the 440W LED fixtures on mid-stage truss in a straight line, and aimed them at the area occupied by the conductor and performers. The fixture’s 13⁰-37⁰ zoom angle allowed him to vary the coverage area at different points during the concert, and its CMY+CTO color mixing gave him the option to create varied looks.

The 24 Rogue R2 Wash fixtures in Garberson’s rig were flown on upstage and side stage truss, as well as over the stage apron. From these positions, the RGBW fixtures provided colorful washes on, and in front of, the stage.

Adding a warm glow to the patriotic concert and providing some intense audience lighting were the four STRIKE 4 fixtures in the Gilbert Constitution Week rig. “These are LED fixtures, but their tungsten look really warmed things up,” said Garberson. “The stage really glowed at night during the performance, and the overall visual image combined with the music was really very moving.”