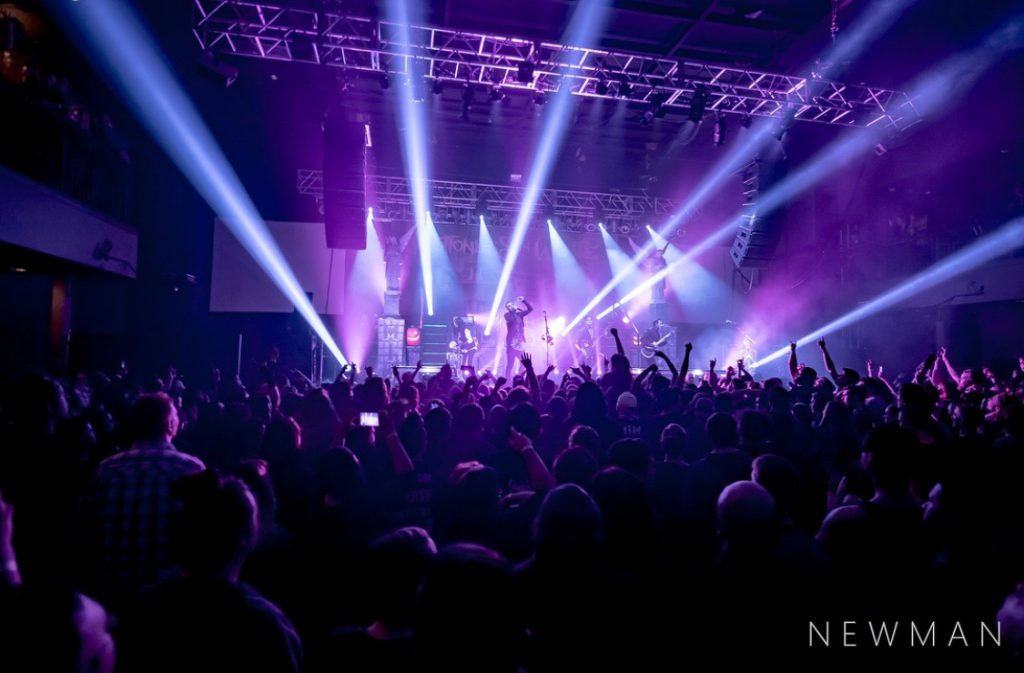 CRANSTON, RI – Setting up for Motionless in White on the recently concluded 2018 leg of the band’s Graveyard Shift tour was anything but “motionless” for lighting director Megan Alksninis of JDI Productions. In the early phase of the 27-city US and Canadian tour, which ran from February 20 to March 25, Alksninis often found herself scrambling to set up in time for the show.

“The first few weeks were challenging in regards to having enough time to make the show look as big as it needed to be,” she said. “We had to move fast to incorporate house rigs and seamlessly blend everything together.”

Alksninis and her team were more than up to meeting this challenge. With help from a floor package featuring CHAUVET Professional fixtures, they were able to set up a big, bold and inspired show that was true to LD Cody James’ design.

Creating this big look was essential to reflecting Motionless in White’s distinctively theatrical and unsettling stage persona, even though most venues on the tour were under 2000 capacity, “This is a very intense, fast-paced heavy metal band, and their lighting package needed to reflect that,” said Alksninis. “Cody James created big positions for the band’s 2017 Graveyard Shift tour. When the tour was extended to this year, that look carried over. Regardless of the venue we appeared at, the lights always seemed to fit the room perfectly to project this sense of drama.”

James’ designed called for six Rogue R2 Wash fixtures to be included in the floor package. Alksninis positioned four of these units on risers behind the band and set the remaining two on the stage deck, one to the left, the other to the right. The RGBW moving washes were used primarily for backlighting and for washing the macabre statues on the stage. 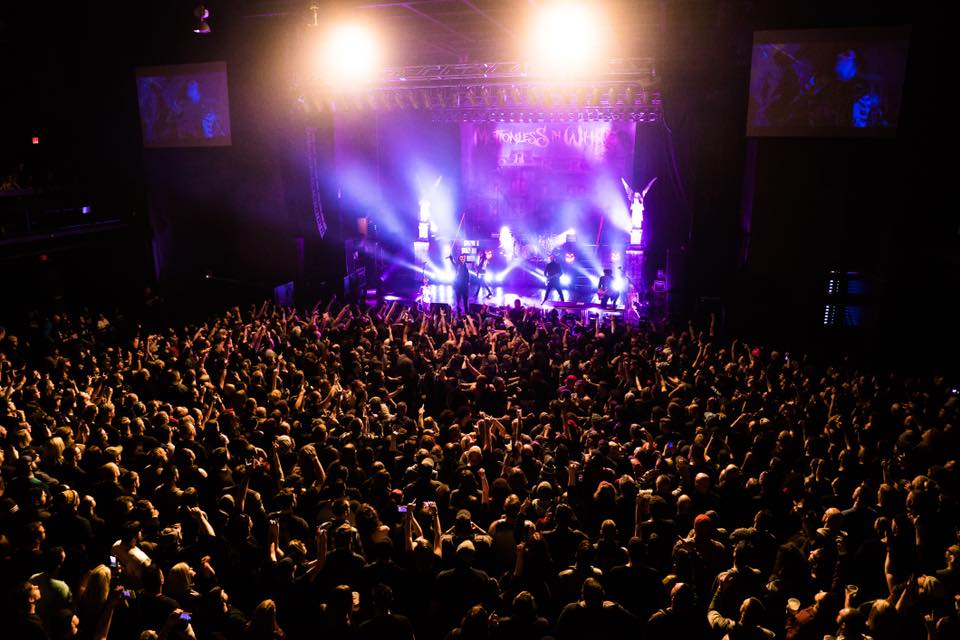 “The backlighting we did with the Rogues was critical to creating the right atmosphere,” said Alksninis. “We got some really nice looks backlighting the drummer and both guitar players with the R2 Washes. Our backlighting gave the stage an eerie feeling. It was important that the audience see the band members’ faces, but there was also magic in going completely black during breakdowns and letting the lights behind the performers facilitate the music.

“Very rarely was the band lit up in a white front wash,” continued Alksninis. “The tour had a Halloween vibe, and the lights needed to match. When we did do front washing, there were a lot of greens and dark blues.”

Although the lightshow supporting the band’s frenetic music was by necessity fast-paced, it did not feature a high level of rapid pan and tilt movements. “I have learned a great deal working with Cody James,” said Alksninis. “The most notable lesson has been not to over-rely on movement. Making lights move is easy, but to make the pace of the show really engaging requires changing things up by executing timing and blending new looks.”

In addition to the Rogue R2 Wash fixtures, the Graveyard Shift tour rig featured a collection of beams, including six Legend 230SR Beam fixtures, four strobes and two CHAUVET DJ Cumulus low fog units. Speaking of the latter product, Alksninis noted, “Low fog is becoming a common thing in the touring world. This is my second tour using low fog and the first with the Cumulus. Being that this was the Graveyard Shift tour, it had to look ominous — and what is spookier at a graveyard then some fog! I would often start the show with the low fog. The machines were extremely powerful, and running them on a low setting for about 30 seconds would give the band a unique atmosphere to walk out into.”

Apparently, a lot of fans appreciated that atmosphere. Alksninis was surprised by the number of people who stopped by FOH at the end of a concert to compliment her on the lightshow. “You always get people asking if they can grab a set list,” she said. “But on this tour, the number of people who came over and told us how much they enjoyed our work really stood out.”

Seeing lighting move people this way makes everything about her job worthwhile, says Alksninis, even the occasional frantic setups.