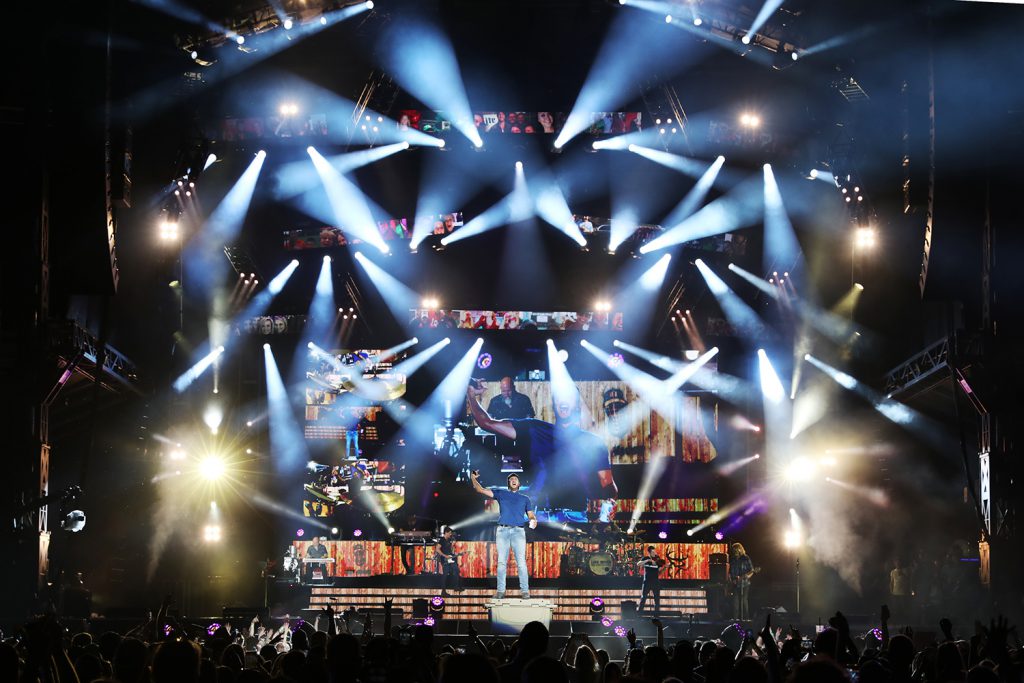 NASHVILLE–  What makes someone country? It certainly doesn’t require living in Nashville, West Texas, Bakersfield or any other traditional hotbed of country music. Superstar Luke Bryan’s current What Makes You Country Tour certainly proves that. With stops at New York’s MetLife Stadium, Chicago’s Wrigley Field, and Dodger Stadium (it will be the first country act to headline there), the tour clearly shows that country music is universal, especially when it’s performed by an artist as gifted and engaging as this multi-platinum CMA Award winner.

The tour, which resumed on May 31 before 40,000 fans at Toronto’s Rogers Centre, features a mix of familiar hits and new material, all done in Bryan’s affable baritone with plenty of movement on stage and artist-audience interaction. Providing a dynamic lighting frame for this free-flowing energetic performance are 100 CHAUVET Professional Maverick MK Pyxis and ÉPIX Strip Tour fixtures, supplied by Elite Multimedia. 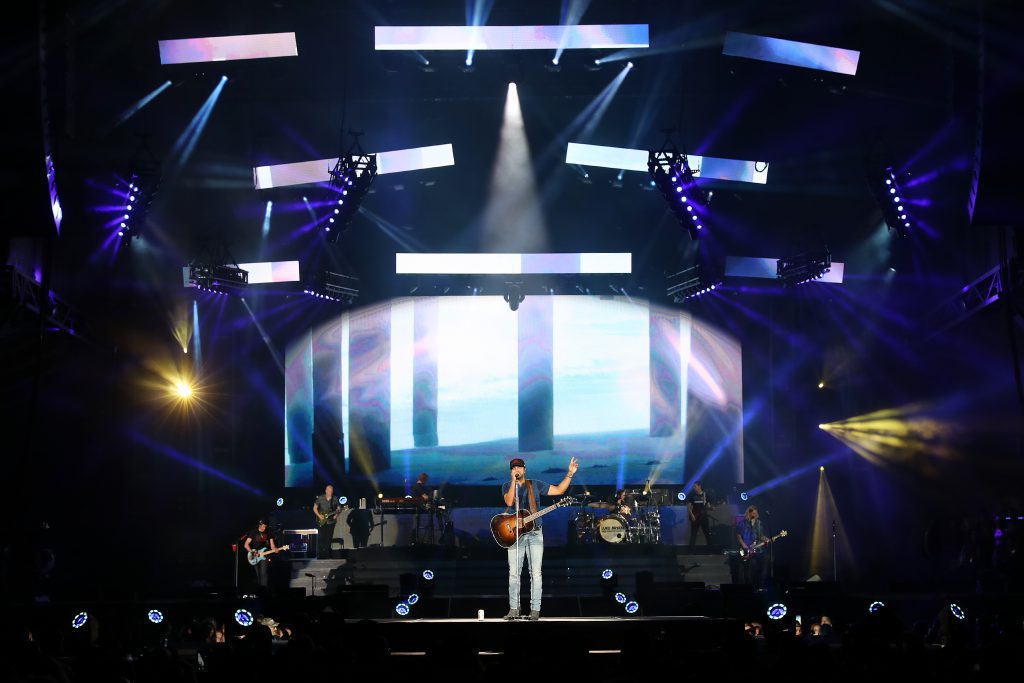 Justin Kitchenman, who has been Luke Bryan’s lighting designer since 2012, is using 20 floor-positioned Maverick MK Pyxis fixtures to line the thrust and B stage, as well as the upstage side of the set behind the band. With their 60W RGBW center beam and ring of nine surrounding 15W RGBW LEDs, the Pyxis fixtures allow Kitchenman to outline key areas of the set with colorful moving light served up in a variety of configurations. This not only helps focus eyes on the stage in large stadiums, it also creates a varying range of fresh visuals throughout the show.

In addition to the Pyxis units, Kitchenman is deploying 80 ÉPIX Strip Tour linear fixtures. The 1-meter RGB units line the truss on stage and are pixel mapped to reflect the changing moods of the music with a variety of looks.

“The ÉPIX strips line both our pods, which are single 10’ truss on SGPS motion control,” said Kitchenman. “We also use them on our upstage ‘light ladders.’  Both of those elements are populated with single cell LED fixtures. The strips and the fixtures are mapped into the video server.  They can all act as independent fixtures or as part of the larger map. This greatly adds to the versatility of our rig. Craig Caserta, who programs the show, and Chris Lighthall, who does media server programming and video mapping, deserve a lot of credit for making this complex and vibrant look happen.” 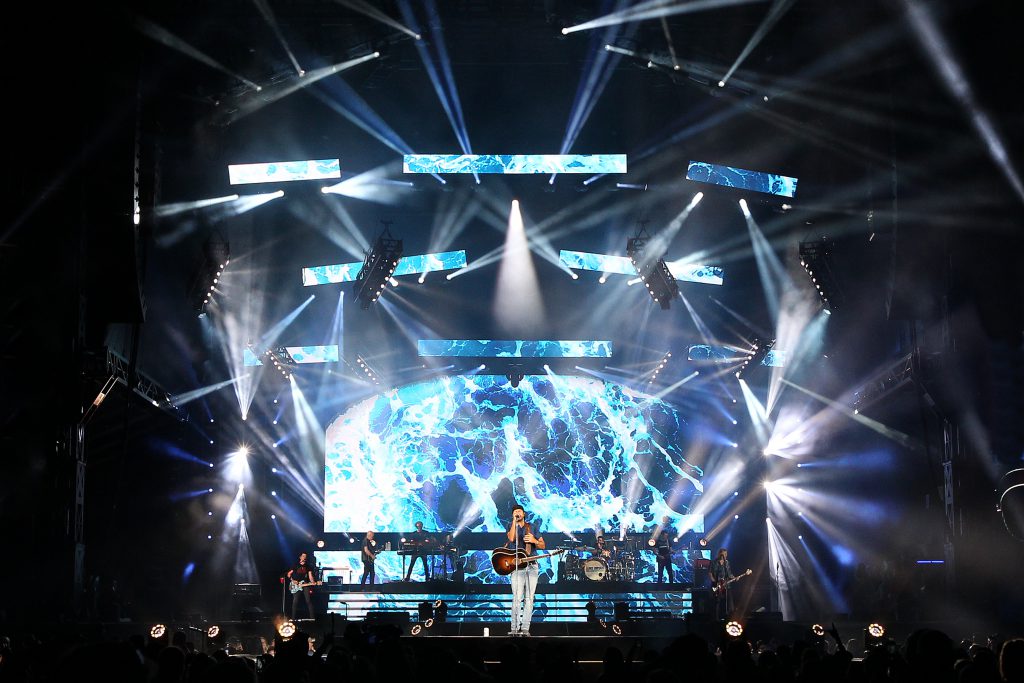 Versatility is extremely important to Kitchenman’s design concept for the tour. “Our goal was to create a design that is both dynamic and flexible,” he explained.  “We want to be able to create a massive rock lighting moment for one song, then drop it down to an intimate, sparsely populated rig for the next number. Being able to have our Pyxis go from an eye candy effect to a soft wash, certainly helped in this regard, as did changing the looks on our ÉPIX Strips.’

Kitchenman credits the Elite Multimedia team with helping him turn his vision for this multi-faceted design into reality. “Tom Wilson and Jason ‘Cannonball’ Jenkins and everyone at Elite have taken this design and turned it into a functional, working system,” he said.  “There are challenges every time you put together a new design, but they were out in front of every obstacle, coming up with solutions long before the problems ever arose.

“Our lighting crew chief Chris Hummel also deserves credit for building an incredibly complex lighting rig that is not only versatile, but also quick and efficient to load in and out,” continued Kitchenman. “His team of Billy Willingham, Derek ‘Magnum’ LeFrance, Kurt Rentchler, Robert ‘Robot’ Harrison, Sean ‘Spot 8’ Wykoski and Dave Meyer are also the unsung heroes of the tour. I have been designing for Luke for seven years now, and our shows become deeper and more complex with each tour. So, it’s been a great ride – and we still have a long way to go!”