NASHVILLE – Like many passengers on the flight from Nashville to New York, Landon Bloss donned headphones soon after takeoff. He wasn’t listening purely for pleasure though. Instead, he was taking a crash course in the music of Billy Currington. Like just about everyone in Nashville, Bloss was familiar with the CMT Award winning baritone’s sound (you don’t amass a dozen No. 1 hits without touching a lot of lives), but he had another, more urgent, reason for his intense interest in the star’s extensive body of work.

“I was on a load out when I received a call from Gene Jung, Billy’s PM, saying that they needed a LD to fly out the next day to start running his show immediately,” recalled Bloss. “They booked me a flight and off I went. Of course, I knew Billy’s music, but I really wanted to get deep into it, so on went my headphones.”

Bloss proved to be a quick study. Taking over the rig originally designed by Ian Saunders, he supported Currington’s 90 minute set on the star’s “Stay Up Til Sun “Tour with an intense, fast-moving lightshow that showered a rainbow of colors on the stage. Helping him in this endeavor was a collection of Rogue R2 Wash fixtures supplied by 4Wall Nashville.

“The overriding thing on this tour was to be versatile, so we could cover the diverse range of Billy’s music,” said Bloss. “Ian did an excellent job designing a flexible rig, so I was starting off at a very good place. This rig was built around movers, which made it very adaptable. As far as the general look of the show was concerned, we wanted something that was powerful, but also easy to look at, so nothing too bright or overwhelming. The focus remained on Billy, his music, and his rapport with the audience.”

Featuring six truss fingers that splayed over the width of the stage, the design not only covered a wide area, it also afforded a lot of opportunities to change up the looks of the show by emphasizing different sections of the set. The Rogue R2 Wash fixtures were hung two apiece on each of the truss fingers.

“I had used CHAUVET Professional Mavericks before and was impressed with their output,” said Bloss. “On this tour, the Rogues impressed me too. They did an amazing job at being multi-faceted, which helped a lot on this tour. They excelled as a wash for painting color on the band members. They also looked great when zoomed in for some tight beam looks – and the pixel rings created some astonishing eye candy. As I said, we wanted to create excitement while still being subtle, so a dynamic wash effect like this was perfect.”

The “Stay Up Til Sun” Tour stopped at a wide variety of venues during its seven month run. Thanks to its flexibility, the touring rig was able to adapt to them all. “We had A, B, and C rigs,” said Bloss. “Our A rig had 14 motors and 8 sticks of truss. The B rig fit on a standard festival stage and lost two sticks of truss. The C rig was ground stacked on base plates. The fixtures gave us big looks regardless of which design we used.”

Looking back on his experience in November, a month after the tour ended, Bloss still marvels at his sudden start. “It was quite an experience, jumping into this tour and having to learn the music, programming, and rig within 48 hours of the first show,” he recalls.

That first show went off without a hitch. So too did some 60 other shows on the tour. It called to mind, Currington’s first chart-topping hit, “Must Be Doin’ Something Right,” a title that also pretty well sums up the work of his entire crew (including its surprise LD) on this long tour. 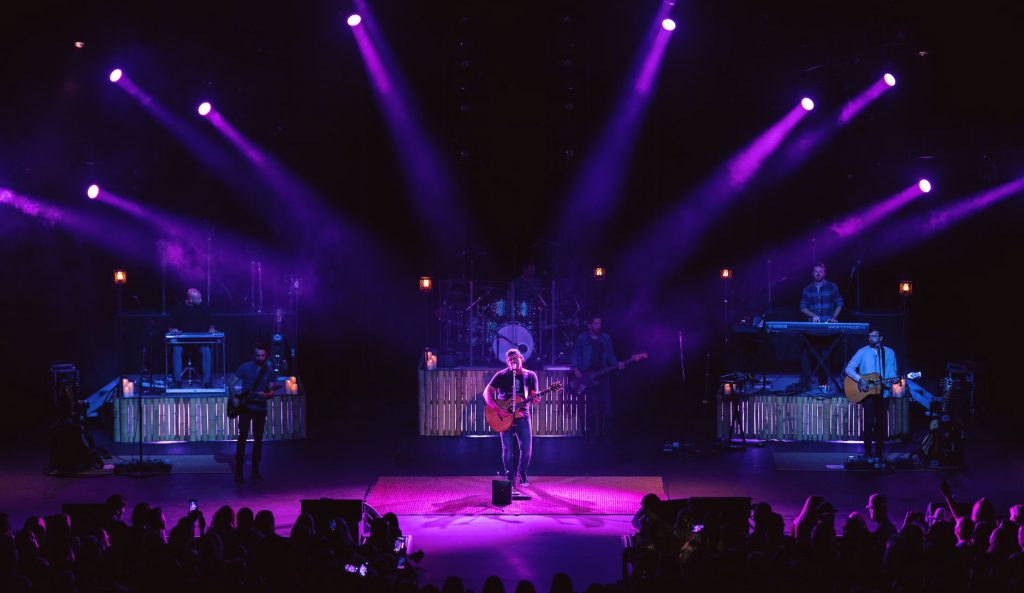