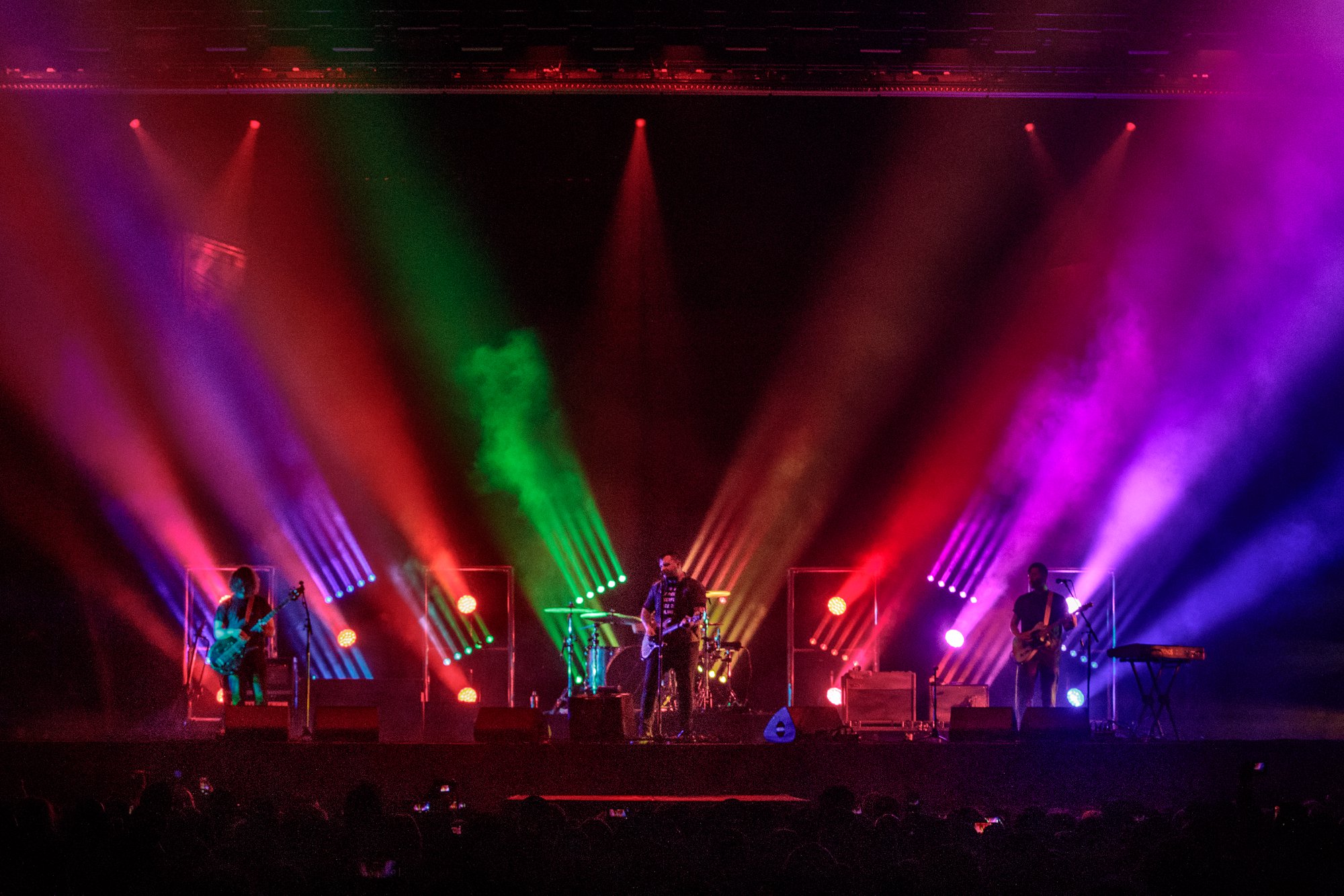 PHILADELPHIA – Like some shape-shifting force of nature, California-based Thrice seems to move effortlessly in multiple musical directions at once, weaving elements of punk, alternative, hardcore, and even indie rock into their passion-driven and beautifully balanced sound. This virtuosity has earned the quartet an ever-expanding following, so it came as no surprise when they were tapped to provide direct support for Bring Me The Horizon on the US leg of the Grammy-nominated UK band’s First Love tour, which ended in February.

The tour, which stopped at larger live music venues and small arenas, allowed Thrice to reach more music fans. At the same time, though, it also raised some issues for the band’s lighting designer Lenny Sasso, who had to contend with short breakdown times . He was able to meet this challenge and create a dynamic, multi-faceted lightshow worthy of his client’s diverse music by drawing on the compact size and versatility of CHAUVET Professional Rogue R1 FX-B and Rogue R2 Wash fixtures, supplied by Squeek Lights.

“Being on this tour was a great experience, but I had to make adjustments since we were a direct support act,” said Sasso. “I had to make sure my rig rolled on and off seamlessly and fast, so having things set up on carts that Squeek provided was a lifesaver. I created a loom that had connections directly at the back of each cart. As soon as the set was over, stagehands were able to just break the connection at the cart and roll it right off stage. It worked out perfectly. Also, the luxury of having half my fixtures pre-rigged was great.” 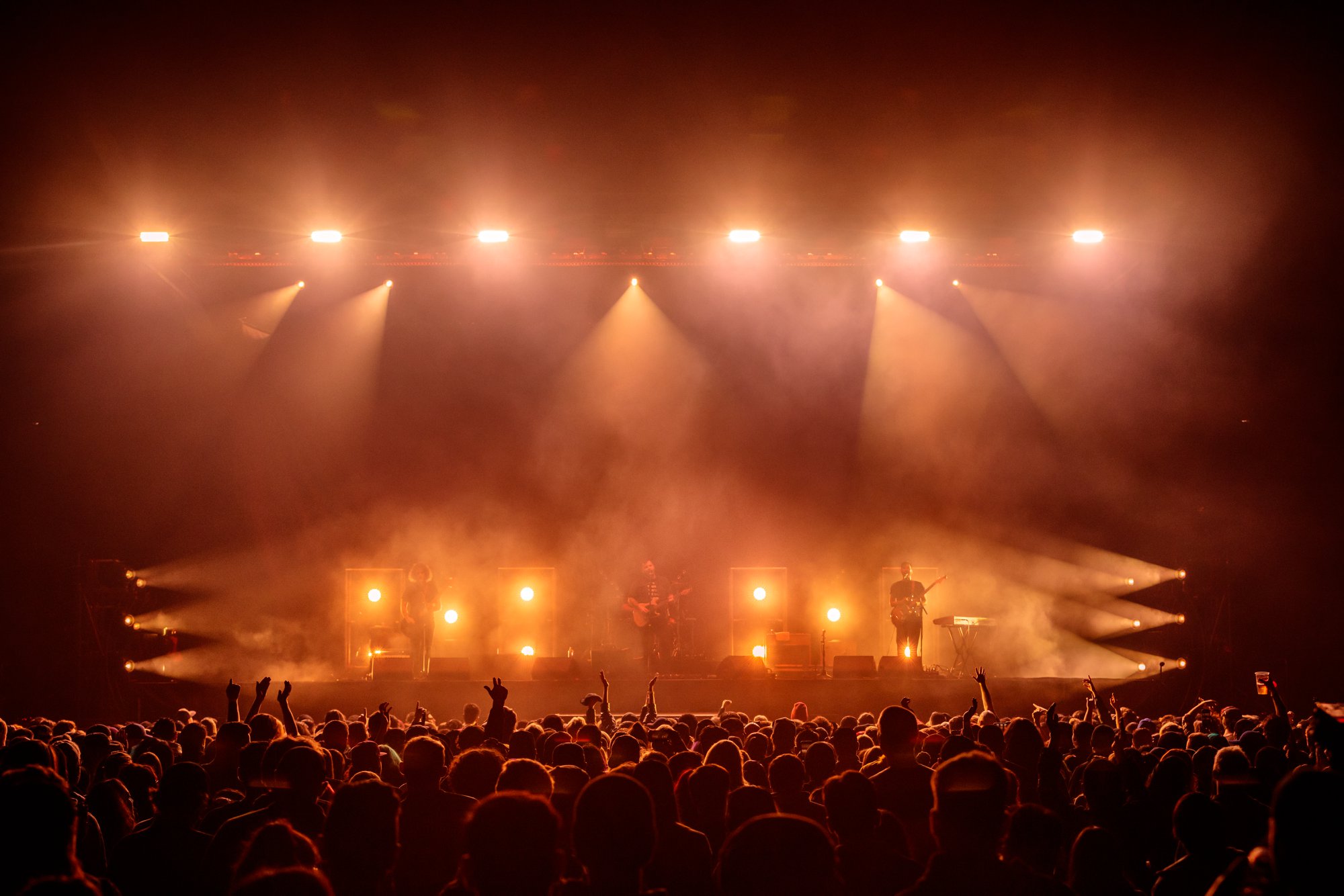 It wasn’t just the cart arrangement that aided Sasso in dealing with the exigencies of the tour. The fixtures on those carts also played a key role in helping him achieve his design goals. “So, my reasoning for using the Rogue R1 FX-B and Rogue R2 Wash was that they take up relatively little space and do a lot of different things,” he said. “This made them great for carts.”

“Plus, with this being an arena tour, my choice of fixtures was limited by what the headliner could allow me to use from their rig,” continued Sasso. “This left me with no wash fixtures whatsoever. So I opted to use the R2s to fill out that space. I went with the FX-Bs, because I wanted something a little more unique and flashy than another profile — especially since I already had profiles from the main act’s rig.”

Sasso included 12 Rogue R1 FX-B fixtures and 10 Rogue R2 Washes in his rig. Most of these fixtures were arranged on four rolling carts, two on either side of the drum riser. Each cart had one R1 FX-B unit and two R2 Washes. An additional R2 Wash fixture and two R1 FX-B units were positioned between two carts. There were also four R1 FX-B fixtures over the drum riser in the middle of this configuration. All fixtures were staggered at different heights. 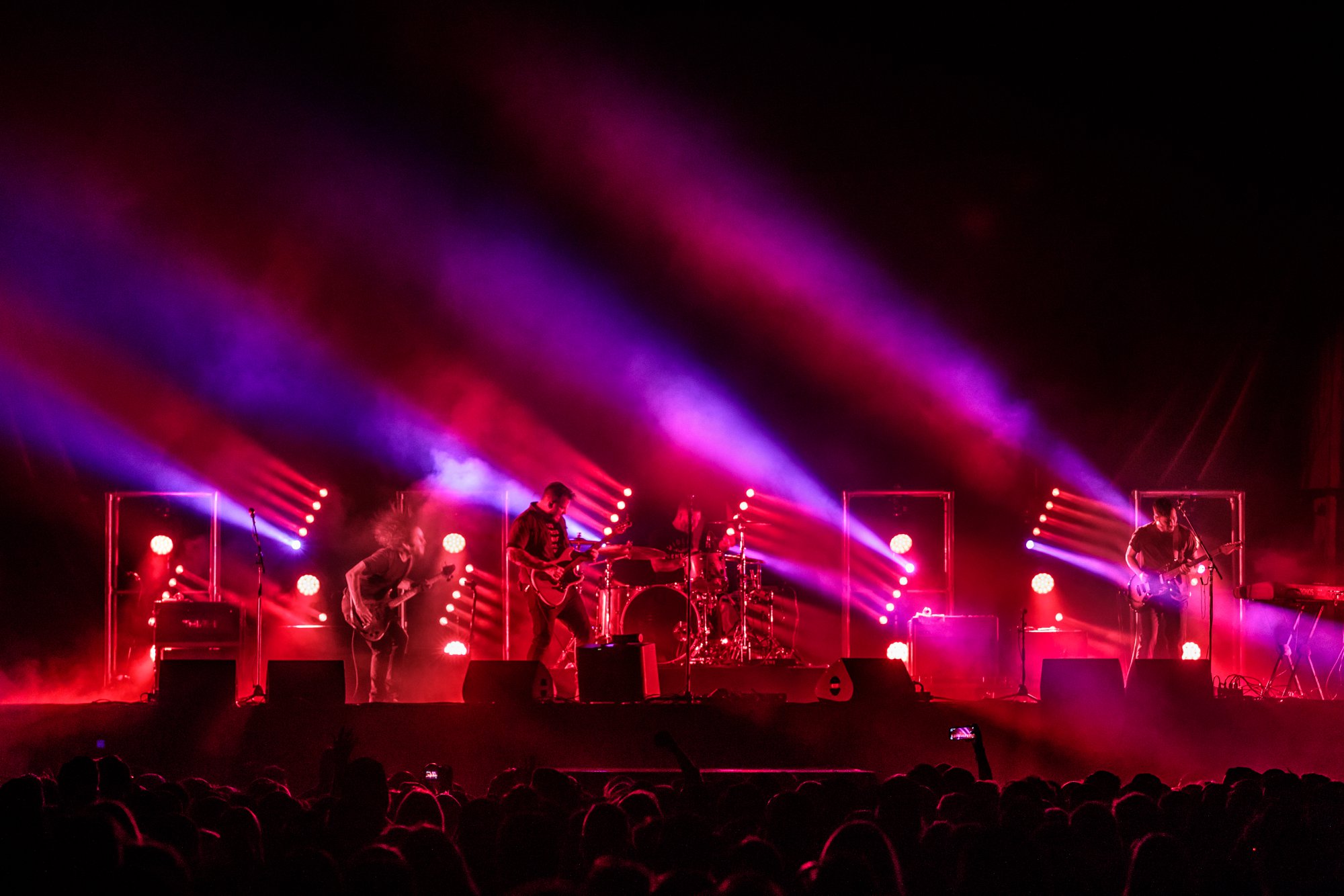 “I always tend to stagger my fixtures, because I feel this gives me better depth than having just an even line of the same fixture,” said Sasso. “The way I mounted the R2 Washes in the carts made it easier and faster for me to program, which is why the carts ended up with two R2 Washes, while the poles splitting the carts just got one. The top R2s in the carts were under hung from the cart, and the bottom R2s were bolted to the base of the cart. The R2s on the poles were side hung.”

Drawing on the versatility of this fixture arrangement, Sasso unleashed flood of deep, evocative looks, creating 20-40 cues per song and occasionally punting in strobe and white flash hits.

Adding to the depth of the design was Sasso’s use of the Rogue R1 FX-B to send multi-colored diagonal beams of light in shifting directions. “I really experimented with several ways of grouping colors and splitting the FX-B beams on this tour, because I felt this fit Thrice’s music,” he said. “I programmed the entire show at home and was lucky enough to find a really good FX-B model. I got to spend a pretty good amount of time dialing in these color effects chases. At times I grabbed every FX-B and had them pan over in the same direction during some exaggerated guitar slides. This gave a cool diving effect. When I would pan the FX-Bs in opposite directions, I could do seamless pixel chases through the fixtures.” 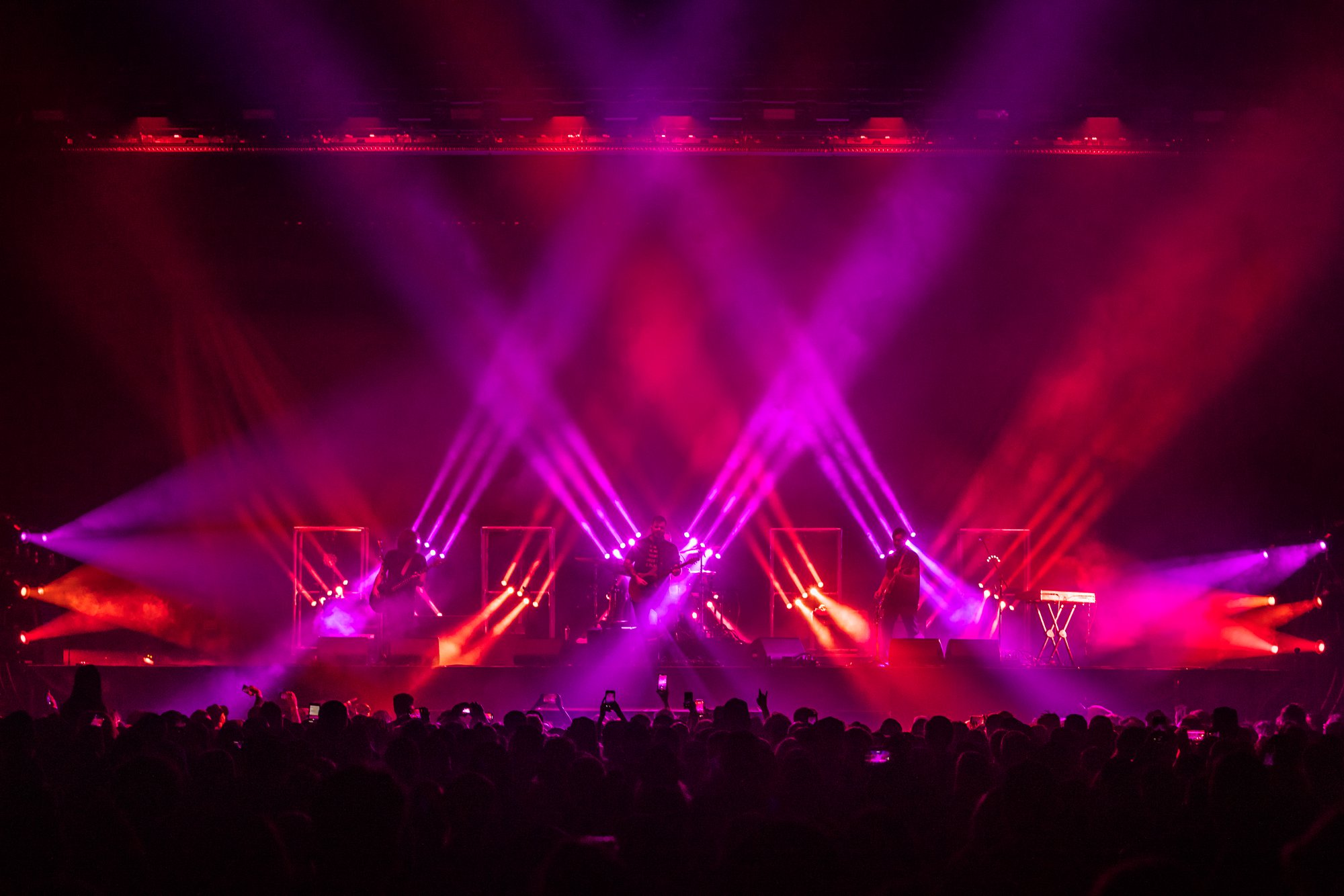 Sasso also accented the music by saturating the entire stage in monochromatic colors. “Thrice is an extremely dynamic band,” he said. “There were definitely moments when they would do something like launch into a very heavy bridge after a super mellow verse or chorus. At those points, I would just plunge the whole band into a single color, like maybe a dark red, while accenting the drum hits with white flashes. This just kind of helped drive home the texture flip that the band had created.”

Sasso was inspired by Bring Me The Horizon’s lighting designer Sam Tozer when working on the First Love tour. “He really set the bar high on this tour and shared a lot of insights, which definitely pushed me to up my game on this run,” said Sasso. “I wanted the show to look super creepy and dark and very, very wide. The majority of this run was in smaller arenas, so I knew I had to create looks to fill the entire space.”

However, Sasso did more than simply “fill space.” He also made it come alive with a carefully planned show that got a lot of big looks out of a relatively small rolling cart rig. 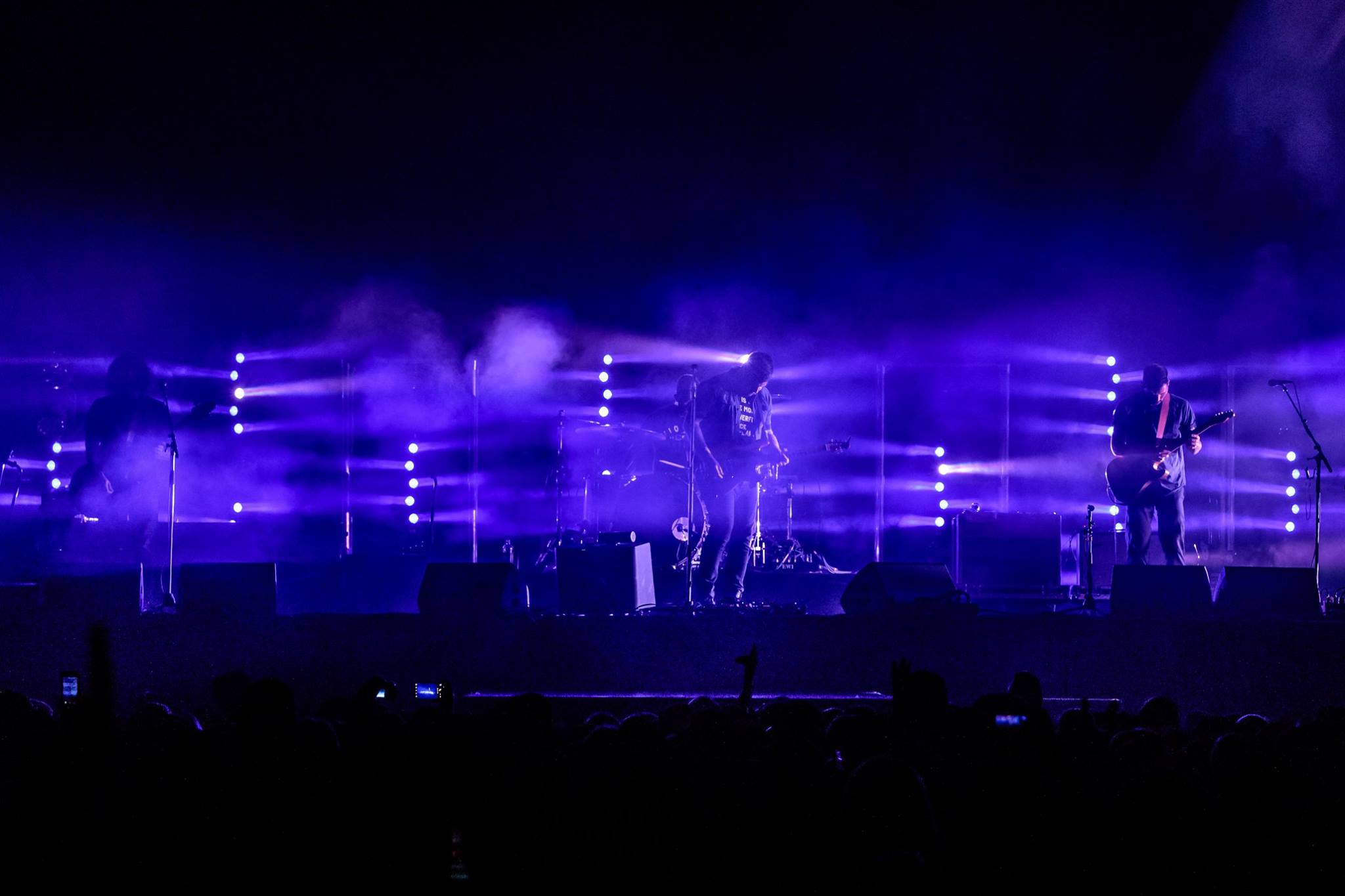