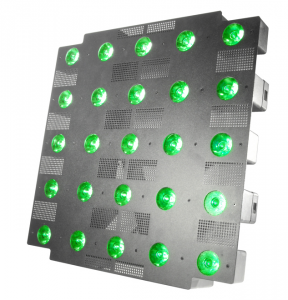 INDIO, CA – Norwegians Ketil Jansen and Ulrik Denizou Lund, better known as Lemaitre can be considered a two-man melting pot of music. In the tradition of bands like Phoenix and Daft Punk, the red hot duo effortlessly blends dance, indie, pop and even heavy swing brass into a fast smooth electro tinged sound that’s all their own. Their most recent release “Closer” already has 12 million streams.

Expectations were high when Lemaitre performed at this year’s Coachella festival, and the pair didn’t disappoint, blending their eclectic sounds with a mesmerizing lightshow created by LD Michael Sheck of L7 Productions. A key component of Sheck’s show was the sizzling pixel mapped eye candy served up on CHAUVET Professional Nexus Aq 5×5 LED panels supplied and installed by Kilroys Lighting and Production of Las Vegas.

The RGBW Nexus units were rolled out quickly on the Gobi Tent stage as part of the Lemaitre floor package. “We put everything in the package up in 15 minutes,” said Matt Smyrnos of Kilroys, who served as production manager for the show. “Everything was built and programmed in advance, bolted on to a steel rail and then rolled onto the sage.  Fortunately, the Nexus panels were very easy to handle.”

Smyrnos and his team positioned 23 of the Nexus panels on the Gobi stage. Most of these panels, were on three artist platforms measuring five panels each. The remaining eight panels were arranged in diamond configurations on two vertical truss towers. This multi-level configuration added an extra dimension to the stage for the Lemaitre performance. With a brightness of 11,350 lux at 5 meters, the panels were also bold enough to serve as a unifying element for the entire rig.

For eye candy, the Nexus Aq 5×5 panels displayed a variety of pixel mapped images created expressly for Lemaitre’s Coachella appearance. “We used a grandMA for triggering time code and a Resolume video processor to feed the panels images,” said Smyrnos. “The Nexus units performed flawlessly throughout, displaying the images and creating a high level of audience engagement.”

In addition to the Nexus Aq 5×5, Kilroys Lighting and Production included Q-Wash 560Z-LED washes as well as beams and spots in the Lemaitre floor package. “We had these fixtures there for brightness and color,” said Smyrnos, “but for eye candy — it was created almost entirely by the Nexus.”