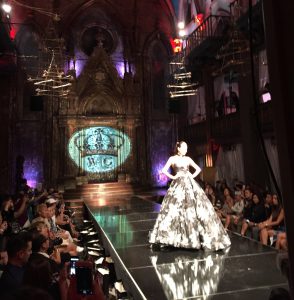 NEW YORK – Pink is the most “in” color. Straw baskets are one of the hottest accessories. Pants are getting higher. New York Fashion Week can always be counted on to make some clear trend declarations. Happily, the one thing that always seems to be in style during this week-long (actually nine-day) celebration of haute couture creations is its commitment to helping good causes.

Along with all of the glittering debuts by big name designers, New York Fashion Week is a time of high-profile charity events. Among the most popular with celebrities and the press alike is the Hearts Fashion Gala, which raises money for the AIDS Healthcare Foundation. Produced by Eric Rosette of Rosette Management, the three-day event showcased the work of 20 celebrated designers like Hale Bob, Sanja Bobar and Gregorio Sanchez on a runway that LD Dougie Lazer illuminated with Ovation and Rogue fixtures from CHAUVET Professional.

“The setting that this event took place in is very evocative and unique,” said Lazer of DNA Illuminations. “I wanted to bring out its natural beauty while still highlighting the models and the fashion statements on stage. The Chauvet fixtures helped me do this by giving me intense even fields of light with great throw distances that were extremely easy to focus tightly.”

Contributing to the captivating setting at the Heart Fashion Gala is the event’s venue, The Angel Orensanz Center. Constructed in 1849, the ornate neo-Gothic building on Manhattan’s Lower East Side is named after sculptor Angel Orensanz. Fittingly, being that its moniker honors a sculptor, its interior was modeled after Michelangelo’s Sistine Chapel in Rome. For years, the building served as a prominent Jewish synagogue before it fell into disrepair and was later reopened as a popular New York event venue.

The unique history of the building evokes powerful emotions. However, it also presented a challenge to Lazer when lighting the Heart Fashion Gala show/fundraiser. “Because the building is in an old synagogue, there were no hanging points in the room,” he said. “As a result, we had to improvise and use the architectural features that were available to find points that we could use to position our lights. Fortunately, our Ovation ellipsoidals had a good throw distance when used as key lights.”

Lazer used 24 Ovation E-190WW 190-watt LED ellipsoidals with 26° lenses as his key lights for the runway. Flying the Ovation fixtures from different positions on either side of the runway, he was able to adjust beam angles to get an even coverage of the platform area without spilling over into the audience.

In addition to the Ovation ellipsoidals, Lazer’s rig included four Rogue R2 Spot 240-watt LED moving spot fixtures. Using the Rogue’s split colors and morphing between its two gobo wheels, he was able to create continuously changing looks on the stage at the base of the runway as well as on the runway itself at key moments in the event. Mounted on truss towers, the Rogue fixtures also created aerial effects.

Running his rig on a ChamSys MagicQ 100 controller, he initially tried to run his rig wirelessly. “We wanted to do everything wirelessly, but there was too much feedback, given that we were in a very busy New York City neighborhood,” he said. “So we ran wires. In any case, the show came off beautifully. Working in this building was a bit of a challenge, but in the end it really contributed to the look we created.”