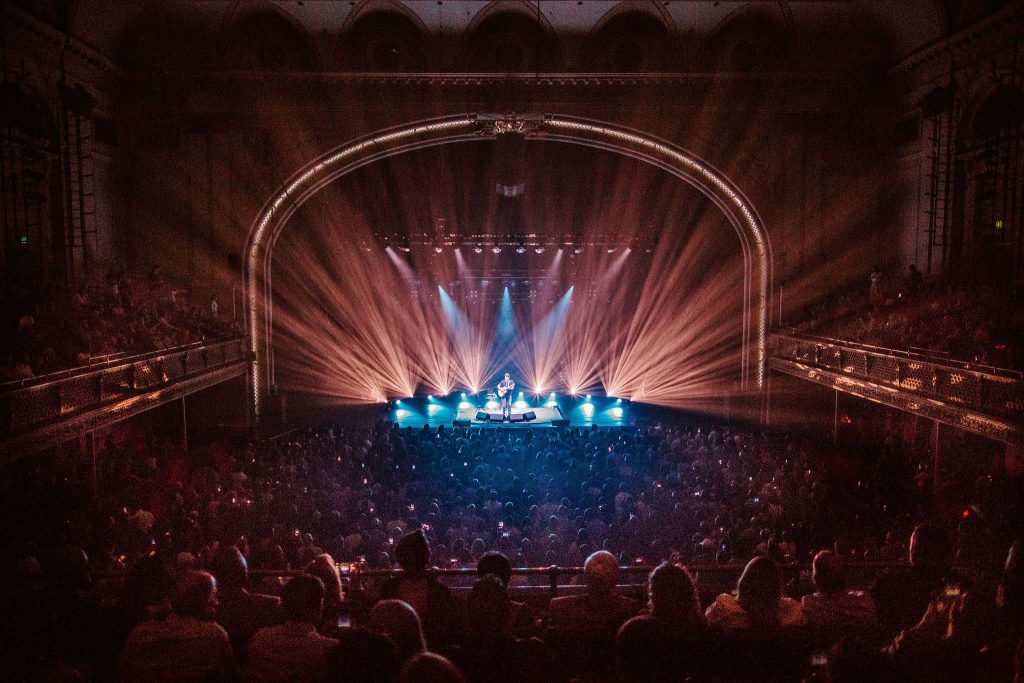 BALTIMORE – How do you create big looks for a seven-time Grammy winner, while still conveying an evocative sense of intimacy in a 2600-seat venue? Aaron Kovelman faced this challenge on Sunday, October 7 when he lit John Mayer’s acoustic solo performance at One Night, One Show, One Cause, a benefit for the Johns Hopkins Kimmel Cancer Center sponsored by PRS Guitars. Kovelman was more than up to the task, creating a lightshow that was at once warm and inviting, while also offering some high-impact moments to support the superstar’s music.

Helping him in this endeavor was a collection of CHAUVET Professional Rogue and STRIKE fixtures supplied by Showtime Sound LLC, which also handled audio for the fundraiser at Baltimore’s Modell Performing Arts Center. Kovelman had 24 Rogue R2 Wash fixtures in his rig, deploying eight of them on the floor, 12 on the upstage truss and four on the downstage truss. He also used eight STRIKE 4 multi-formatted fixtures, hanging them in equal numbers on the upstage and downstage truss.

Working with the profile and hybrid units that were also in the rig, the CHAUVET Professional fixtures gave Kovelman and LX Tech Zach Bunner the flexibility to blend soft supportive light with punchier looks. “This was an interesting challenge for me to tackle as far as having to achieve intimacy for a very high-profile artist,” said Kovelman. “I wanted to provide a big look because it was John Mayer, but I still wanted to make it feel intimate because it was a solo-acoustic event. On top of that, I wanted a heavy ground package so I could have as many angles as possible to light John, as well as the opening act Matt Scannell, without making them feel too crowded on stage.”

Kovelman’s choice of color palettes was essential to creating the engaging mood he was seeking. “Since it was a very ‘soft’ evening as far as the music and mood were concerned, I used mostly blue-based palettes throughout the night, and kept things gentle on the audience eyes,” he said. “I was glad to have the R2s in my rig, because they have an awesome color-mixing engine that gives a super clean look within any part of the spectrum. For their size, they are very bright, and provide plenty of coverage and dynamics within their zoom range. This helped me when it came to creating the big looks that I wanted for John.”

The eight Rogue R2 Wash units that Kovelman arranged across the stage deck also contributed to the laid-back atmosphere. Aiming the RGBW moving fixtures at the center-stage floor, he surrounded Mayer with a blanket of soft light.

Accenting this mood, he also downlit the artist with wash light from the 12 Rogue R2 Wash units on the downstage truss. These washes were done with either colored or white light, depending on the song; regardless, they created a transformative glow around the acoustic solo performances.

“Since it was an intimate show, I wanted to try to keep the focus within the artist performing space,” explained Kovelman. “Having the face of the R2 Wash be right there, while the wash light was focused down on the deck, added a nice surround element to John’s performance area.”

Also contributing to the mood inside the concert hall was the warm white glow from the eight overhead STRIKE 4 fixtures. Kovelman used them as “gentle crowd washes,” making the audience more visible to Mayer and strengthening the connection between them.

“This was a very emotional event in support of a great cause,” said Kovelman. “Our goal was to walk the line between contributing to the good feelings with our lighting, while also supporting the show with some concert looks.”

As anyone who attended the benefit concert on that October Sunday night would agree, it’s a line that Kovelman and the Showtime Sound LLC team walked very, very well. 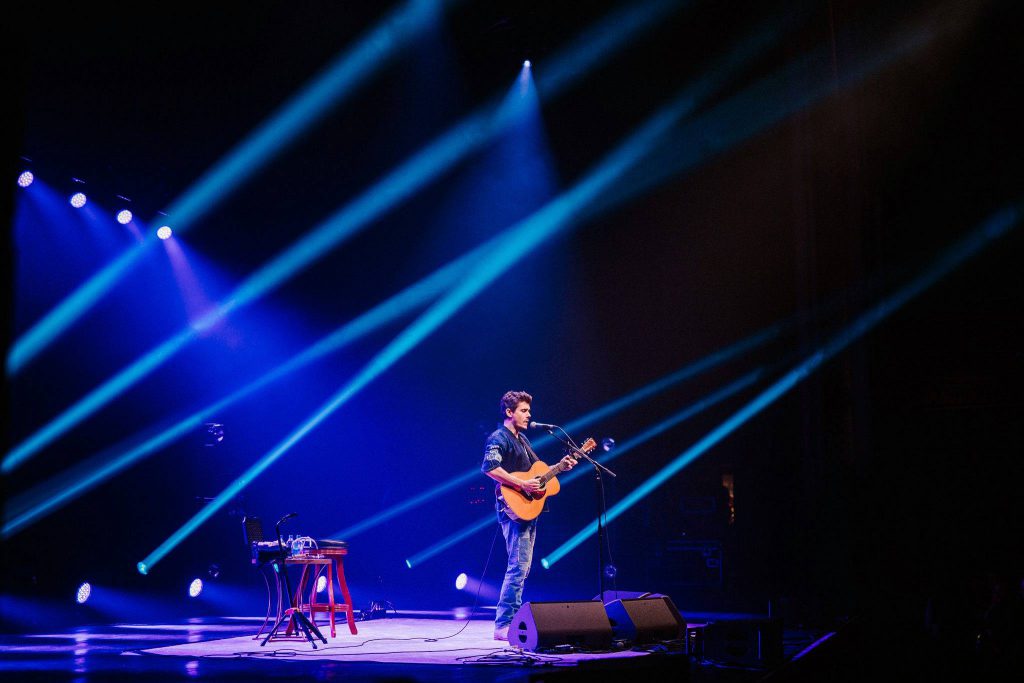