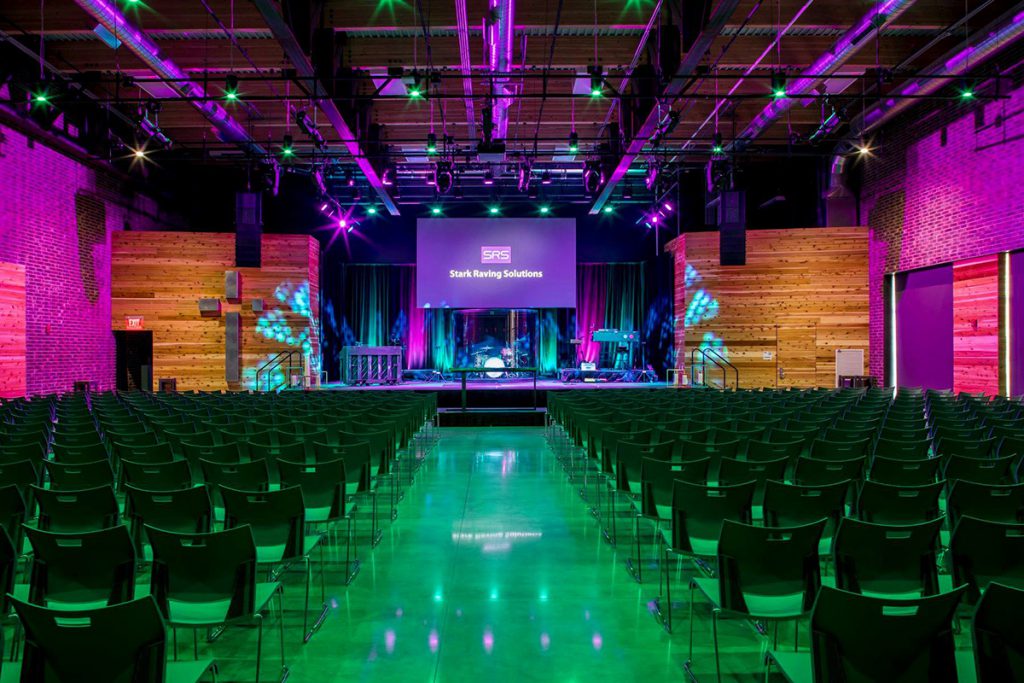 KANSAS CITY, MO – From the waterfront in Portland, Maine to the West End in Portland, Oregon, America’s downtown districts are experiencing a revitalization boom. One of the most inspiring signs of this renewal can be found at 1601 Grand Boulevard in the heart of Kansas City, where the Church of the Resurrection – Downtown held its inaugural service on June 2, making it the first new house of worship to open in Missouri’s largest city in over 80 years.

A state-of-the-art $10.2 million structure, the new 450-seat church has a flexible LED stage lighting system that helps it meet the diverse needs of its community. Designed and installed by Stark Raving Solutions, the lighting rig features a broad collection of CHAUVET Professional fixtures.

“The Church of the Resurrection – Downtown was founded in 1990 and is based in the suburb of Leawood, Kansas, but it had been looking to open a satellite campus downtown since 2007,” said David Sisney of Stark Raving Solutions. “There were four great churches in the downtown area, and they had been there for a very long time. Resurrection Downtown was occupying a former bar, which was too small, given its growth rate. It was felt that a new church building could have a positive impact on the community, especially if its focus was on service to the people of the area.”

Toward this end, the church has partnered with many community agencies and local schools and connected countless people with one another for life-giving support. From its humble beginning in 2009 with nine people, Resurrection Downtown had grown to serve over 1200 people in average worship attendance across four service times each weekend, prior to opening its new campus.

As it does in every project, Stark Raving Solutions approached its design for the church’s new downtown building with the idea of putting people over technology. “Ultimately the technology disappears and congregants are able to experience a transformational opportunity without really thinking about that technology,” said Sisney. “In terms of the lighting system, this meant creating a complete and flexible theatrical lighting system capable of handling any kind of event, from worship, to meetings, to complete concerts.”

For stage washing, Stark Raving Solutions relied on 22 COLORado 1 Solo and eight Ovation E-910FC fixtures. Hung on three stage electrics and two side positions, the COLORado units serve as the primary stage wash fixtures. There are also eight Ovation E-910FC ellipsoidals on the rig. These fixtures are hung on two downstage electrics a used for front washing and spotlighting.

Uplighting of the upstage drapery is provided by eight COLORdash Par-Quad 7 fixtures. Accent lighting on the stage and throughout the entire room is provided by four Rogue RH1 Hybrid and an equal number of Rogue R2 Wash fixtures.

“We have four Rogue Wash fixtures positioned over the stage and four Rogue Hybrid fixtures on our first house electric,” said Kenny Decoursey, Tech Arts and Facilities Director of the church. “Both fixture groups give us the ability to create special lighting looks, texture, and movement that enhance the worship experience and complement the various architectural elements of the room.”

The Rogue units also provide the church with an added degree of flexibility, a critically important feature, given is mission to serve its community in a variety of ways. “Installing moving fixtures in the church not only brings a heightened level of production to our services, but they also provide nearly unlimited flexibility in how, what, and where we direct light,” said Decoursey. “In a room that is used for a variety of events and not just one purpose, flexibility is key and moving fixtures are what provide that with fewer fixtures.”

Church of the Resurrection – Downtown is already making good use of its versatile lighting system as it serves its community in a variety of ways. Response to the church’s services and outreach programs has been overwhelming. It’s been a long time since downtown Kansas City has had a new church, but for worshippers here it’s been well worth the wait. 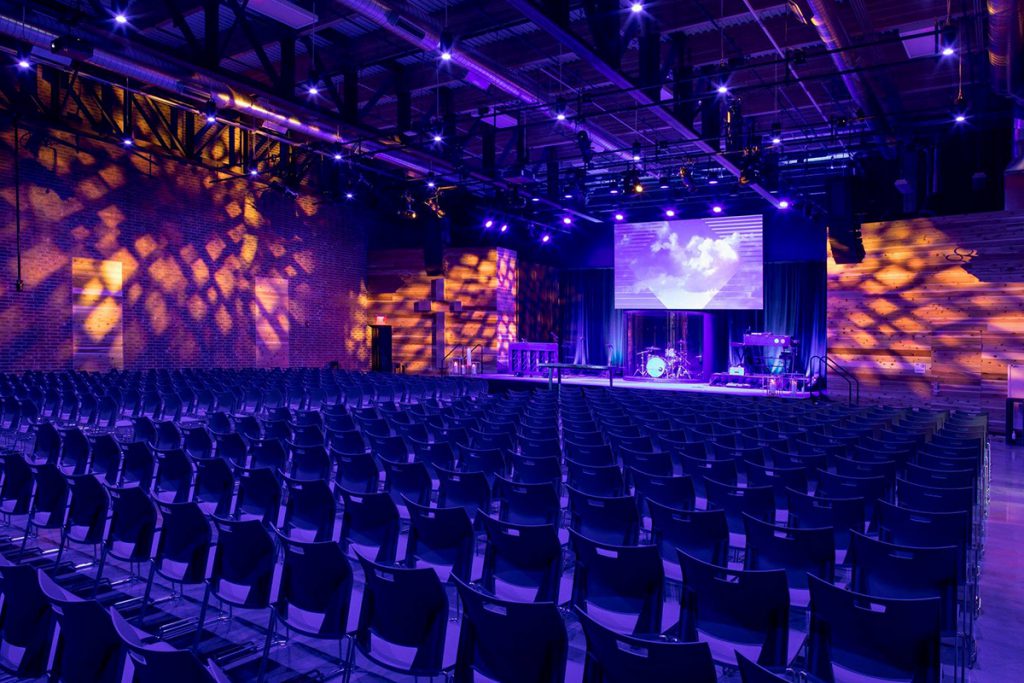