LIVE OAK, FL – A procession of over two dozen bands performed on stage at the 9th annual Purple Hatters Ball in mid-June, but this three-day festival has never really been just about the music. Set in a pastoral region of north Florida, and offering sessions in yoga, healing arts and meditation, Purple Hatters is as much about raising consciousness as it is about pleasing the ear buds. This year’s event had an appropriately expansive lightshow, thanks in part to the addition of the Rogue R1 FX-B LED fixture from CHAUVET Professional.

Lighting designer John Hollingshead used 12 of the new Rogue fixtures, supplied by The Design Oasis, to create big, sweeping, transformative looks on stage that belied the relatively small size of his rig. The five independently controlled 3-watt RGB LED moving heads in each Rogue fixture, along with some extremely fast pan and tilt movements, helped him accomplish this feat. 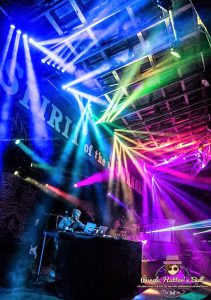 “I became a huge fan of the Rogue R1 FX-B working with it for this festival,” said Hollingshead. “The endless variety of patterns it delivered, its brightness, its rich colors all combined to make it look like there were five times as many fixtures up there than there actually were. The endless variety of patterns just swept people up and captured the spirit of the festival.”

Flying his dozen Rogue R1 FX-Bs in a straight line on mid-stage truss with about 1’ separating each unit, Hollingshead arranged the fixtures at a different angles in a zig-zag stitching pattern. Drawing on the pan and tilt speed of the fixtures, while controlling the moving heads in each unit individually, he was able to create an array of mesmerizing pan and tilt patterns. At times he swept the stage with crossing shafts of light, while at other points he would use the Rogues for audience lighting and aerial effects, drawing on their 7° beam angle.

The flexibility of Hollingshead’s rig to create an array of captivating looks wasn’t lost on visiting lighting designers. Daniel Hiudt, designer for the popular electronica band Papadosio, was among the visitors who were impressed by the tools that Hollingshead had laid out for them.

“I truly enjoyed working with this rig,” said Hiudt. “Since the Rogues were hung mid-stage in a straight line, I was able to use them in a couple different ways. Being able to control each individual diode’s tilt independently was great for creating new and different spread looks that I’ve never had in my show before. Also to incorporate that function into my movements added a dimension to my show that made it seem like there were way more fixtures on stage then I really had. The brightness of each diode made all my chasing look really unique and different. It was really cool to see each diode punch on its own and stand up to the rest of the rig. It was a discovery!”

New possibilities and expanded horizons have always been at the heart of the Purple Hatters Ball, both in terms of musical awareness and spiritual well-being. In 2016, the same spirit of discovery applied to lighting rig too.