Overly complicated fixtures rarely find their way into a Travis Shirley rig. By his own admission, this Houston-based designer’s lights of choice are usually “meat and potatoes.” Admittedly, this may come as a surprise to anyone who’s seen the stunning looks he’s created for longtime client Enrique Iglesias on the singer’s current world tour with Pitbull, or his seminal designs for Linkin Park, Keith Urban and Smashing Pumpkins.

The power of Shirley’s work though comes not from its complexity, but from its harmony. Seldom is there a light, video panel, scenic backdrop or single stick of truss on a Shirley rig that isn’t visually connected to the set design as a whole. Trussing isn’t just something to use for holding lights, and the space over the stage isn’t merely for flying fixtures. In Shirley’s world, both are part of a broader, harmonious design fabric that’s far more impactful than the sum of its parts.

Shirley, who’s applied this design philosophy to lighting tours by a range of artists, as well as festivals like Lollapalooza and music videos for clients like Brittney Spears, talked to us about creating visual harmony — and the power it brings.

We’ve always been impressed by how you incorporate the area over the stage into your design. For example, in the work you did on Sam Hunt’s 15 in a 30 tour, you treated the overhead space as an area to be seen in its own right as part of the design, rather than just using it as a space for flying fixtures. What kind of contribution do you expect overhead lighting to make to your overall design?
“This expectation varies depending on the design. How I use the space overhead and what I utilize in that space can change drastically depending on the specific tour and the character of my design. I’ve always been a big fan of tackling the entire Production design as a whole. Very rarely, will you see a set piece in one of my designs that’s not visually connected to another lighting or video element. The lighting/truss layout is a part of the set design, the same as video screens – as well as the physical set and all of the other elements that are in any given tour. For Sam Hunt’s 15 IN A 30 tour, the video screens and lighting trusses acted as pieces moving throughout the set to create different multimedia platforms in the show.”

Another thing that strikes us is how you get a so much depth out of a single color. Specifically, we’re thinking of the Linkin Park Burn It Down tour, where the stage was often lit almost entirely in red, yet it was a very textured field of different reds. How do you create this differentiation when using a single color?
“For me, each project requires an individually tailored color palette – not just in terms of its hue or tonality, but also in its saturation and presentation. With such a wide variety of lighting fixtures available, I pay very close attention to the details of each fixture and what they can provide me with, not only in terms of the density of its color mixing, but also in terms of the depth of colors they provide and things of that nature. I also incorporate a few of my ‘Travis Colors,’ which are usually given very witty nickname by one of my very accomplished programmers!”

Is it accurate to say that even though your designs are very complex, you tend to limit the number of colors you use on stage?
“Each tour has its specific color requirements. However, that being said, I do tend to stay away from the “Fruit Salad” looks we all have come to recognize, and instead go with fewer colors. Of course, as I make this statement, I am thinking about the current Enrique Iglesias tour, where for the first time in my career – I willingly did apply a rainbow chase to an upstage row of fixtures! This is further proof that each project and even each moment and each cue in each project is unique – and should be approached as such. You have to do what’s best for any particular moment.”

That being said at any given moment, do you have a color that you prefer to work with?
“No, not particularly – however, it seems that different shades of blue often find their way into my shows.”

What are the three most important personality traits you need to be a lighting designer?
“That is the MAGIC Question! But I don’t think THERE IS A MAGIC answer. Speaking for myself, being a designer is part of who and what I am. It’s a part of my everyday life. So much in my personal and professional life is interconnected. So, I believe that the same traits that make you the person you want to become, are the same traits that will make you a successful lighting designer. Back to your original question though, the three traits I would list are being humble, keeping an open mind about each project, and surrounding yourself with people who drive you to do – and be – your best.” What do you design your shows in?
“We use an arsenal of tools to accomplish our pre-production process: Vectorworks, Cinema 4d, MA Visualizer, etc. Really, there are a lot of great tools available to help the modern day designer.”

How do you get inspired to come up with ideas at the beginning of a project?
“Simple – rule number one at all times is to listen to what the client is saying. This rule proves itself to be truer and truer each and every day. I’m programmed to be a designer; so thoughts, concepts and ideas naturally come to me. However, to ensure that I achieve the show that my client actually wants, rather than the show that just I want for my own reasons, I need to pay careful attention and listen. Successful design is all about details.”

On the subject of starting projects, do you ever procrastinate before diving in?
“No, not really. That’s not a word I would typically use to describe my work ethic, unless you’re using it in a way that means stopping and thinking really deeply about a project before it starts. When you’re deep in thought, it can look like procrastination, but we know that it’s really something quite different. In general at the start of a project, I will prioritize my time and ration it so I can do my best work creatively.”

You’ve worked for so many great artists from different genres, do you have to like a client’s particular style of music to do a good job designing the show?
“Yes, without a doubt. I think to succeed in representing the client’s vision – and to satisfy my own sense of pride – I need to feel passionate about the music. I want to understand the dynamics of both the music and the artist fully before I start to build a show.”

Not mentioning brand names, but is there a type of fixture that you regard as most essential to your design? The one you’d never be without?
“Really for me, it’s always been about the design as a whole and not individual fixtures. Throughout my career, I’ve tended to keep my designs fairly straightforward when it comes to fixture selection. I’ve never been a huge fan of using a light just because it’s a hot new latest and greatest thing. My rigs are more meat and potatoes. It’s how you use fixtures in the whole concept that makes them stand out.”

Have you ever scrapped a design when you were close to completion and started over?
“Yes, no one likes to do it, but sometime it’s necessary, but that only when there’s a very clear and definite reason for scrapping the design. When a design is past a certain point though, it’s very, very unlikely that it will be scrapped. Of course, every design evolves from its original drawings, but this is very different from fully deleting a design.”

You seem to have a lot of fun with trussing – dressing it up in unique ways either with lights or various scenic elements to pull it more tightly to your design. How would you describe your approach to using truss?
“Yes I do have fun! As I mentioned earlier, I am a big fan of utilizing all of the production elements to create a complete design. Trussing is not just a structure for hanging lighting on, it’s the backbone of the design. I try to incorporate into my work in ways that are often completely un-related to lighting and video.”

At the end of the day, how would you describe the most important thing that a lighting design should accomplish at a concert or festival?
“Interesting question! I’ll give you an example, based on the Electric Forrest festival that I have been designing for years. Unlike most festivals where you want to keep things somewhat universal so that each artist’s LD can easily clone their touring show, the Electric Forrest festival wants a completely unique look of its own. I guess the experience of working this festival has driven home a point for me about the importance of uniqueness. I think the key to a good design is that it gives the artist and their LD’s an opportunity to showcase themselves on a platform in which showcases both the Artist and their LD’s talent. Even if it isn’t something that they are used to in their touring shows.

How did you get started in lighting? Who were your biggest influencers?
“I got started at a young age. My father became friends with a number of performers in Nashville. Over the years after seeing his friends at the Houston Livestock Show & Rodeo, I started thinking about the lighting as a career. Great LDs like Steve Cohen, Joe Paradise and Larry Boster were all very influential in the development of my career. I’m pleased and honored to call all three of them my friends today.”

What’s the biggest technological change of the past three or four years that has changed the way you design?
“That revolves around programming. I’ve had to step back from the programming side of things. I’m still very aware of the process, but with the time needed to handle all of the other aspects of production in rehearsals, I have found that it’s best to bring in colleagues who are familiar with my design process who can program while I deal with all the other elements involved.”

We understand that as a young guy you started out running the board for James Taylor? Do you ever still run a board?
“Oh wow, you’re really taking me far back! LOL Seriously though, yes I absolutely still run boards. Running a show is a great feeling. It connects you harmoniously to the performance on stage. What could be better? I wish I had the opportunity to run boards more than I do.”

How would you like to be remembered as a designer?
“I’d want to be thought of as someone who was a team member who always tried to achieve greatness, enhance the artist’s career and deliver a memorable experience to the audience.” 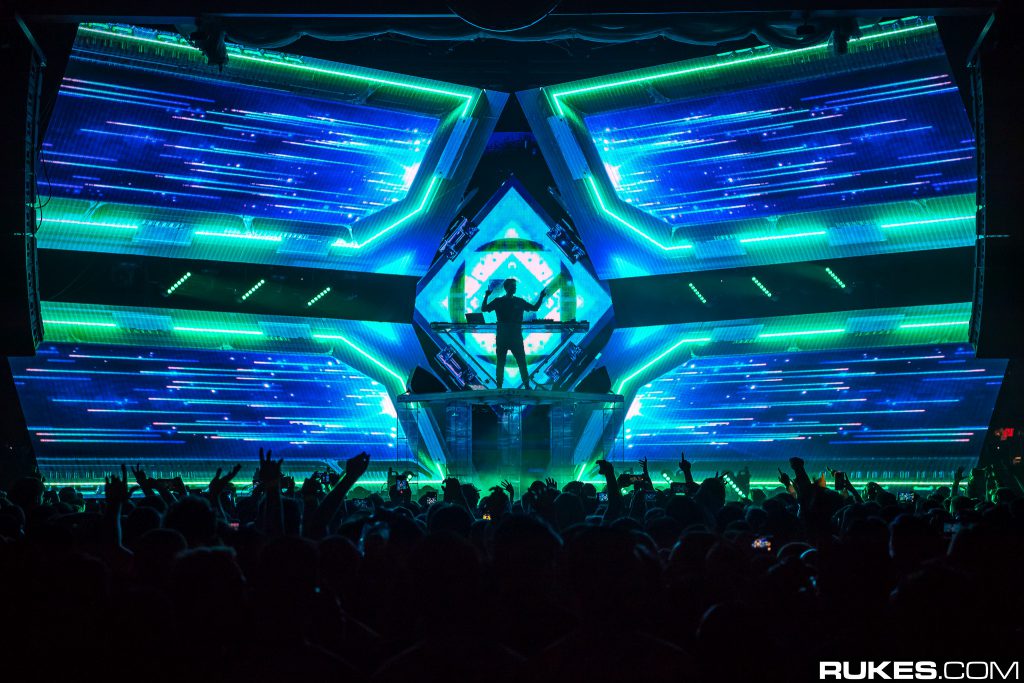